In Defense of Melania

I read an article last week that called for an end to the slut-shaming of Melania T (remember, I won't write his name) and because I agreed, I reposted it. It received a few likes, a couple of responses, and a share. After reading the responses, I began to think about slut-shaming generally and the quadrennial First Lady Pageant specifically.

Before I go down that rabbit hole, allow me to amend the cartoon depiction I attached to Mrs. T's husband last week. I initially chose Yosemite Sam, a classic Looney Tunes character that seemed most appropriate given his tendency to shoot from the hip. But the orange Mr. T is not a Southerner and in the updated Looney Tunes universe, there is a more appropriate character that you may not know, but should: 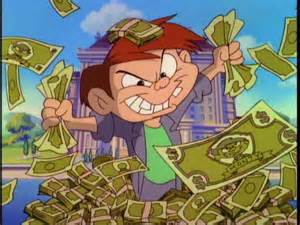 Back to Mrs. T. The past few weeks have turned an unflattering spotlight on her, the glare of which must be overwhelming. I feel a little sorry for her. She is merely married to the maniac; she is not the one running for office.

Of course, that means nothing in the quadrennial First Lady Pageant (and how ironic is it that Max used to own the Miss USA Pageant and the Miss Universe family of pageants). While typical beauty pageants rate the contestants on poise, talent, congeniality and the all important ability to model a bikini in stilettos, the First Lady Pageant potentials are graded on poise, education, child-rearing, patriotic advocacy, and cookie recipes. The swimsuit competition is replaced by an overall wardrobe competition.

The wardrobe competition has become more prominent in recent years with more attention paid to what the FLP contestants wear on a regular basis, instead of just the Inauguration Gown. Perhaps this is due to social media, which now creates more opportunities to take note of and scrutinize the attire of would-be First Ladies. Thus, Ben Carson's wife gives us the patriotic church lady; Laura Bush embodies the perfect modern suburban grandmother; Cindy McCain and Ann Romney serve up Marie Antoinette in America haute couture; and Michelle Obama shames us with her fabulously toned arms.

It is an unfortunate truth that women are judged on appearance whereas men are not. A man can wear the same suit and tie for eight straight years and no one will notice unless it is on fire. I have no idea if President Obama ever changes his ties and frankly, I would only care if it color coordinates with whatever Michelle is wearing. (Yes, I am admitting that I might be part of the problem...)

Melania was a model before she met Maxy and as models often do, she posed for some racy photos. Whatever she was thinking at the time, I am 110% sure she was not thinking that she would ever be a possible First Lady. More than likely she was thankful to be able to pay her rent that month. Which is why posting these pictures and then judging her is just wrong. Modeling was her JOB. When did we decide that potential First Ladies can only have certain types of jobs? When did we decide that the TITLE of First Lady was itself a job?

Of course, I blame Hill for this. She set the bar too high for her successors by being so darned accomplished. Yes, she does endure some wardrobe scrutiny, but now that she has settled on the power pantsuit as her uniform, we've already lost interest.

Melania, as a former model and wife of a viable candidate, is perfectly positioned to become the next First Lady in a catwalk-off. She can read speeches, smile, set fashion trends and champion whatever patriotic cause Maxy's people choose for her. Although she probably does not eat cookies, that should not stop her from submitting the best cookie recipe, ever. And she will look infinitely better in an Inauguration Gown than Bill Clinton...

To be clear, there are no qualifications for earning the title of First Lady, except that one be a woman married to the triumphant candidate. The better term is expectations--we expect that if we really are in the Twilight Zone (or have been left behind in the rapture), Melania will represent America with the same poise and grace past First Ladies have...in spite of her husband. Because Maxy's is the name on the ballot, we need to be far more outraged by what he says than to clutch our pearls in consternation over her pictures.
Posted by Ayanna Damali at 11:17 PM