These have been trying times. Such that folks have wasted too much time worried about Barack Obama's post-Presidency, but of course I should have expected that instead of indicting the grifting children of the former DESPOTUS or editorializing nonstop about Andrew Cuomo's epic fall, he is a more compelling topic.

This weekend, I had several hours to kill at my parents' house, and I spent that watching In Pursuit of a More Perfect Union, six full hours about Barack Obama from childhood through the end of his Presidency in 2017. It was interesting that this was airing while Twitter was all abuzz over an op-ed written by NYT gossip columnist Maureen Dowd* that was as usual, snarky and bitter after her third cocktail. I'm guessing her feelings were hurt because her invitation never arrived, so like any self-respecting Karen, she complained. 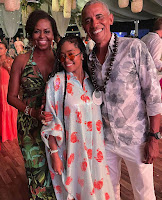 Do I have an opinion about President Obama's 60th Birthday party? Yes. I'm salty that once again, I didn't get to experience that most bourgeois of Black mid-life accomplishments--a vacation on Martha's Vineyard with the beautiful people. Maybe one day, and because I am putting that on my bucket list, I'm claiming it by my 50th birthday. I should also put actually meeting the Obamas on that list since my daughter recently shared with me her desire to thank Michelle Obama personally for introducing her to The Gruffalo.

(I've learned that the universe demands specificity on what we want and that kids think everything is about them.)

I really didn't think I needed to write anything about that party since I was not invited, and I would have imagined that most of the talking heads and keyboard hacks that are writing about it are doing so because it is a slow news cycle on the society pages. Which it should be since the world is in a crisis loop and we are all about to go on lockdown again. So I guess that justifies the kvetching about this shindig because Obama hosting a potential A-list super-spreader event is BIG news.

Shame on him! How dare he gets to be 60 years old and and still look well-rested and healthy after four years of Trump (when the rest of us look like hell)? How dare he earn enough money post-Presidency to own homes in Chicago, Washington DC, Hawaii, and Oak Bluffs? How dare he scale back his original super-exclusive guest list to a more uber-exclusive fete with his closest carefully vetted and vaccinated friends? Who does Barack Obama think he is???

That is the tone of every opinion piece and self-righteous tweet that has been circulating about this party, as if this man needs permission to throw himself a party. The audacity...when hard-working Americans are out here living their lives, he has the nerve to think that he ought to be living his too!

It's not like he's been throwing caution to the wind during this pandemic. He's been reading to children from his living room, writing his memoirs, producing content for Netflix AND advocating that we continue to wear masks and get vaccinated along with the other former Presidents. This was while the former guy was plotting an insurrection with the My Pillow guy and nudging the CDC to consider the feasibility of bleach injections. Obama rolled up his tailored shirt sleeve and urged his fellow Americans to get the vaccine, the groundwork for which began under the Bush Administration during the SARS outbreak of 2003. Still, he must shoulder the blame for those 500,000 deaths that occurred in 2020, three years after he left office. He could have done a better job of preparing Trump for a global pandemic. Instead of leaving behind detailed instructions, he should have left a pictograph.

But what do you expect from the first Black President other than a beer summit to soothe the hurt feelings of a police officer who arrested a Black man with a PhD for trespassing on his own porch? Everything with him was symbolic, nothing substantive like health care reform. That Obama didn't single-handedly end global poverty and famine, cure cancer, or usher in world peace are all indicative of his epic failures. Therefore, he doesn't have anything to celebrate, especially not a milestone birthday. He should lead by example and live in low-key austerity because no other former President is out here making such a spectacle of himself...

We should have known that Obama would fail humanity when he didn't personally plug that pipeline leak in the Gulf of Mexico. His callous response to Hurricane Maria was to throw rolls of paper towels at the Mayor of San Juan. Remember how he left all of those people to die in the Superdome after Hurricane Katrina? And what about his wife, Michelle "Let them eat vegetables" Antoinette? What did she ever do for America other than make J. Crew clothes look like high fashion? Never forget that she was too busy raising her daughters and working out with late night TV hosts to just squint by her man. In her typical tone-deaf global elitist manner, she swooped in on her broomstick to those border facilities wearing that jacket from Zara, a Spanish fast fashion retailer, because Ralph Lauren would never be that cheap or provocative.

Such a disgrace! But we can't resist the appeal of these rags to riches politicos who don't know anything about failing at business. Sure, these public servants can relate to everyman struggles like child care and racial discrimination, but not to the burdens of evading taxes and joy-riding into space. In a most distasteful display of nouveaux riche excess, Obama used the royalties from his book sales to pay off his student loans instead of going into default. And then he thought it was so altruistic to donate that Nobel Prize money, but still draw his salary as President to send his daughters to private school. Quite the grift, but what did you expect from a street savvy community organizer from Chicago?

Certainly not much empathy for the little guy who just wants to keep his family safe. After every mass shooting, all Obama could muster up were thoughts and prayers, but never any common sense gun legislation or even sufficient sympathy for the victims. His wife's idea of supporting Second Amendment rights was to bare her arms on the cover of VOGUE while he just sat there in the White House with his paint brushes assigning everyone a stupid nickname, like Heckuva Job Brownie and Turd Blossom. He single-handedly made race relations worse by shutting down Starbucks for a whole six hours to conduct diversity training and look at how much good that did? Now we're outlawing Critical Race Theory because Americans do not need to be ashamed of the racist indigenous names and mascots of their favorite sports teams. 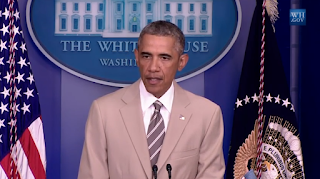 Never forget his many blunders on the world stage, such as that international incident of bad decorum when he wore that tailored tan suit to Buckingham Palace to meet the Queen of England. How rude of him not to give QEII back those thirteen colonies he appropriated instead of an iPod! What was he thinking when he put his hands on Angela Merkel or when he refused to attend a ceremony at a French military cemetery for fear of getting his hair wet? And speaking of flagrant disrespect for our brave men and women in uniform, Obama is the one who told Colin Kaepernick to kneel during Aretha Franklin's performance at his Inauguration in that hat. Recall the disdain he showed when he forgot to salute that Marine that one time he was in such a rush to board the helicopter? Only a man so in love with himself would realize his mistake and double back to apologize. Nothing at all like the bravado of the man who never served and denounced the heroism of a decorated Vietnam War veteran because he got captured and tortured.

That same man bragged about grabbing women by the crotch, so did we honestly think he had been faithful to his third wife after she had just given birth? Did we honestly think that the Leader of the Free World would not enjoy getting blow jobs under his desk from interns who were only slightly older than his daughter? During the Obama years of barely any salacious scandals, all we have to show for it are pardoned turkeys and crowded Easter egg rolls on the White House Lawn. And what of that terrible vegetable garden that he let Lady Arugula install on the grounds--he didn't even like broccoli! Healthy eating is so un-American. Real patriotism is serving McDonald's on the White House china to the kids who fly in from all over the country to their Nation's Capitol for the once-in-a-lifetime experience of having their picture taken in the Oval Office.

Obama was a terrible example for our children. He was polite, well-spoken, and thoughtful, but who wants their kids to see that every day and think that is how to get ahead in the world? Who has use for manners and common courtesy when cyber-bullying people on Twitter is a more effective way to develop one's vocabulary and character? Obama ought to be in jail for the irreparable harm his Presidency caused--by virtue of getting elected and giving this country HOPE...

He needs to be put in his place for inspiring a young idealist like Lauren Underwood (D-IL) as well as a determined advocate like Lucy McBath (D-GA) to have the audacity to serve in Congress. He deserves the blame for creating space at the table for Tim Scott (R-SC) and Raphael Warnock (D-GA) in the Senate; for convincing Stacy Abrams and Chris Jones (D-AR) to think that they could become Southern governors; and for paving the way for Vice President Kamala Harris to shatter glass domes and hopefully the entire ceiling. For all of the harsh criticism and over-analysis of the Obama effect during his eight years as President, perhaps his biggest impact is yet to be realized.

So now one last sentence on Ms. Dowd, for it would appear that having spent the better part of the last twelve years deeply offended that she will never get invited to the cookout, one wonders how it escaped her notice that the problem isn't how hard the Obamas are trying to be cool... just a dash of bitters for her next old fashioned.

Posted by Ayanna Damali at 7:22 PM