What Not to Wear

Every now and then, the Busy Black Woman feels compelled to offer unsolicited advice because well, I know things and this is my blog.  This past weekend, I was in New York City, the so-called Fashion Capital of the United States, but let me tell you, I saw plenty of unfashionable faux pas(ses) on the streets.  Mind you, I do not claim to be any kind of expert on the subject, but let's just say that a lot of ya'll need a Clint and Stacy intervention.

And no, this is not about the Emmy's...so, doing my best David Letterman impression, here are the Busy Black Woman's Top Ten Fashion Pet Peeves:

10. Team apparel - Americans love their sport heroes and proudly display their team preferences all year round, even in the off-season.  My disdain for team apparel reaches its zenith during football season because errybody and their mamma in DC is either a Redskin or Cowboys fan, but I don't care if you are wearing a football, hockey, soccer, basketball, or baseball jersey.  If you are not physically at a game, in a sports bar, or seated in front of a giant flat screen in somebody's living room eating hot wings and watching a game, then wear some real clothes. I do not want to be seated next to you and your children at church dressed in matching Lakers gear (and WTH)!

9. Stripper heels - Maybe it is because I am a tall girl and I think this obsession with higher and higher heels is over-rated, but the very description of this footwear suggests that no self-respecting woman should be teetering down the street in 6" heels.  The average woman can barely stand to walk around in heels half that height, so why in the name of all that is holy would you want to submit yourself to such torture?  Just say no to skanky ankle-spraining shoes! 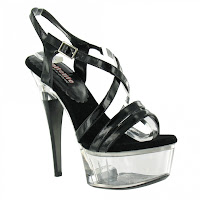 8. Brown flip flops on men - A few years ago this viral parody made the You Tube rounds and it was kind of funny when it was noted that every guy in Arlington wore brown flip flops (right around 1:57).  Then I noticed that it was not just an Arlington thing as brown flips are apparently the universally preferred summer weekend footwear for men.  Not that I go around judging men's feet, but maybe I wouldn't have such a problem with this look if women were allowed to walk around with ashy ankles, crusty heels and unclipped toenails...

Read more »
Posted by Ayanna Damali at 9:39 PM No comments:

Last year a hurricane was expected to blow through these parts, so I dutifully went about preparing by buying groceries for my parents, my aunt, my then-crippled brother and the husband.  While I did resist the impulse to stock up on toilet paper and batteries (since I already had plenty in reserve), I did buy lots of tea bags, freeze-dried coffee creamer, canned soup and crackers.  I also went by the stadium and got a couple of sandbags in case of flooding.

For this, I was mocked mercilessly by the husband.  What good are sandbags, he asked, if we do not live anywhere near the river?  That might be a head-scratcher for some, but I suspect that even if we never have to use them to guard against a flood, we always have the option to split one open to use for traction in case of an icestorm.  Mark my words, they will come in handy one day!

I am admittedly an over-preparer.  An over-planner.  I am not a Mom, but I would be a great one since I always have wipes, snacks and anti-bacterial hand gel somewhere in my purse or in my car.  I am that friend who can respond favorably when someone asks for an aspirin, Tylenol, Advil or a Motrin.

Read more »
Posted by Ayanna Damali at 5:17 PM No comments:

Email ThisBlogThis!Share to TwitterShare to FacebookShare to Pinterest
Labels: preparation

So Let Me Start By Saying...

This is the long-awaited recap of all the articles that I started, but never finished.  Instead of finishing them, I thought you might enjoy a little amuse-bouche of what I would have fully served:

Queen's Jubilee - I am a big fan of Her Majesty Queen Elizabeth II, so like a good former subject, I celebrated her 60th year on the throne by watching the ad nauseum Today Show coverage with Matt and...Meredith???

Ann Curry's Exit - I was a fair-weather fan of the Today Show until they curried Ann in favor of the perfectly bland and unoffensive Savannah Guthrie. I have to say that while everyone in America except Ann knew that she was at best an awkward fit, nothing was more awkward than how NBC auf'ed her.

Sarah Palin on Today - Yes, because if your ratings are slipping why not take a chance on the maverick?  After all, that worked gangbusters for John McCain!

Mitt Romney - Snooze button (I'll come back to him in a few).

The Olympics - I actually wrote a lot about the Games on the FB site. And the sum total of all I need to say: GO TEAM USA!!!

Meeting Michelle Obama - Yes, the Busy Black Woman can honestly say that she was at a White House event where our gorgeous First Lady made an appearance. But no, I didn't actually meet her...I did, however, take a somewhat fuzzy picture of her on my cell phone camera.

Growing older - My birthday is in a few months which means that someday (not anytime soon, but someday) I will have to change the advertising on my blog to say that these are the musings of a forty-something Type A personality. Yikes!

Mitt Romney - Snooze button...(give me in a few more minutes).

Growing older, part deux - Unfortunately, a side effect of aging is losing people. This summer felt particularly tragic for me because several people I knew passed away, including an aunt and the woman who gave me my first professional job. It is sobering to realize that the safety net most of us had while growing up is fraying; yet, because we are still here, it is being rewoven with us as the fiber for the next generation.

Soapy nights - I was not initially psyched about the return of Dallas until I saw the first episode and then I had to watch every single one and now I'm thinking that I need to join a fan page or something because WHOA!!!  (Oh, and I also liked what I saw of Scandal.)  So dear sultans of pop culture, if you have any compassion, you will usher out reality TV as quickly and efficiently as you did the macarena.

Mitt Romney - Snooze button...(last time, I want to talk about his convention first).

The Year of the Woman 2.0 - Is it me, or did the GOP really try to repent for its 1950s-like obsession with birth control and invasive ultra-sound procedures with Ann Romney?

Clint Eastwood - As I watched his speech, I kept reminding myself that this was the RNC Convention and not some random awards show where the cue cards got shuffled.

Posted by Ayanna Damali at 2:41 PM No comments:

I have been meaning to write for so long and have so many unpublished pieces in the cue that the only person left on Earth who still believes in this blog is me (and there are days when I'm doubtful).  But today I had a revelation that compelled me to write this:

Life just keeps going.  The only way to keep up is to keep moving.

So that means that instead of making excuses about how difficult it has been to write these past few months because every time I turned around there was some catastrophe that needed my immediate attention, I will just come clean and say that when I might have had a spare moment to write, I just didn't--I chose to sleep/shop/drink/whatever.  However, today I am choosing to write.  Later on I will get a drink.

But so what. Get up and get busy, Busy Black Woman! Inspire others to do the same. And have a drink after everything goes to back to hell.  Cheers!
Posted by Ayanna Damali at 6:13 PM No comments: