Big Fun With the Wretched

A woman in an online group posted about her child getting into trouble over the weekend and she referenced The Wretched episode of The Cosby Show. It was actually a stray line at the end of her post, but as soon as I read it, I immediately turned to the Hub and remarked how all of us of a certain age knew that reference. We shared a laugh, and my Niece who was nearby asked us to explain, so I pulled up a clip on YouTube. In recalling some of the specifics of the episode, I had gotten a few of the details wrong, so that meant that we watched several clips from different episodes until I realized my lapse in judgment and slammed my laptop shut.

To the Niece, I was over-reacting. At nine years old, she is aware of the Cosby revelations and his conviction, but she has NO idea how big a deal it is for me to actively avoid watching reruns or even how significant certain episodes are. Maybe this is just my issue (because a friend who listened to my lament told me that I could not wipe out that aspect of our childhood), but I cannot be the only person who gets a little queasy at the thought of Bill leering at the extras in between takes. At some point, I know that won't always happen, but damn. 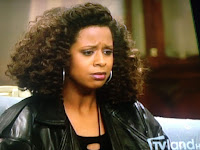 Before I came to my senses, I told the Niece that Vanessa Huxtable and I were about the same age when that episode aired (thus, Tempestt Bledsoe and I are the same age now). I have vivid memories of being a teenager who came up with some pretty stupid ideas of trying to evade a parental directive. Most of the time, I never got beyond my front door because I didn't have a crew of friends crazy enough to implement those schemes but if I had, I doubt that I would be here today to tell the story. So the most hilarious aspect of Big Fun With the Wretched is why we all remember that line.

We remember that it was a series of totally sitcom-y unfortunate events that led to the unraveling of Vanessa's cover story: the fire on the same block where the best friend lived; that friend's grandmother being interviewed on the local news; flaky Denise suddenly becoming a responsible adult who reads newspapers; the stolen car at a doughnut shop in Wilmington, DE where the cashier remembers Van and Co; getting scammed and stranded in Baltimore; and somehow making it back to New York City alive for the big parental confrontation. Perhaps you don't recall that specific sequence--I thought this was the episode where Rudy provided a shaky cover story that resulted in Claire and Cliff turning the couch around to greet Vanessa when she came home, but honestly, the details don't really matter. What matters was that climatic showdown with Claire repeating the line about Vanessa going off to have Big Fun With the Wretched (in your head, I bet you read that with the same inflection as she did)--and nearly killing her.

And that's why everybody in that online group probably had the same visceral reaction. A laugh or a chuckle or a shudder of a similar attempt to get over on our parents and the inevitable fallout from getting caught. We were all transported back to high school, when we thought that our parents were ridiculously stupid. Or like the woman who posted about her kid, maybe a few of those women recognized their own Claire reaction to some adolescent foolishness. Whichever side of that memory we inhabit, all of us acknowledge the sheer brilliance of that scene.

Which brings me back to this place of being frustrated by this entire shit-uation (yeah, that's my new word for it). It isn't like I can't live without The Cosby Show since I've done pretty well so far, but it just nags at me how that show captured the zeitgeist of my youth so perfectly. I mean, yes, there were plenty of other family sitcoms from that era that featured Black kids with professional parents...nope, Cosby started that. There were other shows with strong mother figures who were loving, but firm with their wayward children, but that also happened after Cosby. Surely there was another show with a similar story line that did not end with dramatic music, hugs and studio audience applause because what other reaction makes sense to lying and sneaking out, getting stranded with no money, and having to be rescued by your parents in the middle of the night?

Such was the genius of The Cosby Show. Sprinkled throughout its run, there were plenty of silly and random episodes such as those with dream sequences, the this-is-your-life-in-a-sitcom throwaways, and all of the celebrity guest stars, but those indulgences could be forgiven. As a lawyer, I still question why Claire would settle for a recording session with Stevie Wonder instead of suing him for side-swiping a car carrying her children, but that wasn't my call. I just know that 30 years ago when Vanessa and I were scheming teenagers, while Theo was secretly living with Justine, after Denise had returned from Africa married to Sandra's date, and while Sandra and Elvin were running a wilderness store and raising twins, the man who portrayed their father was...

Damn. And it's going to take some more time before I can sit with my Niece and my Kid to share that nostalgia without wincing. I just hope it happens before either one of them devises some mad-cap shit-uation that requires me to drive more than 100 miles outside of the city for a late night rescue from Wilmington in my pajamas because they're off having Big Fun With the Wretched.
Posted by Ayanna Damali at 1:11 PM No comments:

All Up in the Kool-Aid

If stupidity was a flavor, it would be the ubiquitous red Kool-Aid, and I swear some folks have it coming out of their faucets. Not only do they drink that mess, but they bathe and wash their clothes in it. I guess that explains why they love that red MAGA hat so much, because it goes with everything.

The Kool-Aid seems to flow on full force whenever the topic is race, which is everyday in America, despite what most would prefer to believe. Almost every issue touches that third rail, and even if no one believes this, high voltage is what makes the trains work. We can't run away from race; we have to learn how to work with it.

Last week it was this essay, written by my imaginary BFF Jemele Hill, that suggested a return to HBCUs by Black athletes. Football is not my lane, but anything that supports HBCUs is and so I agree with her arguments in theory, even though I know good and well that train has left the station. It would be nice, but HBCUs just cannot compete with the enticements and amenities offered at the marquee programs.

But can I tell you what train was right on time? The Kool-Aid car full of folks who were drinking full cups of the flavor I like to call Incredulous Red. How dare she make such a suggestion, that Black players segregate themselves by going back to the very schools that used to supply the NFL with its Black gladiators? What good can come from abandoning from The Big State U for a handful of schools located on the other side of the tracks? Martin Luther King would roll over in his grave to hear that some promising young man who has maybe a 5% chance of playing in the NFL would rather attend his alma mater and actually finish with a useful degree. It's racist to even say the word Black in a sentence!

Of course, that is usually the first round of responses brought to us by the same folks who miss the irony of colorblindness as a deficiency, much like tone deafness or talking out the side of your neck. Whenever a bunch of white folks start whining on social media about touching that third rail, just know that train is going nowhere. These are the folks that spot the capitalized B in Black and get triggered. These are the folks that claim hyphens are more divisive than actual racism. These are the "All Lives Matter" crowd, the folks who visit plantations for the architecture.

Right after that train leaves the station, here comes that little hand car that you've seen in the Wile E. Coyote cartoons, being operated by those thirsty black folks (small b) who've added too much extra sugar to their Incredulous Red drink. Folks like our little sister Candace Owens, who had the temerity to come for Hill on Twitter by calling her an insufferable idiot. Mind you, Candace hasn't even finished college yet, but we're talking about Kool-Aid, not spilling tea. Or this dude, Cornel West's evil twin who even had FOX's Laura Ingraham shaking her head in disbelief. And this guy, some comedian who's probably convinced himself that his rant went viral because he's funny...

Yeah, it never fails. But what gets me is their willingness to not only drink the Kool-Aid, but it is also the eagerness to mix it, serve it, and wash those red solo cups for reuse on the next trip. If that subservient description evokes some discomfort, then next time ask them why are they always the loudest and the wrongest ones with opinions.

Is there a special sweetener that they mix into that Incredulous Red that transforms it into Seething Self-Hatred Red? That must be a hard swallow to take on behalf of a bunch of folks who claim not to see color, so why should it matter if a few Black athletes seriously consider Hill's suggestion? Who would notice the difference? Unless the worry is that a significant number of Black players and their parents will do more than consider her suggestion, thus giving HBCUs a chance to be competitive in a system that was built at their expense...

What if it became the norm for HBCUs to win against programs that only play us now for exhibition purposes? What if an HBCU showed up in a primetime bowl game instead of the Celebration Bowl? I bet more of us would actually attend our Homecoming games instead of hanging out at the tailgate. We would have more to brag about than what the band played at the halftime show. And the Kool-Aid flavor we'd be serving--How You Like Them Apples Green.
Posted by Ayanna Damali at 11:12 AM No comments: