This Busy Black Woman has been an unapologetic supporter of both her alma mater and Historically Black Colleges and Universities (HBCUs) for more than 20 years. I had a revelation of sorts last week regarding a way to advocate more support for these institutions, which led me to launch a new endeavor called the HBCU Just Give campaign. 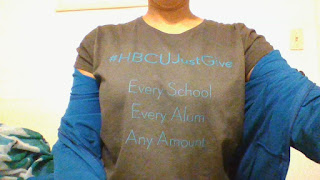 You can read more about my motivation here from the blog. This campaign will run three times a year and the goal is to encourage HBCU alumni specifically, but also anyone so moved in the social media universe to give a modest donation to an HBCU or to one of the scholarship organizations that support them.

The rationale is that HBCUs need their alumni to build upon the school pride that gets exhibited at various times each year--Homecoming, Founders/Charter Day celebrations, and at Graduation/Reunion. In my estimation, if we can commit to give during those times of year at a modest level based on something significant to each of us, we can boost alumni giving and make a symbolic contribution to our institutions.

For example, I chose to give at least $18.81 to my school, which commemorates the year it was founded. At three times a year, that amounts to $56.43 which is about what it costs for two adults to go to a movie nowadays...

That is not to assume that any donation isn't a sacrifice, but I bet most of us can manage.

For our friends who did not attend an HBCU, but still want to support the effort, we have a plan for you too. Give to the alma mater of a beloved friend, parent, teacher, etc. Surely you have had an encounter with an HBCU alum who had a positive impact on your life. But if not, then there are the two scholarship funds. If you remember those telethons Lou Rawls used to host or those commercials about minds being terrible to waste, then you are already familiar with the United Negro College Fund. And if you know anything about the state-funded public HBCUs, then you can give to the Thurgood Marshall College Fund. Either way, your modest donation will be appreciated and put to good use. (And the same suggestions apply--give whatever amount you think best honors your friends, family, sorority/fraternity, etc.)

And if you are not already following me on Twitter, please do @busyblackwoman and retweet the messages to your network of friends. Let's see if this effort can help raise more money for our schools and bring more alumni into the fold of regular giving!