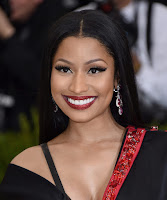 It was all fun and laughs when I first saw the social media reactions to this now infamous warning tweet posted by Nicki Minaj about her cousin's friend in Trinidad. I mean, who didn't snicker a little to learn that some dude's testicles allegedly swelled up after he received a COVID vaccine (when the truth is likely unrelated to getting the shot). But okay Nicki, keep researching...

And it continued to be humorous when various people weighed in with their snarcastic reactions to the vaccine and Minaj's tweet. In these crazy polarized times, we need reasons to laugh together. We needed to know that several very important people were so concerned about this dude's balls and Minaj's misinterpretation of the situation that it kept Joe and Jill up past their bedtime on the phone with the Health Ministry officials in Trinidad and Tobago. We were amused to see Tucker Carlson devote so much time and energy to addressing it (because he probably needs an excuse to offer his wife for his own swollen testicles).

But then it stopped being funny the instant I got the news of the death of a friend from high school.

It hits differently on every level as I had to administer a home COVID test in order to receive clearance to attend a memorial service this weekend. The plan is for me to take my Dad, who has essentially decided that he ain't driving anywhere outside of the Beltway anymore, so I volunteered to be his chauffeur. For the record, taking the home test isn't that big of a deal, and I guess it needs to become a fact of life now, so I accept it along with every other concession I've had to make in the past year and a half. Like never leaving the house without a mask.

Mind you, I took that home COVID test in response to a question on a COVID pre-clearance form to attend this weekend's memorial service where I had the option to lie about having traveled outside of the state in the past seven days. I told the truth, because that trip was in order to attend another memorial service for a relative in New York. We wore our masks, but some attendees did not, so it was probably a good idea to get tested out of an abundance of caution. The fact that some of us think like that and others don't is another adjustment to the new normal.

Then there is also the matter of the Kid and the fact that she cannot get vaccinated yet. In order to minimize her exposure, she didn't accompany us to New York, but that doesn't guarantee that she hasn't already been exposed at school where several children have tested positive and it has barely been two and a half weeks. That was the drama that began this week, accompanied by a 13-page confessional/accusatory letter by the parents of the infected. It hits differently when it becomes clear that we can do everything right and still...

Nicki Minaj's cousin's friend's got swollen testicles, so maybe you should pray and think twice about getting the vaccine.

I am not coming for Minaj, because it wouldn't have the desired impact seeing that her response and that of her stans would be to clapback hard. Particularly as one Black woman to another, the only benefit might be to generate some attention for this little passion project that I have been laboring away on for years without so much as .0000001% of her same impact. Thus, to piggyback on the point that Joy Reid attempted to make a few days ago, Minaj has a substantial following whereas I don't. She's an influencer. I'm an urban Mommy blogger. So if I did strike at the Queen, I better not miss, lest I be branded an Uncle Tomiana, whomever the hell she is.

But how about this instead: it doesn't really matter who comes for me because (a) nobody will and (b) I don't care. Furthermore, the worst that could be said is that I am an obscure nobody who is so very tired of every single asshat who keeps defending their dumbass takes on this virus and its impact. Fuck you and your vitamins. Fuck you quoting the Bible. Fuck you and your YouTube research. Fuck you and your personal freedom. Fuck your feelings.

And so that we're clear that this isn't about calling out another Black woman for saying what several others have said: Busta Rhymes, that SNL comedian whose name I don't care to look up, Eric Clapton, and anybody who voted for Larry Elder--FUCK ALL Y'ALL TOO!

I am soooo tired of COVID. Two weeks ago I had a meltdown over the prospect of having my Mom go to the ER over something minor that no one could diagnose. Because Google is not a doctor and her actual physician was out of town, the only way to have the problem addressed was to pay for medical transport TWICE. I am so tired that we are still debating the politics of masking because a few people insist that their discomfort is a civil rights issue (meanwhile restricting voter access and policing women's bodies are moral imperatives). I am so tired of worrying about who might be vaccinated because it isn't my business, yet if I get sick it becomes my problem. It upends my life and jeopardizes the health and safety of those in my family.

I am so tired because I have followed the rules and still the risk remains high. Because somebody's swollen balls in Trinidad are supposed to be more devastating than dying.

It all hits differently when you read the forlorn tweets of people you don't know who turn to social media to share the pain of intimate loss because that is how we grieve now. We cannot gather together as we once did to mourn or to celebrate without dealing with red tape on the front or back end, so we improvise and feign excitement or sympathy virtually. In reality, the only consistent emotion is ennui.

Admittedly, I did no in-depth "research" on the vaccine. I made my decision based solely on the fact that close to 600,000 people in this country had died by March of this year when I got my first shot. And I have not regretted that decision as just this summer, several unvaccinated acquaintances who contracted COVID died. I'm pretty sure that this particular friend from high school, a grown ass 50-something year old man, wasn't influenced by the anecdotal prospect of swollen testicles (and sadly, he was already gone when her tweet went viral). But whatever "research" led him to forgo getting the vaccine was dead wrong.

It hits differently because even as we make every effort to avoid exposure to COVID and resume some semblance of normal, we are stuck in this perpetual Groundhog Day of watching bad choices produce bad outcomes, yet no one has learned anything when the alarm goes off. We are 18 months into this pandemic, likely to get hit with another variant and winter is coming. We were sooo close to this being over, but instead we're waking up to Sonny and Cher again.

The irony--a song about having each other's back. We know how that turned out for them, and look at where we are now...

And because shots were fired and Sis was out here on Blue Ivy's internet re-tweeting Tucker Carlson and Candace Owens, like really? You've aligned with Boris and Natasha because they care about your cousin's friend? More importantly, because they care about the fact that Black people comprise the lowest percentage of vaccinated adults in this country (26.3%) and represent the highest percentage of COVID-related deaths? Two people who have been heavily invested in the Big Lie, have an ideological axe to grind, and as such only care about TV ratings and going viral by picking Twitter fights--the TV dinner heir and a thirsty clout-chaser with no job? You went hard against Joy Reid for expressing her disappointment in your tweet, but no smoke for Carlson and Owens who have collectively disrespected nearly every Black woman who disagrees with them, including some of your fellow sisters in rap such as Meg Thee Stallion and Cardi B.

Hold up, this is really about your beef with Cardi B? Ain't that some shit! Are you sure that you aren't the one being used?

Before it was dis tracks and record sales, but it all hits differently because of COVID.

(I had finished writing and had published this piece, then things went from sad to surreal later when I saw more insanity on Twitter. The Barbz had taken to Twitter and to the streets of Atlanta in defense of their Queen. Whew, y'all have conflated issues and yep, this is that point in Groundhog Day when Phil Connors the weatherman keeps finding more creative ways to kill himself.)

So one last point, because it needs to be said: nobody has made any attempt to silence you or any other person who has expressed genuine hesitation about the vaccine. Doubts can be useful to provoke dialogue and offer clarification where there is confusion. What you tweeted was labeled as misinformation, and last I checked a 24 hour Twitter ban isn't imprisonment, nor is it a punishment since you have other means of communicating to your followers. And what's more disingenuous is to dig into your position as if all of these high-profile busy folks didn't take time to investigate and address that nonsense. You are reacting to becoming the butt of late night jokes, not some secret illuminati plot to get you to shut up. It is precisely because of your visibility and reach to over 20 million folks--acknowledgement of your influence that prompted the range of responses.

It appears that fame, influence, propaganda, and loud speakers do make for shaky platforms that cannot withstand a whiff of debate or dissent. And it all hits differently because of COVID.

Posted by Ayanna Damali at 1:57 PM