If we needed any concrete proof that our country is knee-deep in shit right now, exhibit A continues to be the Energizer Bunny persistence of the disgraced former DESPOTUS, still holding super-spreader rallies to whine about losing his job. Exhibit B is tabloid clickbait, because no, I am not blown away by how good Heather Locklear looks at 60 with her new lesbian partner, Drew Barrymore. Exhibit C is the revelation that a lot of very loud men are both homophobic sexist pricks and terrible absentee sperm donors.

That last example comes courtesy of the social media musings on the news that Pete Buttigieg, Secretary of Transportation, took two months of paternity leave after welcoming twins. That he and his husband Chase would both opt to stay at home to care for two babies while most of the federal workforce is also still working from home due to COVID is the epitome of...something that makes this Tim Taylor gif seem totally appropriate.

What a bunch of wusses. And yes, I m referring to the fraternity of man-baby bros who think telling Dad jokes about breastfeeding are funny. (God forbid a kid with no teeth gets nipple confusion.)

Leading the charge of criticizing Buttigieg is Tucker Carlson, the frozen TV dinner heiress whose most challenging daily decision is whether to bring back the bowties and sweater vests as his signature look. His tag team partner is a fellow conservative Dad of four named Matt Walsh, whom I'm guessing is also still working from his basement judging from the background in his videos. That the defenders of detachment parenting are Carlson and Walsh, two guys who went to prep school and would probably run a craft brewery with Brett Kavanaugh if they weren't assholes is...rich. Tough Dads in the send-them-off-to-boarding-school tradition, for sure.

However, stooping to their level by ridiculing them isn't why I'm here. Nor is it to defend Buttigieg, a man about as interesting as a glass of milk. He withstood some below-the-belt sucker punches for taking time to be present for his children, something that should be laudable to the family values set. But I forgot, they long for a return to the Leave It to Beaver days when the most important jobs for Dad were to read the evening paper, mow the lawn, and look concerned when one of the kids had a problem. A lot was assumed and superficial about those 50s and 60s era TV Dads, but we'll come back to that later. The point is that for all of their big talk, guys like Carlson and Walsh couldn't manage two hours alone with their children without back up from their wives, so picking on Buttigieg isn't even about parental engagement.

Of course it is several shades homophobic, which is easy enough to denounce. And we also know that guys like them were hardly at the top of the adolescent social pyramid, so making fun of the Buttigiegs is a playground defense mechanism that still works all of these years later. To avoid getting stuffed in their lockers, these dweebs found someone else their own size to pick on which is why they think it makes them look tough to diminish the work of women as primary caregivers. Taking care of a newborn baby is just breastfeeding and cleaning up poop, they proclaim, and no 'real man' needs to use his paternity leave for those tasks. 'Real men' can accomplish the job of being present in five easy steps: (1) taking the car seat to the local fire station to have it installed; (2) driving the mother to and from the hospital; (3) not passing out during the birth and cutting the umbilical cord; (4) emptying the Diaper Genie every night; and (5) making coffee every morning before heading off to work.

All of that can be done without breaking a sweat. Therefore those detailed lists of household chores that were posted by several modern Daddies in response to Carlson and Walsh's obtuse pronouncements are the kinds of responsibilities that get outsourced to other female relatives or the hired help. 'Real men' don't fold laundry.

A 'real man' who feels the need to proclaim on Al Gore's internet that he did not use his paternity leave is obviously projecting the veneer of toughness to distract from his inadequacies. It's a weird flex to forgo using an employment benefit that most people don't get. It is very similar to the tone-deaf brag of not contracting COVID at a Trump super-spreader rally, but only because you gave your ticket to someone else who did. You got lucky Tuck, whereas the average new mother barely gets three to six weeks of unpaid maternity leave. You are blessed Matthew to have a benefits package that provides some manner of support to your family and respects the contributions that can be made by the two parent households you tout as ideal. That you opted not to use it because you want the admiration and respect of other 'real men', like this gem of the ocean...otherwise he'll call you a pussy and stuff you in your locker?

So let's deconstruct all of that. Lockers are cramped spaces and it's no fun getting shoved into one over a long holiday weekend. Pissing in your pants is definitely not cool either. And being called a pussy is a taunt that no 'real man' can afford to let go unanswered. It is much more acceptable to be called a dick--an apt description for all of these 'real men' out here who make their living as professional whiners. Bragging about not using paternity leave must be the 21st Century social media equivalent of buying a sports car. Good luck keeping those seats clean now that you have kids!

The true reveal here is how the views of these 'real men' reflect workplace policies that treat the birth of our children, indeed the entire existence of family, as a disruption. Work is always their priority. In theory, parental leave is supposed to give new parents time to adjust to the upheaval of caring for a new life; instead, it is regarded as an inconvenience, subject to the cost-benefit analysis of how much time can one afford to stay away from one's job. As previously stated, most new mothers are lucky to get unpaid leave to keep their jobs, and most new fathers barely get enough time off to provide meaningful support other than those five tasks. For these families, one or two missed paychecks are all it takes for them to descend into financial ruin. So who can afford family leave?

'Real men' like Carlson and Walsh can take a few paid days off, but they would rather brag about having fathered four children while their wives breastfeed, clean poop, and cut their meat. 'Real men' don't use their paternity leave to stay home with sick children or to attend parent-teacher conferences. 'Real men' don't take time from work to advocate for their elderly parents, let alone visit them at the nursing home. 'Real men' can't really take care of themselves without co-dependence on a wife or a personal assistant. Yet, 'real men' can and will defend an exploitative system of labor that grants them meager privileges they dare not use lest they be mistaken for...women.

Because it is women's work to perform the domestic labor of raising children, housework, cooking, shopping for the household, planning vacations, keeping up with relatives and friends, carpooling, caring for elderly parents, etc. Or it gets delegated to other women in low-paying jobs that don't offer any kind of leave. 'Real men' ought to be at the forefront of arguing for workplace policies that support families and protect workers. Instead, these dudes would rather be modern-day overseers, wielding the whip, yet and still sweating in the fields, grinding in the factories, digging in the mines, serving at the pleasure of the master/owner/game show con man former DESPOTUS. 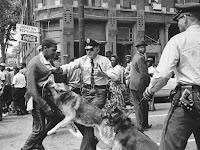 Real men, traumatized by the prospect of seeing their graven idols to a Lost Cause moved to a museum:

Real men, triggered that Pete Buttigieg, a man who shows up for duty to country and family, isn't worried about your childish taunts:

Posted by Ayanna Damali at 2:05 PM