Harriet Get Your Gun 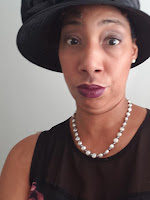 For the record, my face is not tight like this over the fact that I missed Homecoming AGAIN...It is like this because I swear, some of y'all really need Jesus.

Let's cut straight to the point--yep, Ye is cancelled, and I don't want to hear anything about his genius or his mental health because none of that has ever been persuasive to me. As far as I'm concerned, he's been done since I wrote this piece back in 2018, but back then I was hoping that some divine intervention might save him from himself. It didn't, and after this very bizarre year of watching him turn every shade of misogynist, anti-Black, and anti-Semite, well, there isn't much else to say. It is above me now...

A few months ago, I had MSNBC on in the background while I was writing and some rapper popped up in a segment with Ari Melber, which wasn't unusual because he is a definitely a hip hop fan boi. Now, I need to say this as a disclaimer because I honestly did not know who his guest was at that time, but I did stop to watch because I used to find those segments kind of entertaining. However, in under one minute, dude insulted Rep. Jim Clyburn (D-SC) and the hairs stood up on my neck as I wondered, who the eff is this and did he just say that isht on television? So color me not at all surprised to see how this same ashy dude resurfaced on Blue Ivy's internet to sing the praises of Gov. Brian Kemp (R-GA) earlier this month.

Before anyone argues that Killer Mike has every right to endorse or vote for whomever, save your breath. I get that. And if he wants to shout it from the rooftops that he would prefer to keep the devil he knows instead of voting for someone else, then that is his business. This is America. Mike doesn't need my permission to vote for anybody. (For what it's worth, I wrote that without rolling my eyes or crossing my fingers while typing.)

But he shouldn't expect not to be called out for it.

Perhaps he saw what happened when Ice Cube decided to try his hand at being a modern Race Man and introduced a Contract with Black America in the closing days of the 2020 Election cycle. Earlier this week, a clip resurfaced from an interview he did with Graham Bensinger in 2021 that referenced his ill-timed foray into politics. My initial reaction was to think, so you're back for more smoke, huh Ice Water? Because right now, just as we are two weeks away from an election that might determine the future of our democracy, we definitely should be having a conversation about why Joseph Robinette Biden, Jr. hasn't reached out to you, O'Shea Jackson, Sr., to discuss your policy proposals for Black America.

Were we supposed to believe that Cube's been waiting by the phone for an invitation to the White House for two years??? That in between performing at NASCAR and building his Big3 League basketball endeavor, he didn't have time to get his COVID vaccine but he had time to wonder why his calls kept going to Biden's voicemail. That when he blew off that meeting with Madame Vice President as if she was some kind of note-taking intern, Dark Brandon was going to forget that? Bye Felicia!

However, as Cube himself pointed out, this clip is a year old and in his own words he's sitting this election out. So for now, I have erased the snarky tweets in my drafts, reserved judgment that nefarious motives are at play, and will simply suggest in the alternative that maybe you should care if and how folks are planning to vote. Because if you were at all serious about implementing policies to improve our community, Ice Man, then you should not have been so easily dissuaded by Black Twitter trash talk.

Because here is the problem--too many people believe that the work of revolution is as simple as writing a solid business plan. If that's all it took, we wouldn't be here teetering on the edge of Armageddon and the Apocalypse.

In case Killer Mike or Ice Cube come across this blog and see their names written here, I need them to know that I am not arguing that they should just stick to rap music. On the contrary, we don't need them to shut up; we need them to speak up more often. We need more men with platforms of influence to weigh in on the issues that impact our community. Talking amongst themselves in the barbershop isn't enough. We need them to lend a hand, to do some of the heavy lifting, and to stay in the fight, even when things don't go as planned.

When Harriet Tubman went back to her former plantation to rescue her family and friends, she did so at great personal risk. She was a fugitive and under federal law, she would have been returned to enslavement and sold further South if she had been caught. The legend of her threat to shoot anyone who got cold feet on the journey North is an important metaphor for what we face in our community from folks who would rather settle than fight. It wasn't just her life, but the lives of everyone she was trying to save. That is what makes the work she did in her later years so much more inspiring, like when she served as a Union spy and militia leader during the Civil War. She kept on fighting.

If you opt to sit on the sidelines or decide that the status quo is tolerable because you got to eat the scraps off Massa's table, then like Mother Harriet, I'm good with leaving your Black ass behind on the plantation. Or shooting you if you get scared and decide to run back.

Words are my weapon of choice, so yes, I will unleash a few bullets of criticism if I think your choices are more harmful and selfish than helpful. I will point out that your Contract wasn't a bad idea, just a re-packaging of Tavis Smiley's Covenant that includes many of the same legislative policy agenda items proposed by the Congressional Black Caucus. (Historically, similar proposals have been put forth by the Niagara Movement, the Atlanta Student Appeal for Human Rights (1960), the Black Panther Party's Ten Point Plan (1966), and the National Black Political Convention (1972), just to name a few). Sure, Donald Trump took a meeting with you in 2020, but did you follow that up by meeting with Mitch McConnell or anyone else in the GOP Caucus? Have you been calling on them to do more than listen to your concerns since you believe that the other side hasn't? If the GOP regains power in Congress, have they assured you that your Contract will be part of their agenda and that the legislation that has already been introduced and still pending will move forward?

Or, as you so eloquently twote, do you just not give a fuck?

To my one-time Morehouse brother who has been tweeting a lot, but not telling us much, I've got issues with this Aaron Burr act of yours. When you took that meeting with Brian Kemp and had all of this advice for Stacey Abrams afterwards, you did understand how it benefitted Kemp to pay lip service to Black concerns while promising to do the bare minimum. After participating in that photo opportunity with you, he didn't even need your official endorsement since all he had to do was demonstrate a willingness to sit and talk football or whatever (since in your own words, politics and policy don't matter). Which is great at any other time except for an election year because y'all could have met for some craft beer in 2021 to discuss the finer points of vocational education.

As for what you said about Rep. Jim Clyburn and the Democratic Party on The Beat with Ari Melber this summer (no I have not forgotten that), that may be why the good Reverend Senator Warnock hasn't been returning your calls to appear on your show. You went on national television and called a civil rights icon a sellout because y'all didn't support the same candidate. Then you assumed that the Senator would not take that kind of insult personally? Now with the tables turned, isn't that why you've been responding to folks on Twitter who have been saying the same thing about you...

I know you have your reasons, and you are under no obligation to disclose how you plan to vote, but you do understand the damage that can be caused by sitting on the fence. If you want to be respected as a kingmaker, the responsibility for safeguarding the crown is equally heavy for the person who performs the coronation. This generation's MLK may very well be a rap artist who is willing to sit down with friends and foes alike, but it might help to clarify who's who.

Furthermore, while y'all are worried about who gets to be a King, armies of Harriets have been busy registering voters, canvassing door-to-door, writing postcards, phone-banking, organizing, and staying otherwise pre-occupied with the work of saving this fragile democracy in less than two weeks. I know this because that's what I've been doing. I don't have the luxury of being able to call up my Spelman sister to offer advice and have it matter. But I have the choice to roll up my sleeves to lend her campaign a hand. I helped to get your Morehouse brother elected two years ago as well, and in gratitude, he's been blowing up my phone with fundraising appeals. Just as Kemp had to seem willing to talk to you, Abrams and Warnock have to play a version of political three-dimensional chess too.

And here is where I need to break through that third wall because I got caught up with being busy and didn't publish this piece two weeks ago as intended. I am currently in a hotel room in North Carolina, about to head out to do some canvassing for a few hours before I head down to Georgia to work as a poll monitor. Election Day is two days from now.

Since we are just days away, I need to end this rant with a blunt observation for brothers like Killer Mike and Ice Cube because what I'm seeing in these streets is real. The folks that have been in power believe that we are encroaching on their way of life, and they aren't looking to share or lose any ground. They don't regard us as equal participants in this democracy unless we align with them, which does not seek to elevate us as a community, just individuals. This has been the playbook for centuries--and that is what prompted women like Harriet to escape and eventually work to dismantle the entire system. We are no better off if only a few of us are free.