A couple months ago I was in Atlanta and observed an all-too familiar phenomenon--Busy Black Woman cell-phone coaching. Or put another way, a woman was on the phone with some poor clueless person (significant other, child or supervisor) who was obviously dependent on her to keep the world upright on its axis.  In the scenario that I witnessed, a woman was giving directions to someone from 600+ miles away.

Now the humor in this is not the other person's failure to use a GPS, but it is the fact that this sister excused herself from a social event several times to speak to the same person!  And even funnier was the fact that at least three other women had to the same thing...

I've done it too.  During that same weekend, I had to excuse myself to take a phone call to give instructions to family members.  Except in my case, the scenario was not at all funny as this was an emergency regarding my mother.  Of course, I doubt that it ever occurred to anyone back home that there was very little I could do from 600+ miles away. 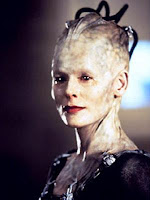 I suspect that many of my fellow Busy Black sisters find it exhausting having to think for the collective, kind of like the Borg Queen.  Fans of Star Trek will remember that she was the only individual among the drones in the borg cube.

Come to think of it, quite a few of the most formidable leaders in the Star Trek pantheon were women--the Dominion, Kai Winn of Bajor, the Romulan Commander Sela, T'Pau of Vulcan, and of course, Captain Janeway (yes, I am a Trekkie). But I digress...

The point being, the person who takes the lead, takes the fall when train goes off the tracks.  I cannot begin to tell you how often I hear 11 million versions of the same excuse: you didn't tell me what to do so (a) I did nothing; (b) I did it wrong; or (c) the blank stare.

Can a sister get a break? Can I trust you to use the common sense you've gained from several years of living on this planet, or to use that expensive education that you are so proud of to make just one decision that does not require my approval?  Or better yet, can I trust you to think outside of the box and do what I would do in the same situation?  Do I sound like one of the adults from a Charlie Brown cartoon?!?

Woosah! Namaste! When is Happy Hour?
Posted by Ayanna Damali at 12:00 PM