This Busy Black Woman does NOT do football.

I have been known to watch a game if I'm in a place where there are no other options. When I was a kid, I watched because I lived in a house full of men and there was only one color TV. Also, and more importantly, that was the only way to get some of my mother's onion dip. And of course, I had the fever the years the home team* went to the Superbowl, especially in 1988. In college, I was a dancer** in the band, so I had to attend the games and actually enjoyed going in the years after. Until recently, I was known to enjoy Superbowl parties and certain halftime show performers.

But in hindsight, my interest in football was only because of the onion dip, home town pride, band camaraderie, social engagement with others, and the Superbowl halftime show. I never really cared about the games or the outcomes (except when it involved the home team).

Which leads to my first reason: the name of my home town team has been the subject of controversy for the last 20 years or so. And as a self-proclaimed professional protestor of injustice, I join with those who find the name offensive and simply refuse to care until they change it. That puts me in the minority in a city where folks bleed burgundy and gold, but I would rather be unoffensive, unpopular and uncool.

My second reason: I am a Busy Black Woman! My attention span is about 8 minutes and while football is by no means as painful to watch on TV as baseball or golf, I just don't care enough (even if my Mom could whip up a batch of her onion dip).

My third reason: football is violent, both on the field and in real life. I've followed the news reports of athletes involved in all manner of domestic violence. And I saw that film Concussion with Will Smith. So...

ALL of that preamble is to get to this point: I would not have given two craps about Colin Kaepernick until last week precisely because I DO NOT do football. But this headline compelled me to write. Because you've got to be kidding me! 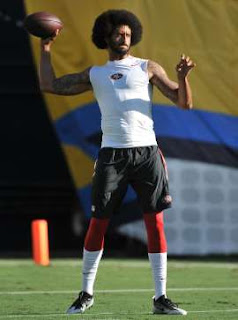 I could spend a LOT of time posting links to the countless stories of players involved in various controversies. Like the Baltimore Ravens player who punched his wife in the face on an elevator. Or the Pittsburgh Steelers quarterback who has been accused of sexual assault, twice. Or this dude.

You mean to tell me that a man who decides not to kill someone, not to abuse illegal performance enhancing substances, not to leave his pregnant wife for the intern, to only do interviews to avoid being fined...this dude Kaepernick is hated on the level of Rae Carruth, the heartless aardvark who engineered a hit on the mother of his son to avoid paying child support? Rae Rae, whose crime was so horrific as to inspire an episode of Law and Order???

Are people really more upset by the behavior of athletes during the anthem than when they are in the real world saying and doing stupid things (Hope Solo anyone)? How many people even knew there was a third verse to the anthem that referenced slavery? Your faux patriotism is tiresome.

Since football has replaced baseball as America's favorite sport, Kaepernick can and should use his platform to protest the police behavior that has resulted in the deaths of unarmed citizens who happen to share his skin color and ethnic background. The fact that some folks never realized he is part black is irrelevant. The fact that he gets paid a lot of money is irrelevant. The fact that he is recognizable enough to probably never have to face the circumstances that might put him on the other end of a "controversial" police incident where no one would be held accountable...is irrelevant.

He is standing up and speaking out like Jesse Williams did at the BET Awards earlier this summer. He is building on the protest waged by WNBA players from the Washington Mystics, New York Liberty, Indiana Fever and Phoenix Mercury in support of Black Lives Matter. He is answering the call issued by Carmelo Anthony, LeBron James, Dwayne Wade and Chris Paul at the ESPYs.

Apparently Kaepernick is (a) doing something right; (b) going to pay dearly; and (c) doesn't care. If the Forty Niners fire him, if he gets blackballed by the other teams, if he gets death threats from patriotic trolls, if he suffers a curious season-ending injury on the field because his teammates are cowards and his opponents are paid mercenaries like those Saints players from a few years ago, then we need to admit that our country's pastime is not football or baseball but whining about the nonexistence of racism. If you fought and bled for this country, then your skin should be a LOT thicker. And if you aren't a veteran, then your opinions are (you guessed it) irrelevant.

Yet, if you feel compelled to hate on Kaepernick for exercising his rights, you are entitled. And you can believe the unicorn when he claims that racism no longer exists too.
Posted by Ayanna Damali at 11:12 PM