A Life, a Job and a Haircut

I was a teenager when I first coined that phrase as a potential insult...but I am pretty sure that I never had the balls to use it as intended. Among friends I was known to say that so-and-so needs to get those things and it got a few laughs. And I remember that back then, hurling my great imaginary zinger was really more about how my friends reacted than actually saying it to the target of the insult.

The Busy Black Woman has decided that in this social media climate of hyperbole and meanness, it is way past time for to resurrect that phrase because there are sooo many folks in dire need of a makeover:

Starting with the King of the Trolls, the current GOP candidate for President might not need all three, but most of us would appreciate if he finally got a better haircut. Seriously. He could also use a life, since when does someone who is running for the most powerful job on the planet have time to tweet insults?

His sister from another mister, Sarah Palin can definitely benefit from all three. She needs a life so that she can get a real job because being a professional twit (terer) is not what we expect from someone who almost could have been the Vice President. And she might want to do something with that hair.

The Governor of Maine, Paul LePage, is allegedly considering the need for a new job. I cannot speak on his need for a life, but that might be necessary if his new job involves relocating to another state, like Arkansas. And he might as well go and get himself a shape up...Ray Ray's chair at Close Kutz is waiting for him.

Pastor Mark Burns needs a life and definitely a new job. Who attends his church, those angry black Republicans from that Key and Peele sketch? He's bald so no haircut, but he might need to reconsider those colored contacts.

Ryan Lotche did get a new haircut after the old-new haircut made him look like the infamous entitled all-American a$$ aardvark. And apparently, he's got a new gig on Dancing with the Stars, so maybe he's good for now.

Anthony Weiner. Whew, all three dude, and like yesterday!

And speaking of Hillary Clinton, who is hoping for both a new job and a new life...let's just wait to see how she botches both endeavors with another ridiculous scandal. I like her haircut, though.

The trolls who came for Gabby Douglas at the Olympics need all three. New lives because Grandma is tired of you living in her basement. New jobs because being the manager at the Chik-fil-A is still a sucky job even if you were promoted from cooking the waffle fries just last week. And haircuts because all of that concern about Gabby's edges probably means that you paid entirely too much for whatever hot pink messiness you got going on your head. And if you happen to be one of those I-wear-the-American-flag-on-my-a$$ trolls who attacked her for what was deemed insufficient patriotism, it is way past time to change your underwear. Seriously.

Ditto for those who have been coming for Leslie Jones.

And finally, there are the trolls who allegedly dissed little Blue Ivy Carter. I am by no means a member of  the Bey hive, but I saw that gorgeous photo of Bey and her daughter and wondered how I might recreate the magic captured in that iconic image. So color me shocked to learn from the Facebook that some aardvarks reacted by saying all kinds of nastiness about Baby Blue. Need I remind you that she's a kid, y'all. When did it become okay to talk badly about a four-year old? So, I declare an acute and critical need for lives, jobs and haircuts! New lives would require an evolution up to the human species, but try that and let us know how that works for you. How about you just get a job, any job? And new haircuts, wigs, better weaves, whatever...because that troll look is just tired. 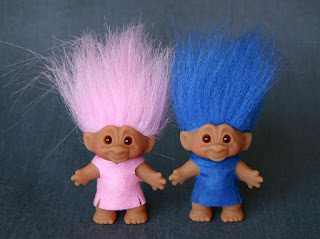 Email ThisBlogThis!Share to TwitterShare to FacebookShare to Pinterest
Labels: distractions