Call of the Wild

I don't need to tell anyone who has a toddler that this has been quite a year. I've probably already told you several times that I am in way over my head. To borrow a phrase from my Spelman sister DYN, parenting ain't for pussies! So if the Babe makes it unhurt to midnight tonight, I ought to do a cartwheel. In fact I need to do an Olympic caliber floor exercise.

Yesterday could be categorized as an epic Mommy fail because I had good intentions that went awry as soon as I took my eyes off the kid for a few minutes. I was on the phone in the bathroom, she opened the door, and then she walked off with her toothbrush and toothpaste. I am unsure how much time elapsed, but when I last saw her she was watching TV.

I wrote this recap on the FB page, so feel free to enjoy the short version.

Now here is the long version, augmented by several of the details I omitted. So I mentioned that I was in the bathroom and the she had taken her toothbrush and her toothpaste with her into my bedroom, found a quiet spot on the floor in front the TV, and was busy watching whatever was on PBS Kids for a few minutes while I was on the phone. Right there, several veteran parents should be shaking their heads.

For the rookies, you need to know that my first mistake occurred long before I left the Babe to her own devices. My first mistake was to get the Babe dressed and ready before I got myself dressed and ready. You see, my plan for the day included a few errands on this side of town before we were to be at my parents' house by 2pm. I had my itinerary mapped out, I was showered, so I just needed to get dressed and to pack the car.

I was dilly dallying on the phone and it was about 11:30 when I realized that she was too quiet and discovered her covered in toothpaste. We didn't leave this house until 1:30. My FB status update came just before 2pm while I was waiting in line for gas at the Costco. I had just texted my Dad to let him know that I was on my way to the house per our understanding that I would relieve my mother's caregiver because my brother was out of town. I also texted the caregiver to let her know that I was running a little late. In response, she asks me to get a few things.

Mind you, I am sitting in the car with a finally napping toddler, watching the parking lot at the Costco fill with folks anxious to stock up for the holiday weekend. 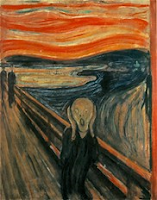 I scream because I am not a doctor and cannot just decide to abandon a recommended course of treatment for my Mom, even if I don't like the side effects without discussing it with the doctor first. I scream because I want to be a good Aunt, acknowledge that I am not perfect and will try to make up for my shortcomings, yet sometimes wonder if it matters. I scream because the so-called terrible twos came at 18 months. I scream because while I truly appreciate the suggestion of a girls' night out, it ain't never gonna happen. Same is true for a date night. Hell, I can't even get anyone to meet me for coffee.

I read your suggestions. Naps are what the Babe refuses to do without a battle of wills. I know how to say no. And no, I don't say it nearly enough. Or whenever I do, it is as an apology: No I can't hang out because I am needed across town or because the Babe is covered in toothpaste. Other people probably have survived and I appreciate knowing that there is light at the end of the tunnel. I also appreciate that my journey is personal and unique to me so it should be okay for me to whine every once in a while without being reminded that other people have endured worse. And prayer is good, especially if you know that others are praying for you as well. Even better if somebody would call me just to check in too.

Motherhood is a lot of things. The cute pictures posted on FB are taken in those moments when we are not being kicked, pooped on, interrupted while using the bathroom, having food tossed onto the floor, chasing someone around a restaurant or store, negotiating nap time, or trying to wait out another epic tantrum over something ridiculous. Caregiving is a challenge that I have undertaken because I want to do the best I can for my mother. And left in the hands of others...yeah I just need to be there.

Yes, I could use a spa day, but I will settle for Happy Hour, a movie, or maybe some more readers. In the meantime, I leave you with everyone's favorite scream meme: