It's complicated when a famous person dies and your opinion about that person varies depending on the specific issue raised when addressing that person's life. 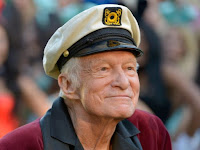 Way back in the day, I wrote about Hugh Hefner for one of my original Fried Chicken pieces. The funny thing about re-reading that piece is that I was still double-spacing between sentences. The sad thing about re-reading that piece is realizing how spot on it was if I had been writing all of this in tribute to him right now. So I will not re-write anything from the past. I will instead assess Hefner for what I think of him right now. And it's complicated.

It's complicated to wonder about the stories told by the various exes about life in Hef's Harem. When you read them, are we at all disgusted or do we dismiss each woman as an opportunist with no opinion at all about the Wizard behind the curtain?

It's complicated to reconcile that Hefner considered himself a feminist. For when it came to supporting women's reproductive rights and health, certainly we can applaud him for being ahead of his peers in that respect. But he was in the business of selling sex, so supporting women's empowerment through birth control and access to abortion rights is great...and even greater for men who want the freedom to fuck and avoid fatherhood (yeah, I said it).

It's complicated that Hefner was an early supporter of the Civil Rights Movement. One of his best friends was Bill Cosby, who was also an activist. Alex Haley wrote for the magazine in the 60s and his interviews with both Malcolm X and MLK were published therein. Yet, in the history of a magazine that has been published since the 50s, how many black women were playmates? (I only counted 30 names on Wikipedia.) That doesn't imply that Hefner wasn't progressive on race, but take a look at these past centerfolds and consider how Playboy reinforced certain stereotypes on black beauty.

And I get that he was just one man. He was human, so of course he was complicated. He lived a long life, through turbulent and changing times. He could have chosen to just publish smutty pictures of women, with no impulse to take a political stance on anything. He was in the entertainment business of selling men fantasies. And that made him very, very rich. And he used that money to fund a hedonist lifestyle.

Judging him now feels like a cheap shot. He's dead. He was an old man who finally found happiness after a life of searching. Or perhaps he found happiness long ago, so maybe it was love that he really wanted all of those years. So why judge him for living on his own terms when everybody else who chose to travel in his orbit knew the deal and played along? But (and this is the final but), don't airbrush his legacy like one of those Playboy pictorials either. Tell the truth, the full unvarnished complicated truth.