Technically, this is a late night snack of leftover chicken since I began writing this piece on Wednesday night...but I fell asleep and now it is Thursday, so maybe we should just call it chicken salad. However, I think you'll see why the metaphor still applies.

I didn't watch the premier episode on Tuesday night when it aired because, as you probably know, I have a two year old and I have no idea when anything airs on television in real time. Which is ironic given my recent annoyance with the idea of a TV streaming service like ROKU, but I digress. I watched the episodes tonight on demand while the Hub put the Toddlersaurus to bed.

The first five minutes were hilarious. Every issue that could be attributed to present-day life for the so-called typical working-class American family found a way to be present and accounted for: from seniors paying for their medication, to the middle aged daughter/caregiver, to the interracial active-duty military family, to the ideological divisiveness of the last election, to the gender-fluid grandchild. All of that was introduced before the first commercial break. 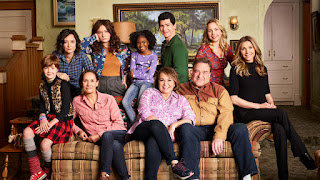 I actually expected the show to go downhill from there, but it found a way to remain funny and clever. The original Becky is scheming to become a surrogate mother for the replacement Becky. Son DJ is a veteran with a black child and a black wife who is deployed somewhere. Aunt Jackie has become the sitcom version of Cindy Sheehan, which is its own ironic twist given Roseanne's apparent road to Damascus/hell conversion from socialist to Trump supporter (in both real life and in her alter ego). Perhaps that actually makes sense in bizarro world, but let's revisit that blurred line later...

The storyline's meat and potatoes center on daughters Darlene and Becky. Darlene is back at home, presumably to care for her aging parents, but that facade quickly unravels, so we can assume that much of the drama will center on her struggles as a single mother with two very interesting children. Becky is attempting to get a fresh restart on life by passing herself off as a viable candidate for surrogacy for an affluent yuppie couple. Of course that is both funny and sad given the real-life tragic death of Glenn Quinn, the actor who portrayed her husband Mark on the original show, which will be addressed later in the series run.

Assuming that everyone forgot about the last "dream" season of Roseanne, life still sucks for the Connor family. And if there was a sitcom family that could be realistically be revived after a twenty year absence then it makes perfect sense to turn to the Connors. Edith and Archie Bunker are dead, and no one would ever believe that Michael Stivic could be anything other than a typical aging hippie. If there was an interest in revisiting the Evans family (and I am shocked to learn that apparently there is), I'm not quite sure how that would work but I guess somebody with more creativity and vision can work on that one.

Anyway, the point is that if the goal of this revival was to depict or reflect the concerns of what some people believe is forgotten America, then the most obvious family to do that convincingly is the same sitcom family that assumed that role in the 80s. While there are plenty of other family sitcoms from the same era, none of those shows actually assigned themselves the task of being a reflection of an American ideal, with the most notable exception of The Cosby Show (but we can't talk about that right now).

As for the blurred lines between Roseanne and Roseanne Connor, I can't even begin to wrap my head around that ideological evolution, but now that I have seen the premier and know that it was enough of a hit that the Trumpet called her to offer congratulations...I'm good. I can put this show in the same category as most things on TV, which is I can take it or leave it. I was never was a big fan of the original show anyway. I am not a snob or an elitist, and I consider myself to be open-minded enough, but this won't be must-see for me especially when I know that I am better off making more of an effort to see Blackish or Atlanta.

And here is my final piece of cold chicken--for the record, this show makes the same erroneous assumptions about people's lives that have become so divisive and intractable in real life. We call each other names when we're angry, but when it is time to stop shouting, then we realize our common humanity and capacity for tolerance and empathy. Of course the Connors have both a black and a gender-fluid grandchild because this is America. Of course Jackie can be a retired cop and a life coach and have supported Hillary Clinton because this is America. Of course people are struggling financially, physically, and emotionally (even the yuppie couple that is willing to resort to surrogacy) because this is America. Not just working class, or inner city, or rural, or coastal, or evangelical, or agnostic--we are all American.
Posted by Ayanna Damali at 12:26 PM