I didn't intend to write an entire post about the latest public racial micro-aggression, otherwise known as being black at Starbucks, but here I am because once again, here we are as a society, confronted with our "unconscious racial biases"...

I feel compelled to explain why I won't be participating in a boycott of Starbucks. For the record, I used to go hardcore on their burnt coffee, and every now and then when I need a jolt, I will make a visit. But the rotation of my life that once found me in Starbucks on the regular has changed, so I can take them or leave them alone. And I believe the last time I intentionally went to a Starbucks was to take this picture: 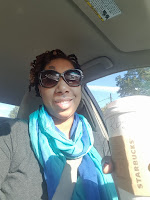 Which was part of an effort by Spelman alumnae to honor the appointment of Rosiland Brewer as Chief Operating Officer last fall (so any *news* that suggests that they found a black woman to promote in order to fix this for them is misleading). And I stand by this photo and the reason why we were so excited to take them to acknowledge her as one of the reasons why a boycott seems extreme.

So let me start there by addressing the fact that of all the places where an incident like this would occur, Starbucks is both the most obvious and yet ironic venue for a major racial micro-aggression. Starbucks is the canary in the coal mine of gentrification. Once a Starbucks opens in certain neighborhoods, that is typically a sign that demographic changes are about to happen. Yet, they hire locally, so at the same time that Aunt May is being persuaded to sell her home for more money than she's ever earned in her life, her adolescent grandchildren can get good paying jobs working at the same Starbucks that attracted the potential buyers to her neighborhood.

It is a melting pot where people go to loiter while drinking over-priced burnt coffee. I have never understood why they even bother to give the names of the varieties of coffees they serve because in the end, it all tastes the same. And because Starbucks serves both a functional walk-through as well as a de facto community gathering spot, there is always an eclectic mix of folks in there at any given time. Starbucks is Cheers, McDonald's, and the public library for every one who wants to avoid going to any of those other aforementioned places.

Without knowing much more about what prompted their arrest other than a request for the bathroom key, I think we can all agree that was no reason to call the police; however, what happened next is the reason why we might need to rethink whether a boycott of the entire company is the most appropriate response. Because the video was taken by a white patron, and on that video, the person who confronts the officers while they are making the arrest is another white patron. And while we might be all caught up in the mechanics about the biases of the employee, the manager, and the police, we need to stop to acknowledge that we know about this because of the woke white allies who intervened.

That would not have happened at Wal-Mart or Chick-fil-A, companies that black folks love but that don't demonstrate the same level of corporate support for their workers. At an Ohio Wal-Mart in 2014, a black man was shot to death after a white customer saw him walking around the store with a toy gun and called the police. This is a retailer that sells firearms. Chick-fil-A's CEO admitted to supporting organizations that oppose marriage equality. You may not care about LGBTQ rights, but companies that oppose the civil rights of one group probably were not on the front lines with our parents and grandparents (IMHO) seeking racial justice.

But a company that has at least tried to talk and walk the language of inclusion, diversity, tolerance, social justice, racial harmony, gender equality, living wages, universal healthcare, and that attracts the types of patrons who would stand up to the police in the face of what they felt was an obvious injustice might deserve benefit of the doubt. That company might deserve the opportunity to make things right, even after their CEO issued a less than satisfactory first response. Even if the employee wasn't fired or if it took them 48 hours to reassign the store manager.

Because the COO is a black woman with a grown son who could just as easily been in the same shoes as the two men who were arrested. Because it was just last month that Starbucks achieved pay equity. We can agree to disagree, but I cannot equate this incident with the protests at the Woolworth lunch counters from 50 years ago (like one of my classmates says I should). I cannot look upon Starbucks with the same wariness that I look upon the NFL, where black bodies are bruised and broken for entertainment value, but are not allowed the right to protest against police actions that result in bruised and broken black bodies under the guise of protecting and serving the public.

But I am happy to continue my boycott of Koch Industries and their products as the Koch brothers have funded efforts to support stand your ground legislation, stringent voter identification laws, and other conservative causes via ALEC (and trust that I am displeased by their alliance with UNCF). I don't need any craft supplies from Hobby Lobby, nor do I need any home improvement items from Home Depot. Each one of these companies has had issues that I find a lot more troubling. Now, I won't be going out of my way to get coffee from Starbucks, and I reserve the right to change my opinion of them if I am not satisfied with how they resolve this issue.

Besides, I can burn my own coffee at home.
Posted by Ayanna Damali at 11:45 PM