On the Monday after the annual White House Correspondents' Dinner (which I have never been in the habit of watching) I find myself procrastinating by checking out old YouTube videos of past roasts. This is because I took the time yesterday to watch the entirety of comedian Michelle Wolf's roast, and have been watching/reading a bunch of post-event lamentations and refutations and denunciations and what-not. And my suspicion is that all of this ultra-sensitivity, especially on the part of those in the so-called Liberal Media Establishment is just a little too...

I don't know what word to use yet. Is it whiny? Is it self-aggrandizing? Is it ironic? Is it hypocritical? Is it sexist? Is it just more proof that there is a very flimsy sisterhood among white women?

But let's start with my initial take: Michelle Wolf was funny at times, flat at others. She lost the audience about midway through her set but like a trooper, she kept going. And then she zinged them at the very end, knowing that she had nothing to lose at that point. So perhaps, her best joke was the very prominent middle finger she offered to the stodgy Washington press corps for their complicity in helping to enable the train wreck that is the current Administration.

So why has a good deal of the criticism been focused on three jokes that were aimed at Sarah Huckabee Sanders? Three jokes that offered the following critiques: (1) that she lies; (2) that her eye makeup is always perfect; and (3) that she looks like a character from The Handmaid's Tale. She did say some other stuff, but that was pretty much the gist and from that, we got calls for Wolf to apologize and a statement from Margaret Talev, the dinner chair disavowing her performance, accompanied by a chorus of complaints from the likes of Andrea Mitchell, Mika Brzezinski, and Maggie Haberman... 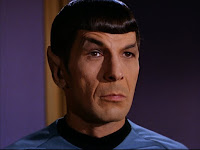 Fascinating (in my best Spock impression). And yes, my ironic choice of this Leonard Nimoy picture is meant to highlight how all of this outrage is over eye makeup.

Anyway once I started writing this, I stopped listening to the past WHCD roasts, so just to give you an idea of the standard Michelle Wolf is alleged to have sullied, judge for yourself: Stephen Colbert in 2006; Wanda Sykes in 2009; Seth Meyers in 2011; Jimmy Kimmel in 2012; Cecily Strong and Larry Wilmore in 2016; and Hassan Minhaj in 2017. I'm not even suggesting that you blow off half a day to listen to all of these, as this is just a sampling of what is available in YouTube. I am simply suggesting that there might be some really offensive jokes embedded in one or all of those videos, and one thing I do not recall is a call for an apology or any mea culpas being released.

The point of inviting a comedian to the DC Journalist Prom is to get a few laughs, which is the same reason why comedians get hired to host the Oscars and the Emmys. Anyone who preferred to be covering serious news should have been in Michigan with the President.

Exactly. While Michelle Wolf managed to poke fun of Rachel Maddow, Kellyanne Conway, Reince Preibus, Hillary Clinton, CNN, This is Us, and the Democrats, she avoided making a Bill Cosby rape joke, which probably would have generated much less offense. Meanwhile, the President was hosting a rally in MICHIGAN, never mentioned the ongoing crisis with Flint's water, but y'all mad because Michelle Wolf dissed Sarah Huckabee Sanders' flawless makeup techniques.

But Michelle Wolf did mention Flint, Michigan. She also mentioned the arrests at Starbucks and how they plan to solve racism in an afternoon. And maybe half of whatever else she said wasn't all that funny, but that really wasn't the point of the outrage, was it? Aunt Sarah's makeup is always going to be on point.

Posted by Ayanna Damali at 6:22 PM