Till Death Us Do Part

Let's talk about Dan Gasby and B. Smith and his girlfriend. Not in a gossipy way (because that ain't none of our business), but in a real talk way. Like in a who-do-we-think-we-are, weighing in on this family's life with Alzheimer's disease? 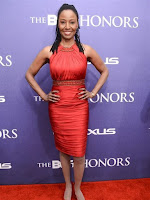 I became a fan of B. Smith's after I read about her in Essence magazine, and by the late 90s when I was out of law school, I emulated her as I tried to refine a side hustle as an event planner. Sure, there was Martha Stewart who had cookbooks, a magazine, and her own TV show, but B. Smith was a Black woman managing events like Black woman do. And B. Smith had been a supermodel. And B. Smith owned the restaurant that occupied prime real estate in a tony corner of Union Station. A true Busy Black Woman.

My mother has B. Smith's first cookbook, and it is actually sitting above my head on the shelf in her kitchen where I am writing this. My mother, who is in another room, has Alzheimer's and so does B. Smith. In this particular moment, it is one of those sad ironies of life--women that I idolize, stricken by the same fucking illness in the prime of their lives.

So when Smith appeared on the Today Show with her husband Dan Gasby to share the grim news, I was heartbroken. When B went missing from Sag Harbor, but was found in New York City, it reminded me of that hellacious night my Mom walked from a Georgetown restaurant to a dormitory at Howard University. When I saw B's short gray fro in a recent photo, it recalled the conversation I had with my mother's friend when she suggested shearing off Mom's hair as an alternative to paying to get it done every few weeks at the salon. When Dan and B released a book on this phase of their lives, it made me fantasize about that day when somebody might stumble upon my musings.

I have been understanding. Sympathetic. Protective even. Because while I cannot relate (and as far as I know, neither can my Daddy), I think folks are jumping to all the wrong conclusions about what is happening in their marriage. This will not be a loud defense of Dan Gasby, who is fully capable of speaking for himself (and he's got a much larger platform than mine for doing so). In fact, here is a recent Washington Post article that allows him just that privilege, as well as his podcast, so really there isn't much more I can add to what he has already said. Except, y'all need to leave the man alone.

Recently, someone well-known posted her opinion about Gasby and his girlfriend, to which a lot of her followers offered their sentiments ranging from calling him trash to demanding that he just pack it up with his white woman to leave B her dignity. One brave sister pushed back, and I chimed in with my two cents of agreement. There was more commentary on both sides after that, but one post in particular challenged our assessment of the situation, including the off-handed assumption that everyone who has lived long enough has dealt with Alzheimer's at some point. And that's what hit my raw nerve.

Her assumption is dead wrong. Because until my mother was diagnosed with this fucking disease, I thought I had lived long enough to understand a lot of things. But I hadn't because living with Alzheimer's is not someone telling me about how an Aunt or a grandparent had it. Living with this fucking disease is the perspective offered by a caregiver who can talk about how it completely upends every aspect of his/her life while watching it wreak havoc on and kill their loved one. And once you can relate to that sad reality, then you already know not to judge Dan Gasby.

From my perspective as a daughter, taking care of a parent or grandparent is not the same as caring for a spouse. At some point it was my expectation to care for one or both of my parents because that is the natural order of things. And while it is both sexist and presumptuous to say aloud, that responsibility falls to me as both the eldest child and as the only daughter. What I did not expect was to assume such a daunting undertaking before I reached 40, at a moment when I was trying to figure out my own life.

Alternatively, my Dad never expected to become a caregiver again (after he and my Mom took care of his parents thirty years ago). He has said this many times throughout the course of my Mom's journey. His assumption was that they would grow older, and that if he got sick, she would care for him. It never occurred to him that anything could happen to her, so when it became undeniable and inescapable that the roles would be reversed... Thus looking at how my Dad struggles and manages to get by, I am keenly aware of what Dan Gasby (and his daughter Dana) might be experiencing.

Now sympathy for the man is not the same as assenting to his choices, so let me say a word about how as recent as last week, I thought that Gasby should show more discretion. He is exposing both his wife and his girlfriend to unnecessary scrutiny. However, I've had a change of heart. This fucking disease forces people to live with a lot of guilt and undeserved shame. Caregivers feel guilty about almost every choice and project shame as the outcome from having to make those decisions. And in the long term, neither one of those emotions resolve anything (ask me how I know, better yet, wait for the book).

The most outspoken critics of his choices have been women, because caregiving is typically our domain. We can applaud the man for caring for his wife as long as he denies himself in the process, but once he admits that he has needs and publicly attends to them, we call him trash. And we justify our emotions by telling a faithful Big Mama story, because she was selfless and never complained and did everything without anyone's help and that is exactly why none of us has a damn clue what she went through and how she felt about it!

In his own way, Dan Gasby is fulfilling his vows by taking care of his wife in their home with their money (they were partners in building that empire). We are not privy or entitled to opine about the internal workings of a relationship that no longer exists. We should be outraged that fucking Alzheimer's stole B. Smith from Dan Gasby and will claim millions more as Baby Boomers live longer and get older. His girlfriend is not the affront to B. Smith's legacy, fucking Alzheimer's disease is. 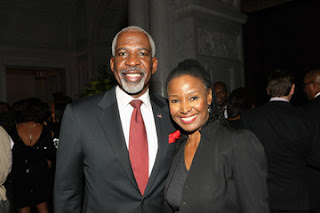 Posted by Ayanna Damali at 7:29 PM