I should know this date on general principle, and I should be ashamed that I was caught unprepared, but January 29 is a BBW National Holiday. The Oprah, our High Priestess/Fairy Godmother/BFF4L celebrates a milestone birthday and in honor of this auspicious occasion, I decided to provide a top ten list of favorite Oprah moments on the Facebook page. Then as an impulse, I decided to share this list here on the blog, just in time for a revival of our favorite midweek indulgence of fried chicken. In keeping with that theme, here are ten momentous events of her career--boneless chicken fingers served with a special sauce that only the Oprah can serve.

1. You Get a Car!
Now that the federal government shutdown has been temporarily suspended...I decided to announce the details of my upcoming Busy Black Woman Gift Away (coming in February), so it seemed fitting to highlight this Oprah moment. Because this was Oprah at her Oprest--when she gave every member of her audience a car, for no reason other than their mere presence in the studio that day, and the fact that she was the Oprah: 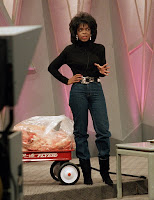 Oprah's fluctuating weight was one of those constant topics that was integral to the success of her show. It made her seem like an every woman--someone who despite the appearance of success, had regular struggles. It was inconceivable that a public figure could gain weight without it having a negative impact on their career, except Oprah. It only seemed to endear her to her audience. So when she wheeled out that wagon of fat in her Calvin Klein jeans, it was a moment. Then when she gained it all back, we could all relate. Unfortunately, it became the fodder used against her by her detractors, like this skit on In Living Color (for which Kim Wayans later apologized). Her weight issues also contributed to the narrative that she was a modern-day Mammy figure.

While I don't have the capacity to unpack that historical baggage or to confront the sexism implicit in the ridicule Oprah has faced over her weight, let me just return to my initial point. Weight loss and self-esteem are ongoing struggles for most women, which makes her human.

3. The Legends Ball
I am eagerly awaiting the day when Oprah announces a Regular People Ball, but I guess that was the entire point of her talk show. Since I missed that, maybe I will get blessed with a chance to Live My Best Life one of these days, or better yet, maybe I'll get invited to her next Legends Ball instead.

4. Oprah adopts a Village of African Girls
In fact, Oprah did not adopt a village, but she did open a school in South Africa. But honestly, what's the difference?

5. Oprah adopts a College of African American Men
Again, Oprah did not adopt the entire student body, but Morehouse College has been the beneficiary of her philanthropy for 30 years. Here is the tribute the 415 scholars organized in her honor during the final season of her talk show (and I happen to know a couple of those brothers, so this makes me ugly cry too). #Payitforward #HBCUJustGive

6. Auntie Oprah at the Royal Wedding
Meghan Markle may have only had her mother, Doria Ragland, to represent her American family, but Auntie Oprah was there, so it all worked out.

7. Oprah's Theme Song
Depending on how old you were when the Oprah Winfrey Show aired, this was the Oprah music that you came home to. Later there was the saxophone version of I'm Every Woman, a Paul Simon 10th anniversary version, and then the Patti LaBelle version which were all perfectly fine. But then she got it in her head to sing her own song (with a video too)! My DC peeps should recognize this version, a cover by go-go royalty Rare Essence (you hit the big time whenever there is a go-go cover of your song.)

8. Beloved
If no one did it better than the Oprah, no one did it worst than her either. During the initial era of her book club, Oprah often introduced audiences to authors that were not in the mainstream, including such names as Pearl Cleage, Wally Lamb, Barbara Kingsolver, and James Frey. (And in a moment that could stand alone as one of the most painful, here is Frey, forever remembered as the author who had to publicly apologize to the Oprah for fabricating his memoir on her show).

Author Toni Morrison was a particular Oprah favorite, even though she was not an unknown and had won every major literature prize, including the Nobel. Nevertheless, the Oprah had decided to bring Morrison's Beloved to audiences in a film in 1998. In which she would star and produce and hand-select all of the cast. Now maybe that is an exaggeration, but it is true that the movie flopped.


So I have a few confessions to make about this book and movie, beginning with the fact that I, English major in college and daughter of a self-proclaimed Toni Morrison scholar, COULD NOT FINISH THIS BOOK. I haven't even tried since my first three or four attempts. I only saw this film once, and probably will never try again. Those are not necessarily statements about the book or the movie, but perhaps about me. So Please Oprah, don't make me apologize in front of an audience for not living up to your standards.

In the alternative, we hardly know anything more about her beau, Stedman Graham, than we knew when they were engaged. So we have questions...and other than the occasional red carpet appearance or random detail that Oprah shares about their life together, we get nothing. Where Gayle has been TMI, Stedman has been MIA. This confounds me.

10. Oprah in Baltimore
I actually started this list on January 29, but I got busy doing what I do, and by midnight I was tired and hadn't actually decided on a tenth Oprah Moment. So I went to bed. This morning, as if the Oprah had herself come to me in a dream, I decided that my ultimate Oprah Moment was to be found in the era before she became The Oprah, which was her time in Baltimore. 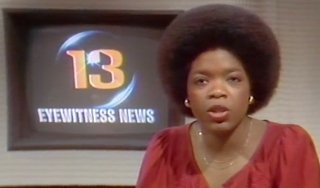 I was a kid when Oprah Winfrey was on the local news in a city just up the road. Back in those days before cable, we could get Baltimore TV stations here in DC, but other than to see a repeat of a program that we may have missed, I don't actually know why we would have watched their local news. But we did, and in my memory, Oprah was the morning weather lady who later got a gig on a locally produced show called People Are Talking. Then at some point, she left for Chicago and the rest is history.

I have since learned that my memories were slightly off with respect to Oprah being the weather anchor. She was the cut-in reporter during the mornings, which is the person who provides local news updates during breaks from Today Show and Good Morning America. I was right about the talk show although I did not remember that she had a co-anchor. I feel as if we watched it because it was a Black woman on the air back in an era when that was a big deal. In DC, that person was Carol Randolph, who also had her own local talk show. (But in another instance of relying on my childhood memories, Randolph's show was cancelled and replaced by, wait for it--the original syndicated Oprah Winfrey Show!)

And that, Busy Black Folks is a wrap on this list, but I have one more Oprah Moment to share and it comes from the archives of this very blog. The year was 2011 and the Oprah Winfrey Show was winding down its 25th and final season. That was also the first year that I began writing this blog. In particular, there was this piece I wrote the week her show was about to end, which was the same week that my domain name went live. And then there was the recap of the final Oprah sermon which I forgot about...

Before I ramble on too much longer down this memory lane of past writings, (because surprise, I already did a version of this list back in 2011) the great thing about revisiting those old pieces and all of these Oprah Moments is the fact that I am still learning, evolving, and building this Busy Black Woman empire. To think that I almost gave up a few years ago, but here I am. And maybe there you are reading this in anticipation of what is next.
Posted by Ayanna Damali at 1:57 PM