Not Ready for Reruns

So this is one of those pieces that has been percolating for months, bouncing back and forth between the two blogs, ever since The Cosby Show ("Cosby") quietly returned from syndication purgatory last fall. And this is my umpteenth attempt at writing it, which now seems timely given the events of the past week. But here goes:

I was not eager for Cosby to return to the airwaves, even though it was is a beloved sitcom with many memorable episodes and characters. I missed the show, but only to the extent that one misses a show that could be on TV but isn't. Like What's Happening, which makes periodic returns every few years for about three months then disappears again. And when it returns, I act like I really missed watching it until about the second rotation of reruns and then I remember why it's OK for it to go away again (because those episodes from the last season really sucked).

Well, except Cosby wasn't that bad...although there were plenty of corny episodes that we prefer not to remember, like any episode that featured Sandra and Elvin (except maybe the one when Cliff prefers the guy that comes back several seasons later as Denise's husband or the one when Claire reads Elvin for implying that she was too good to serve her man). 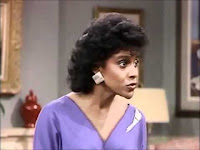 And that's the thing about Cosby...we know all of the episodes, just like we know all of the episodes to Good Times, which is the only other black family sitcom with memorable episodes. (Nobody, and I mean NOBODY remembers a single specific episode of Family Matters, The Parenthood, Moesha, or Sister, Sister.) How many of us remembers much from family sitcoms anyway? Quick, in ten seconds, tell me the name of those later in life kids from the final seasons of Family Ties, Fresh Prince of Bel-Air, or Growing Pains. I think we can all admit to watching the Olsen sisters on Full House and forgetting that they were portraying one character and not a set of twins. And if you can name five episodes of The Brady Bunch not including the scene when Jan cries "Marsha, Marsha, Marsha" then you get a gold star.

But back to The Cosby Show and my reticence at its return. After several instances of just happening upon the show or just trying to kill time between kiddie programs on PBS, I just can't watch it anymore. This is despite my fond memories. I know that Bill Cosby is just an actor and that Heathcliff Huxtable is just a character and that those aren't really his kids, but still. The show was an integral aspect of my life every Thursday from 1984 to 1992. In that time frame, I went from elementary school to college. For goodness sakes, I was attracted to Spelman partly because of A Different World (where the exterior shots for the fictional Hillman College were taken), so umm yeah, the Cosby influence was a big deal.

Thus, not watching the show on purpose is hard. Apparently by some cosmic coincidence, BET and TVOne both began airing the show just as the sexual assault case went to trial. Bounce TV had been airing the show since last fall when I first contemplated analyzing the magnitude of its return (and right around the time when one of his assault cases was being dismissed). So at any given moment, every black cable network is defiantly ignoring these multiple rape allegations and probably tainting future jury pools should his case be retried.

It is hard for me to dismiss Bill Cosby's legacy, so I won't. It was hard for me to conceive of him committing those vile acts. And I suspect that the jurors on that case had just as hard a time separating, compartmentalizing, and ultimately reconciling the divergent personas of Brother Bill the philanthropist, Mr. Pudding Pop the comedian, Dr. Huxtable America's favorite TV Dad, and that shadowy, creepy dude who put drugs in women's drinks and molested them.

Before anyone accuses me of bashing Mr. Cosby without proof, let me point out that every case of sexual assault relies on our ability or willingness to believe either the accused or the accuser. There are rarely any witnesses, and even when there are, it isn't a guarantee that we accept the word of one over the other. So telling me that I was not there isn't much of an argument in his favor. And telling me of his good works doesn't diminish the fact that there are at least 50 women who claim that he took advantage of them. He claims that those encounters were consensual, but a woman who is intoxicated, inebriated, or otherwise under the influence cannot give her consent to sex. Period.

For the record, back in 2006 I defended Mr. Cosby after he had been the commencement speaker at Spelman and stirred up some long forgotten controversy with his remarks. I grieved like I had lost my own brother when his son was killed. His wife is my soror. When the Autumn Jackson soap opera bubbled up, I accepted that he was a serial philanderer and that he and Camille had some Clintonian agreement concerning the boundaries of their relationship decades ago. Then the dike burst with so many accusers recounting the same twisted story. It makes you wonder if the Ivory soap-clean comedy routines, charitable generosity, and public moralizing were primarily for deflecting attention from his lewd private behavior.

I take no comfort in the mistrial or in his very public fall from grace and there is no resolution that will be satisfactory for anyone involved or even remotely affiliated with Bill Cosby. I winced as my Spelman sister Keisha Knight Pulliam appeared on the Today Show to justify her presence at the side of her TV Dad on the first day of his trial, and I wondered where his real family was...and have noted how cautious (or silent) nearly every other actor who worked with Mr. Cosby has been when making public statements. Except for Joseph C. Philips (the guy who portrayed Sandra's date/Denise's husband), but even his commentary wedges a rock in a very hard place.

We watch old TV shows because they are familiar, entertaining, and nostalgic. There are easily 50 Cosby episodes that could be identified as fan favorites; at the same time, there are at least 50 women who have come forward. Pause on that irony for a moment and then perhaps you might understand why it is impossible for me to separate my revulsion for one assemblage from my nostalgia for the other. I'm still not ready.
Posted by Ayanna Damali at 6:31 PM