Now that I have your attention, let's talk about the subject that set the Twitters all ablaze this week. Lizzo went to an L.A. Lakers game and caused quite a stir with her outfit. (She also was named TIME Magazine's Entertainer of the Year, but we'll address that later.)

Some of you didn't like it seeing her booty out, so you shared that displeasure with the world via social media. Then others of you felt the need to call out that first group for fat-shaming, which they denied, so then the rest of the day was spent thinking out load about fatness, Blackness, and loudness in public spaces... instead of the topic du jour (which is what Nancy Pelosi really had for lunch).

So let's discuss this in a civil manner: Should Lizzo have gone to the game wearing an outfit that exposed her buttocks? Should she have been more sensitive to the presence of children in attendance? Should she have brought some kind of cover-up to protect the seat from her butt sweat? Should she have performed a more tasteful adagio instead of twerking when her song came on? Should she give a flying fig about what any of us think?

Lizzo is gonna do Lizzo whether that is at a Lakers game or giving a Tiny Desk Concert at NPR or walking the red carpet carrying an expensive coin purse to hold the precise number of fux she should give about our opinions. This is the same woman who posed like this for her album cover: 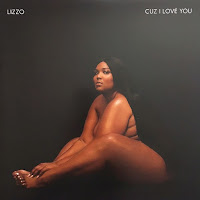 Shoot, she was over-dressed for that NPR performance, given that the only dress code for public radio is whatever the hell is clean and doesn't need much ironing (just like college) since no one but the doorman is going to remember anyway. So why would anyone expect her to wear jeans and a tee shirt to a basketball game?

There were kids present. Yes, but that's not much of a concern when the Laker Girls hit the floor, or is that NOT an ass-cheek I see peeking out from under that teeny-weeny skort?

You don't see Rihanna dressed like that at a game. No, you tend to see folks dressed like Spike Lee at these games. On the other hand, we have seen RiRi dressed in as little or less than Lizzo and nobody ever has time to blog about that... What about her bare ass on that dirty seat (or is it her dirty ass on that uncovered seat)?

Of course she was doing the most. But as I have come to suspect that Lizzo is as much performance artist as she is a performer, this stunt ranks up there with Lady Gaga's drunken panty raid at the Yankees' clubhouse back in 2010. Whenever a celebrity is going out to be seen at a public event, the point is for them to be seen. We are supposed to see them get escorted to their floor seats. We are supposed to wonder who the people are seated near them. We are supposed to notice what they are or aren't wearing. Appropriateness is not really the point.

But let's pivot to the subject of fat-shaming and how predictable it is to denounce it publicly even as we privately talk shit about people's weight, how they look in their clothes, or try to make polite excuses about our discomfort. Last month we were cheering Lizzo on for being so bold and brash and unbothered. This summer she performed on stage in prime-time at the VMAs with an inflatable ass in a thong (backed up by several dancers dressed leggings with the butt cheeks cut out). I don't know if this backlash means that the novelty has worn off, but it does suggest that we aren't quite as evolved as we claim to be about body positivity.

Thus, I will start by addressing my own hypocrisy. I have laughed at fat jokes, especially when the fat person is telling the joke and playing the clown. But it is wrong, and I cringe whenever I think back on my own casual cruelty. In the moment, however, it felt more like a reprieve from my own insecurities--for being too smart, too weird, too tall, too high yellow, too whatever made me vulnerable to ridicule. To the extent that Lizzo became our unapologetic heroine and role model of imperfection, we were here for it. Until we weren't. We're uncomfortable with Lizzo prancing around like some skinny hot chick because fat people are not supposed to feel good about themselves--we want them to make us feel good about ourselves.

So cut the crap, because Lizzo has been showing her ass all year. Listen to this interview she gave to Terry Gross (which I heard in real time when it aired) and tell me if this sounds like someone who isn't deliberately attempting to prove a point. No different than what Megan Thee Stallion or Normani have been doing this year, and I can't imagine that they would face the same level of criticism (because they wouldn't). And if you sit through the entire 8-minute response she posted on her Instagram (ignore the headline), trust she ain't crying from humiliation. She did what she did and I'm not mad at her.