Note: I began working on this piece last month when the 50th Anniversary special aired, but I got busy with a few other projects and had planned to return to it before the end of the year. Sadly, the death of puppeteer Caroll Spinney is what prompted me to finish it today. This piece will serve as an appreciation of his wonderful work as well as my nostalgic homage to the show. Enjoy.

We watched the Sesame Street 50th Anniversary special last month and I will just confess up front that at first, I was WAY more excited than the Kid. Of course, she was into it for all of the characters that she loves, but was unfazed by my random call outs and tweets at seeing favorite veteran Muppets and humans until a certain frog appeared:

The highlight of the night came when I tweeted this picture to Holly Robinson Peete and she responded! After the Kid watched the special again the following weekend, she has been a tad obsessed: watching the new season and learning the new songs; forcing us to listen to their version of kid songs in the car to and from school; and binging classic clips on YouTube. She re-enacted this memorable cartoon by going to our refrigerator to 'buy' a loaf of bread, a container of milk, and a stick of butter. (She has also been hovering over me as I try to write this because she likes to see Kermit dance.)

In case it wasn't clear by now, I LOVE Sesame Street. I grew up watching it on PBS along with The Electric Company and Mr. Roger's Neighborhood in a dedicated block of weekday morning programming. Even after I outgrew the show, I found reasons to watch it until I went away to college. If you wanted to ruin my day, preempt any one of those shows for a pledge drive. Another way was to be at someone's house with a poor UHF signal or whose parents weren't into public television.

There is so much to say about this beloved show, so many wonderful memories to share, and then there is the bittersweet realization that with the show reaching its 50th season, many of the people who helped to bring the magic all of these years are passing on. The most painful indicator of this fact came with the death of Caroll Spinney, the puppeteer who brought Big Bird and Oscar the Grouch to life. 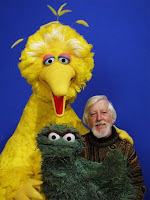 When I received that news, my heart sank...then it burst. My initial reaction was sadness because we had just seen Spinney in the Celebration special. I know that he had retired but it was not clear until I saw him in a wheelchair, just how physically demanding it had been for him to portray Big Bird for all of these years. (Please, take the time to watch this fascinating documentary about his career and keep the tissues handy.) He had developed a condition called dystonia which I can only imagine was exacerbated by the decades he spent in that costume. However, my sadness melted away when I reflected on the fact that his life's joy had been this work, so on the same day that the show was honored by the Kennedy Center, it was fitting that he slipped away to where the air is sweet.

The Hub and I have differing opinions about the value of nostalgia. He isn't all that contemplative about the past while I am clearly game to revisit memories of my youth whenever the spirit hits. I had been waiting all year for some kind of spectacular salute to the show that literally has touched millions of children around the globe. I expected more than an hour of blink-and-you-missed-it cameos and walk-ons. I wanted to see the now-grown children who actually appeared on the show (no offense to Joseph-Gordon Levitt, but I checked his IMDb). I wanted an In Memorium segment like the award shows. I would have even settled for an imaginative behind-the-Muppets spoof (it would have been great to reveal some of the 'real' personalities of certain lesser characters like the angry blue restaurant patron).

I wanted more, but that has been my lament since the show moved to HBO. I love the old Sesame Street; I appreciate aspects of its current incarnation. While the move to HBO makes fiscal sense, it has resulted in a dialing back on the educational content in favor of more entertainment. Sure, kids still can get the basics, but there was a lot more substance to the show when it was an hour long. I get that there is a lot more competition in children's programming and a limited window of time to make lasting impressions on young viewers, but I'm not sure that it has been wise to rely more on non-human characters to illustrate very human problems and situations.

Take death, for example. I was a kid when Will Lee, the actor who portrayed Mr. Hooper, died. I had a vague understanding of what death meant at the time, but it was definitely much clearer when the show took the time to explain it. Ironically, it was this unforgettable segment with Big Bird engaged in a discussion with the humans who calmly and deliberately take the time to explain the concept to him. It is hard to look at that clip and not get a little dust in the eye, especially in light of Spinney's death. The actors who portrayed David (Northern Calloway) and Olivia (Alaina Reed) are also deceased, and all of the other now-older humans apparently moved off the street (presumably into a retirement home somewhere up-state).

And I guess that's why the Hub will shrug if when he reads this because change is inevitable. The Kid loves Sesame Street exactly as it is. She has no idea that there once was a time when there was only one female Muppet that was not a fairy named Abby or when everyone thought Snuffleupagus was imaginary. It is possible that her sensitivity to other children was made possible by Julia, the Muppet depicted with autism. In her world, no one debates the living arrangements or the sexual orientation of Bert and Ernie. She probably won't even notice that Big Bird sounds different.

No, it's not her Busy Black Mama's Sesame Street, but that is a good thing. This is her childhood, and hopefully she will be able to share her love for this show with her children some day. In order to remain relevant, the show has had to evolve to appeal to its core audience. Just like the retired cast of humans, some of those old Muppets like Herry Monster, Sherlock Hemlock, and Roosevelt Franklin moved into the Furchester Estates (storage) to make way for Rudy, Gonger, and Segi. As much as we love the typewriter guy and the pinball machine 2-D animated segments, we can't expect for kids born in this century to understand those references. If they get lost, they know how to use GPS. Yet, the very technology that necessitated changes to the format and pacing of the show are what keep it alive and appealing to both of us--so thank you HBO, YouTube, streaming on demand, and digital music downloads.

And thanks again to Caroll Spinney. It will be emotional for me to watch the new season knowing that my Big Bird is gone. But it is heartening to know that to my daughter, who happens to prefer Oscar, his beloved characters will live on.
Posted by Ayanna Damali at 6:39 AM