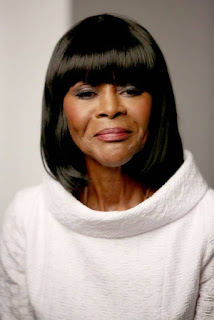 There is never enough time to process or comprehend what it means to lose an icon in those initial moments of notification. So I'm not sure that I will be able to string together the perfect combination of words to express what it feels to learn that Cicely Tyson passed away. So I think I will use just one word: Grateful.

I received a text from Ol' Hobbs and because I was driving (and reading it at the red light), my immediate reaction was to recall that Tyson was supposed to participate in a virtual book chat with a local indie bookstore that evening about her recently released memoir, Just As I Am. And then to curse the fact that I had forgotten to register for the event, and then to curse the errands that had caused me forget, but then to wonder if the participants were told on Zoom that she wouldn't be able to make it (I learned later that the event was pre-recorded). Or at least that is as much as my mind could process in the interval between reading his text and the light changing. At the next light I responded with a rather irreverent nod to the fact that she lived long enough to see a certain orange stain removed from our lives...

And then it dawned on me that perhaps it wasn't a mere coincidence that Hank Aaron, Cloris Leachman, and Cicely Tyson would all transition within days of each other--all from natural causes in a phenomenal last curtain call kind of way amid our superstitions that celebrity deaths occur in threes...(but then there was also Larry King, so not exactly in threes), but still, definitely in a pattern of sorts. In the circle of life, elders become ancestors to make way for future generations.

So we are grateful that we were blessed with her presence for more years that we realized (because I had no idea how old Tyson really was until it was revealed that she was 90 a few years ago). And like every women of a certain age, we all looked in the mirror and sent up a silent prayer to look that good at whatever age the good Lord blesses us with, because Mother!

And yes, we began to call her Mother once we knew better than to settle on something as pedestrian as Ms. As much as folks like to throw around Queen, that didn't feel quite right either, although not because she didn't earn it. I called her Mother because the body of her work had never been about people who were of royal birth. Whenever Tyson was on screen or on stage, she represented all of our Mothers, Grannies, and Aunties--women who worked hard, loved hard, and in her words, did their best.

Her best was to master her craft. Her best was to articulate our humanity at a time when Black stories were finally being told. Mother Tyson was our fearless Harriet Tubman, our courageous Coretta Scott King, our humble and dignified Rebecca Morgan in Sounder, our straight woman Ms. Perry in Bustin' Loose, our defiant Jane Pittman, and finally, our determined Carrie Watts in Trip to Bountiful. Even when she was not the star, she transformed the insubstantial into unforgettable. The first role I remember seeing her in was as Binta, Kunta Kinte's mother in Roots. That was 44 years ago, and she must have been on screen for all of ten minutes. In her later years, she appeared in several Tyler Perry movies, and again, even if for a brief flash of brilliance in a mediocre melodrama, Mother Tyson was always outstanding.

Grateful. That she kept working because there were stories to tell. She had a tireless work ethic. She upheld a standard. She was a survivor. She was humble. And those were the qualities that became the accolades that she received belatedly because Hollywood rarely acknowledges the contributions of its working class until the end. In the 45 years between her nomination for Best Actress and finally receiving the Lifetime Achievement Oscar as a consolation prize, Mother Tyson never chided the Academy for the snub. Instead, she thanked them for correcting that oversight...

Grateful that while tributes and remembrances are finally forthcoming from the mainstream press, she knew to tell her own story in her own words. Grateful that she had plans and didn't even see Death waiting in the wings for her, so absorbed she was in the work. Grateful.

Grateful that one of her most memorable performances wasn't even a scripted role, it was the dramatic recitation she gave at the homegoing for Aretha Franklin a few years ago. We were all so absorbed in that hat... 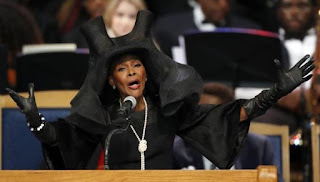 Do yourself a favor and pay close attention to Mother Tyson, small in stature and slight in voice, and witness how she commands that space behind the lectern. Watch and listen to her transformation from elegant mother-of-the-church to the back-row gossip, all without a costume change or props to set the scene. Then close your eyes to see it more clearly.

Although we joke about wrapping our elders in bubble wrap, it is because we recognize both the fragile and time-limited nature of life. This pandemic has numbed us to death, but not to the sense of loss. So many lives have been lost, yet I don't know if I would characterize Cicely Tyson's final bow with any regrets for not having packed her away to be protected from what was surely thunderous applause in Heaven.

Posted by Ayanna Damali at 3:01 PM