When it dawned on me that 2021 would be another big year of music milestones, I had plans...but as you probably know by now, I am easily distracted. And my good intentions to pull together several significant playlists for the Facebook page went the way of that well-worn road to hell because there was an insurrection in my city (and I needed to do something in response). But then the big day of transition came, and now that my blood pressure is starting to go back to normal and there is indeed light at the end of this very long and dark tunnel, I can turn my attention to the really important work of reviving my #PlaylistProject.

And the first artist to receive the comprehensive playlist treatment this year is none other than Mary Jane Blige (born January 11, 1971), the Queen of Hip Hop Soul or of Hip Hop/R&B or maybe both depending on who is issuing the decree. But more important than what specific title she holds, it is necessary and proper to highlight and pay homage because this is Queen Mary's Golden Year!

As is the case for several of the artists whose work I can induct to that that Soundtrack of My Life category, these next couple of years mark that crucial milestone for those of us born in the early 70s, God willing. We survived turning 40 without too many visible bruises, but 50 becomes the point of no return--it is that more than halfway point where we stop and marvel at how long we've been lucky to live and pray that we'll get at least half as much time to keep on living. We look in the mirror and see our younger selves, but through eyes that are framed by wrinkles and magnifying lenses. We see those disrespectful gray hairs that differ in texture from the rest, so they stand out in defiance of whatever hair products we're trying out this week. We take medicines and try new regimens to control conditions that we used to roll our eyes about, because now we must manage them or confront mortality.

Approaching 50 means we become the age now that our parents were when we first heard Mary and declared her our Queen. Ironically, that is the same age that some of your kids are now (I was 19). Blige's debut album, What's the 411?, was released the summer of 1992 between my sophomore and junior year of college. If memory serves, EVERYBODY on campus had that album in some form. My friend JAW, who was the trendsetter in our little clique had it on CD, which was the new way of playing music back then. Compact discs meant uninterrupted continuous play with the ability to skip and choose songs without having to rewind or fast forward or turn over a cassette tape. And because JAW was that friend who would play the same set of CDs everyday, What's the 411? grew on me, in spite of my initial lukewarm reaction to it. (Silly me, I preferred CeCe Penniston because hers was a club music/dance album, but the trend had begun to shift away from up-tempo, feel good party music to the slowed down, bass heavier tracks that were Mary's signature.)

Looking back, it makes sense that Mary ascended to that exalted place in the pantheon of artists whose music gets that unique Soundtrack of My Life designation. Unlike the other prominent artists from that era (all late-born Boomers), Mary is a Generation Xer whose life closely tracks the peaks and valleys of our journey from young adulthood into middle age. All of Mary's songs are autobiographical, whether she is singing about searching for a Real Love or swearing that she's Not Gon' Cry over some trifling dude she should have never hooked up with. Perhaps with each new love she falls 25/8 into him, because like so many of us Mary loves hard, so if she's singing Be Without You we turn it up and listen without judgment.

Because she is also that cool ass friend who brings the party with her, so it is always a Family Affair.  She is the fashionista of the group--we watch her videos and Reminisce about our 90s French roll hairstyles, the Mac makeup, and the combat boots. We hear You Remind Me and think back to watching the Arsenio Hall Show, Showtime at the Apollo, In Living Color, and special guest performances on New York Undercover.

There had been hip hop collaborations before Mary and Method Man teamed up on You're All I Need in 1995, but theirs is the one that stands out. All That I Can Say sounds every bit like the kind of great music Lauren Hill was writing and producing in her 1999 prime (inspired by Stevie Wonder), which is why that song works as an unforgettable duet in this live performance. We know that One was a major hit for U2 in 1991, but when they teamed up with Mary and re-released it in 2005, it became something altogether different. Sam Smith's song Stay With Me was good as a solo effort, but we first took notice of it as a duet because of Mary.

She entices us with innovative samples on such tracks as You Bring Me Joy built around Barry White's It's Ecstasy When You Lay Down Next To Me. I'm not sure anyone else could have pulled off a song based on Cotton's Dream (Nadia's Theme), better known as the theme song from the soap opera The Young and The Restless and then name it No More Drama...but somehow Mary did. She didn't just remake You Are Everything by the Stylistics, she rebuilds a more modern classic with her version of Everything. But then to keep things interesting, she does a straight remake of Rose Royce's classic slow jam from the Car Wash soundtrack, I'm Going Down, and makes it her own.

Like her predecessor, the late incomparable Queen of Soul Aretha Franklin, Mary J. Blige was crowned a monarch early in her career, and it has proven to be a sage pronouncement. Queens have to work, and Mary has been putting in the work in the studio, on stage, and on the screen. She has earned every award, every honorific, and every laurel that we have bestowed upon her, with more to come. Simultaneously regal and real, Mary is a survivor, a genuine sister-girl who hasn't held anything back: not her insecurities and vulnerabilities in Take Me As I Am; not her yearning for love as heard on I Can Love You; not her ride or die devotion on Don't Mind; and not even her public heartbreak on U+Me.

So in this Golden Year of life as she embarks on new business ventures, more acting, and hopefully releases some new music, we salute our Queen Mary. She's doing Just Fine. 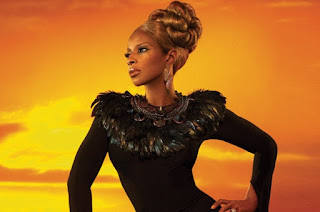