Coming Back to America

So where do I start: I've watched Coming 2 America and just in time for Women's History Month, I get to review an Eddie Murphy movie for its inadvertent attempt at a...feminist message??? Yes, that's what I wrote, and in my intentional attempt not to spoil it anymore than Black Twitter already has, there were a lot of takeaways from this film, beginning with the realization that a lot has changed in 30+ years. And a good deal of that is reflected in this sequel, the result of which is not necessarily the movie we thought it might be, but then again what should we have expected thirty years later? We should have learned our lesson after what happened with The Best Man Holiday. However, Black actors need the work, and that pile of dirty laundry won't sort, wash, or fold itself. This will definitely get you through two loads.

I haven't had a chance to read all of the ancillary articles that have been written about who didn't return to Zamunda and why, but I have my list of folks whom I felt should have at least been offered a cameo. Let's start with Lisa's sister Patrice, played by Allison Dean in the original movie. Somehow, I feel as if a very humorous side story could have been built around her presence, at the very least, she should have been running the Queens location of McDowell's. And what about the landlord, portrayed by Frankie Faison? Because if y'all went and scraped the barrel to find the rapping twins from the nightclub and somehow justified keeping the barber shop quartet alive all of these years...

Yeah, there were a lot of random cameos. And I will just leave it at that.

This entire effort was random. Because the plot is thin and clearly influenced by The Lion King. And Princess and the Frog. With nods to Black Panther, Cinderella (with Brandy), Star Wars, and The Princess Diaries. So I will just come out and say that this was a Disney movie with curse words, or one of those awkward SNL skits that lasts way too long so by the time the joke lands, you're just watching to see if it is funny.

So let me get to the women's empowerment message, which is an acknowledgement that Eddie Murphy has really grown up (somewhat though, because he still loves fart jokes.) The gratuitous sexism from the original film is toned down, somewhat. Although the plot centers on the discovery of a male heir to the throne of Zamunda, it never makes sense that he would or could ascend to the throne over his native-born sisters. Consistent from the original is the notion that women can think and choose for themselves; and if you missed that message, watch the movie again. The most poignant moment in this film comes when the late Queen Aoleon (the great Madge Sinclair) is recalled as the most sensible member of the Joffer royal family. Her voice of reason is certainly missed, but as this is a classic Disney film set up, her spirit hovers over the choices that are made, and we get another fairy tale ending.

That Coming 2 America is so self-aware as to mock itself is genius, clearly a nod to Shrek, which was the series of unabashed anti-Disney animated films Murphy starred in during the early 2000s. That was very effective as a comedic device, as was the importation of several of the most memorable jokes and gags from the original. However, part of the overall joke from our first visit to Zamunda was the fact that almost no one had heard of it (which worked in a pre-Google world). But now that we have been there and to Wakanda, I think we need to devise better ways of showcasing Africa other than these highly stylized, fictional MET Gala utopias. And in my opinion, someone should have reconsidered making light of geo-political atrocities (warlords and kidnappings) because Boko Haram isn't funny.

The Hub says I am just hyper-sensitive because most viewers are unaware of global affairs. I haven't thoroughly checked woke Black Twitter, but if he is right, then that's one of several metajokes that might catch on after the second or third viewing. There are others, including the perpetual Trading Places references, the product placement spoofs, and the fact that Murphy's evolution is due to his becoming a proud #GirlDad. Yet, despite giving the women more substance this time around, this is still Eddie Murphy at his Murphyest, just older and wiser. 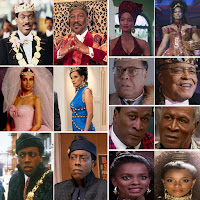 So the moral of this story is not to wait 30 years to revisit happily ever after and expect things to be as funny as they were the first time. It will be an entirely new story, and while it will try to be as funny as possible, it has to stand on its own. And if you missed that message the first time, then watch it again. I'm sure you have more laundry.

Posted by Ayanna Damali at 7:48 AM