This week, I donated to the University of Maryland, where I once worked, but never attended. I did so at the request of a relative and also in memory of my friend who earned her PhD there. As soon as I hit send, I came here to write through a few thoughts about that gift and my ongoing mission on HBCU alumni giving. Then I realized how long it had been since my last #HBCUJustGive soapbox speech, so here goes: 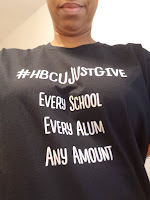 Today is a good day to give to an HBCU. I don't care which one and it doesn't matter how much. This isn't about shaming anyone who can't give that much, nor is it about making anyone feel guilty if they have never donated. But it is about appealing to you to step up on behalf of YOUR alma mater (or for the school where some person in your orbit attended, because if you know any middle-class Black people, someone most certainly attended an HBCU). And on the off chance there is no one you can think of who did, then today is a good day to support the United Negro College Fund and/or the Thurgood Marshall College Fund. This is my basic, no frills message: Every School, Every Alum, in Any Amount.

Since this a topic that I have written about ad nauseum, there really isn't much to add. Or so I thought until recently...

1. Who supports our institutions and why? This is a question that I've debated with various people on social media, and typically I come away from those exchanges wondering how any of our schools ever survived as long as they did. And then I remember--we barely survive, even with the periodic generosity of white philanthropists or the steady government-cheese support we get from our respective states. We get by, and that is applicable to all of the schools. So the first question every alum should ask is whether we are satisfied with that reality.

Consider the state-supported schools and how they fare in relation to what are regarded as the flagship institutions. As I mentioned, I gave to the University of Maryland at College Park as a favor to a relative, but perhaps I should have directed my meager coins to the Eastern Shore campus or to one of the other HBCUs in the system that historically receive less taxpayer support. Because College Park has a state-of-the-art sports arena with a Fortune 500 name attached; meanwhile, Morgan State gets support from the pay-as-you-go cell phone company...

Maybe that doesn't bother you because that cellular company is actually a subsidiary of a Fortune 500 company that has its name on two sports arenas in Texas. And that subsidiary has naming rights for the HBCU Celebration Bowl game, which is definitely a strong show of support seeing as how HBCUs never get to play in any of the other big college bowl championships. The essence of the struggle we face is that if our schools are dependent on the generosity of others, then we will get the watered down rail drinks while the alumni from the flagship schools get served from the top shelf.

You might be tempted to remind me that philanthropist Mackenzie Scott just blessed several schools with multi-million dollar donations. She and other new money corporate scions have responded to the Black Lives Matter protests with high profile gifts, for which we are eternally grateful. But so did Calvin E. Tyler and his family, but to much less publicized fanfare. Last year, one of my Morehouse brothers just dropped his own surprise blessing on his alma mater, but it didn't get the full court press that Robert F. Smith received months earlier.

Again, this isn't a complaint because we need every penny; however, those high profile gifts are as much about the donors as they are about the recipients. Mackenzie Scott didn't attend an HBCU, nor did Robert F. Smith so their generosity is regarded as selfless altrusim and their motives are never questioned. Nevermind that Scott made her money from co-founding a company that engages in unsafe labor practices or that Smith evaded paying his taxes for years. I may not know how the alumni donors who give big money to their HBCUs made their fortunes, but I do believe that their gifts are motivated by their genuine love for their institutions.

And the other thing I know is that alumni donors do a lot more for the schools in the long run. Not all of us are able to drop half a million or more on the table as a surprise gift, but we can offer internships and book scholarships and serve as mentors. A few of my friends shared some very enlightening stories about their encounters with the late Vernon Jordan, himself an HBCU alum. He made it a point to assist and connect folks, which in turn is the real testimony of his life--not that he played golf with Bill Clinton.

So it matters who gives and why. It matters that some corporations would rather run elaborate scams to demonstrate their support when they are just exploiting us for pennies on the dollar. Do the math. And then next time you're attending a game at the big sports arena with the fancy corporate amenities, remember that your school had to compete for a gift that equates to the cost of a luxury box rental. Barely a year of tuition.

2. All money isn't good money. When I think back to one of the reasons why this became an important personal crusade, it was after I learned that one school participated in the Inauguration Abomination of 2017 because they needed the funds. That some of our schools have had to resort to serious pole dancing to keep the lights on should shame all of us into doing more.

It should also shame us to be in positions of doing more for our institutions, but choosing not to. When I said something to this effect on social media in a group, that was all kinds of clapback. One person suggested that he hadn't felt a return on his investment. Another felt that her school had deficiencies during her matriculation that needed to improve before she donated. And another person told me that my arguments were akin to shaming because not everyone could afford to give. Then more than a few people mentioned their student debt as reasons why they don't give.

I confess not to have sufficiently snappy retorts to any of those excuses responses. I regard my donations to my alma mater strictly as charitable gifts, so all I ever get in return are address labels and more solicitations. My freshman year dorm still doesn't have air conditioning and apparently the food is still terrible, even with expanded options. I can't speak to anyone else's shame when one year, I received credit for having given $5...and let's not discuss my student loan indebtedness (but I have forgiven myself for assuming that I would earn enough to pay it back, so it is well with my soul). I can't tell anyone what they can afford or what they should do with their money and from the beginning my position has always been and will forever be to give what you can spare.

When I say that all money isn't good, that point is made by the way the last Regime resorted to blackmail by claiming his fervent support of HBCUs. Remember how he did more for Black people since Abraham Lincoln, by proposing increased federal funding? For what it is worth, taxpayer money is our money, so it isn't as if he opened his wallet to give us anything (and those fines he donated are a clever PR spin on the commitments he tried to skip out on via his charitable foundation). But let him tell it, we practically owe Massa T for our very freedom.

Someone recently suggested that our principled stances in rejecting or returning corporate/donor funds has been counter-productive, and maybe he is right. We can always use a lifeline of support, but there is a difference between support and control. I need only point to the controversy brewing with the University of Texas over their school song and the anonymous threats from alumni to withdraw their financial donations. Not for nothing, there is serious money at stake--the type of money that could truly be transformative at an HBCU. I'm sure it ain't nothing to sneeze at for the University of Texas either, but I have to question whether any school should be held captive by the money of racist sympathizers in the year 2021.

Because all of this caterwauling is over a song set to the tune of I've Been Working on the Railroad...

Imagine being so offended about having to consider the feelings of the Black student population, whose grandparents might have been in that first group of admitted students in 1956. This was after the state created a separate law school just to avoid integration ten years earlier (overruled by Sweatt v. Painter in 1950). And where the numbers of Black students have been technically capped since the Hopwood v. Texas ruling in 1996, thanks to a legislative compromise that guaranteed admission to the top ten percent of the state's high school graduates. The nerve of these football players to have opinions that differ from those of their benefactors. What did they go to college to do, learn?

As any alum of an HBCU can attest, our opinions only count until the check clears. But perhaps my point is being made through the inadvertent acknowledgment that we can't give on that level. Our schools are not held hostage by outdated perspectives of how things were better back in the day, and they only need to tolerate alumni input a few times a year. That attitude isn't ideal either, but if it were up to our seasoned alumni, curfews would still be a thing. 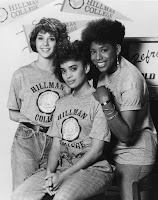 3. Just give. I recognize the many blessings that Spelman receives, and I realize that money could just have easily gone to save the whales or to plant a garden somewhere in honor of someone's cat.  I'm not here to challenge donor intentions or their legacies. I also don't want my school to become a laundromat, washing donor sins away. But since I have no influence on those outside of our community, then I focus my energy on encouraging those who share some aspects of a common experience to support our alma mater for future generations.

Give because your freshman year dorm still doesn't have air conditioning and the cafeteria food still sucks. Give because that same person in financial aid who lost your check is still there, working in the same musty office and still losing checks. Give so that the issues you had with your school won't be issues that persist for future students. Give because that student loan debt is owed to the government or to Sallie Mae or to Navient, not your institution. Give because your school is not a business, it is a charity, and your degree is not a piece of paper, it is evidence of the education you received.