I Am Not My Hair Bonnet

From the Busy Black Woman book of truth, "Be ye ever open to instruction," which in the vernacular is, even if you already think you know everything, you don't.

This is a general PSA for all of you who had a visceral over-reaction to this video message shared by the comic Mo'Nique last week. I initially saw the tweets and comments as comical, but that was before I saw the avalanche of criticism growing larger...and even though I changed my Twitter handle to reference a bee in my bonnet, that was before I saw her post and had a chance to really process her underlying message. So before I go on my tangent, I want to weigh in with my say on appropriate travel attire by linking to what I already said. I mean it. I will judge you, but I won't approach you unless you are un-lotioned (because that is a different kind of infraction).

However, let me make clear that the choice not to approach you is actually central to a larger issue. It isn't that I would be right or wrong in expressing my opinion, I believe it is more that my opinion would not be appreciated unless it was a compliment. If I walked up to you and said that I like the pattern on your panties that I can see because of your too short, see-through skirt, you might say thank you or think I'm a creep. Both reactions would be correct. Yet, in this current I-am-smarter-than-a-fifth-grader-world of social media, one might be more offended that I had the audacity to even look in their direction.

Be ye open to instruction. I just watched a portion of what was billed as an inter-generational talk with my forever Sister President Dr. Johnnetta B. Cole. She quoted this African proverb: The young go fast; the elders know the way. As she explained, we need your swiftness for the journey, but we've been here, know the terrain, and are only telling you what you need to know for your own good.

So, while y'all are dissing Mo'Nique for wearing her bathrobe while imparting wisdom, her point about showing more self-respect got lost. It became her policing Black women's stylistic choices instead of her being that Church Mother that hands you a lap scarf because your skirt is short. Look, I hated it too, but now that I am of the age where one might expect me to carry a lap scarf, a hand fan, some hard candy, and a shawl, I implore you to at least be open to why all of that became part of the whole armor of God. Our body temperature fluctuates as we age. Hard candy helps to keep the throat lubricated. And some dirty old man might be staring at my glory instead of giving all praise and honor to the Lord. It ain't even my ministry to be worried about his eyes or his soul, but now that we know how many young people were sexually exploited and abused in churches...

That Church Mother knows the way. When she pulls on the hem of our garments or when she hands over her shawl, we might get offended by her implicit judgment, but she is also instructing us about the ways of the world and of life. She is acquiescing to mores and norms that are outdated, patriarchal, and oppressive and she knows that. Yet, she is alive to provide that guidance because she survived being caught off guard in a compromising position with some entitled man who told her that no one would believe her story because of who he was. Maybe she still carries the scars and the shame, somewhere hidden on her body, covered up by a shawl or a lap scarf. And trust, she also knows that neither is a shield or a cape imbued with super repellent powers.

We appreciate your quick wit and determination to call out sexism. But she knows how to navigate it and still keep the faith.

Y'all can criticize respectability all you want. I've certainly approached my 40s with less concern about what people think about me or how they perceive me. And that is the wisdom that comes from accepting that the world will see me as it sees me and will mistreat me anyway. So the issue is not tied to some need to be deemed worthy to the outside world, it is about feeling my best in my own skin. My self-presentation to the world is a reflection of how I see myself, so pulling out an iron, wearing a bra, or putting on lipstick isn't patriarchal or respectable inasmuch as it is my choice to look the way I want in public. 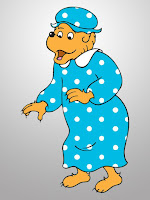 Are we being too literal in our dismissal of Mo'Nique's critiques about wearing bonnets and scarves in public? I know that Mama Berenstein Bear wore her hair bonnet in every book and TV episode, but she also wore the same blue polka dot house-dress and no shoes. Of course, an anthropomorphic cartoon character isn't really a role model. Instead, let's focus on the fact that at least through the 70s and 80s, typical daily hair coverings ranged from those plastic rain bonnets that the Church Mothers carried in their purses to the elaborate Sunday morning hats those same Church Mothers revealed on Easter and Mother's Day. Culturally, there are groups of women all over the world whose custom or religious beliefs require them to keep their hair covered.

So this isn't really about that. And I say that as a woman who carries this modern-day Grandma's rain bonnet in my oversized Mom purse. If I could save some more pennies, I might rock one of these fantastic wax print turbans on my next transatlantic voyage. I am not above wrapping a gele if need be (and I definitely think more of us should learn the variety of styles). And let's be real--Mo'Nique ain't tapping Alicia Keyes in the airport over this look, nor would she check her homegirl Jada Pinkett-Smith at the Red Table.

But she is right that some of you look messy on purpose, and Auntie YaYa agrees.

The real issue isn't what Sis said because plenty of us have dragged folks on social media for leaving their homes without first checking the mirror. When a school district suggested guidelines for appropriate parental dress for school drop-off/pick-up, most of us would agree that expecting parents to even have on clothing was de minimis. Casual Fridays, if we ever return to a full week of work, will probably be canceled. And we have all shared opinions about the person on the Zoom who should have kept her camera off until she got herself together (or the guy who should learn how to how to use his filters).

That some of y'all are out here on Blue Ivy's internet still mad at Mo'Nique for speaking her truth about pay inequity is...hmmm, rich. We're still thinking that her opinions on how racism manifests in a variety of forums is just her telling Oprah to suck it? As if she doesn't know a thing or two about being too big, too outspoken, and too Black for people to care what she has to say, even if it is the truth? So now that she's back on the chitterling circuit, recording PSAs between shows in the hotel bathroom, y'all are more focused on her audacity to say what she said than on what she is actually saying?

Coming from a sister who has been judged on her appearance all of her life, whose talent has been under appreciated, whose voice has effectively been relegated to her Instagram followers...y'all don't know the way like she does. She is telling you that you can do everything right: star on a syndicated sitcom, be a Queen of Comedy, even win a damn Oscar, and folks will still disrespect you and treat you like you ought to be happy to get those coins from the fountain they offered. You can be talented. You can be beautiful. You can be skinny. You can be a Black bird-watcher and some white lady will call the cops and falsely claim that you are threatening her life.

Mo'Nique knows that what we wear on our heads doesn't even matter if folks are more obsessed with judging our skin color. She knows that when Oprah was trying to buy herself a fancy silk hair scarf, the saleswoman at the Hermès store in Paris wouldn't reopen for a Black billionaire. She knows that Meghan Markle can wear a fascinator just like her sister-in-law and still get trashed in the British tabloid media. Simone Biles will fix her teammates' hair ribbons and still get points deducted for pulling off truly amazing gymnastic feats. And that the tennis press will insist on imagining a rivalry between a Black Grand Slam champion and a white ingénue.

Y'all are quick to point out that Black people are over-policed and profiled by appearance even when we conform to the so-called respectable norms. Black travelers with locs and braids must submit to intrusive searches of their hair to go through customs and TSA. So your ratty sleep bonnet or messy doo rag won't shield you from those indignities. Auntie knows that, so her point is that we need to carry ourselves with dignity and self-pride anyway. She said that the world will do what it does, so you must choose how you will show up.

Let's keep it real, Vice President Harris and former First Lady Obama and every other Black woman in the public eye wears a hair bonnet. Even the Queen of England wears one (and we know this because those royal curls are tight like she faithfully rolls them in tissue paper and pink rollers every night). We ain't never going to see any of these women informally casual, wearing fuzzy slippers and pajamas in public. They face ridicule and unfair judgment too; yet they exude the utmost confidence and presence as they walk through the world.

Mo'Nique is saying that you have that same power to make the world see you in spite of how it defines you. Carry yourself with dignity. It isn't your fault that the deacon won't focus on the sermon, but here is my shawl in case your legs get cold, sweet baby. Be ye open to instruction because you may be quick, but I know the way.

Finally, a word on ashyness, which is a heinous act of omission that will earn you a rebuke by the Busy Black Woman. You can't be walking around unmoisturized, because too much friction can be flammable. Therefore, if someone offers you some hand lotion, take it in the spirit of generosity and concern that it was offered. Only God may know what is up under that sleep bonnet, but everybody can see them crusty knuckles and finger creases...so be ye open to instruction, and a few squirts of lotion.

Posted by Ayanna Damali at 9:30 AM