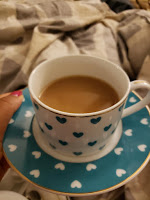 The year is 1994. A lot happened that year to me personally, so some of what I am processing is a combination of recalling that time in my life and trying to place it in the context of what is happening to the characters. (I know how self-indulgent that reads, but trust this is a necessary part of where this is going.) If you are just tuning into the show, the first two seasons provided a lot background regarding the life and struggles of our LGBTQIA+ siblings in the 80s and 90s. I began watching during the last three or four episodes of the first season (which I will revisit so that I can have a more complete appreciation for certain characters), but I think you can start from wherever to appreciate aspects of this journey.

So where do I start in this unpacking? Do I begin with my initial impression that this was a Fame redux--a show about aspiring dancers and young models in New York during its grittier pre-Disney on Broadway days? Or was this a re-imagined Dynasty based on family dynamics and drama fueled by the relationships that we choose versus those into which we are born? Then once I realized that POSE is both and neither because that is the trap of assuming that shows like Will & Grace, Ellen, and even Queer Eye for the Straight Guy were any more ground-breaking and progressive than 80s sitcoms were on race...

The category is LIFE!

Real life, not the Tyler Perry morality play version that treats AIDS like an Old Testament biblical plague for unrighteous women. Not the privileged marginalization that dismisses sex workers as trannies and addicts. Not the predictable rejection by one's biological parents and family for unnatural tendencies that were never addressed especially when the victims were male.

LIFE. Out load and unapologetic. Messy AF. Flamboyant and superficial, yet creative and inspiring. 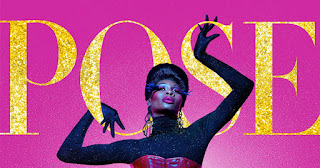 What would it have meant to live free in the 1970s? How many people were pushed back into the closet because of that Disco Sucks stunt? What about in the 1980s when movie cowboys and stuntmen apparently knew more about everything? What about in the 1990s when we said that our hair stylists, choir directors, and interior designers were cool as long as they didn't talk about their personal lives? What about in the 2000s when having a gay BFF was as hip as voting for Obama?

What does it mean now that America is used to Rosie O'Donnell, Sean Hayes, Cat Cora, Nathan Lane, Don Lemon, Anderson Cooper, Robin Roberts, and even Pete Buttigieg's husband because they are non-threatening and respectable? Hell, we don't give Caitlyn Jenner the ridicule she truly deserves for thinking she should be the next Governor of California. What we aren't comfortable with are people defining themselves without our approval. For that which we cannot proscribe is that which we cannot control.

POSE is awakening me to a lot of misconceptions I had as a young woman. I was raised to fear Hell as a place in the afterlife, instead of a state of living and being in this realm. Hell is hunger and deprivation. Hell is living without basic needs of human dignity. Hell is ignorance. Hell is living a life that someone else has restricted you to...and that can be a gilded cage or in squalor. Hell is desperation.

So I can only imagine what it must be like to receive too much of the wrong kind of attention. How it must hurt to be told that God loved us enough to send His only begotten son to die for everyone else's sins, except for yours. Hell is getting disowned by the people who brought you into this world, because they are ashamed and small. It is masking your hurt in drugs and fucking with the kind of recklessness that that says I if I die, so be it. Hell is not getting infected with HIV because trust me, there are plenty of horrific ways to die. The difference is that HIV and AIDS caused too many people to die forsaken and alone.

I am more aware that my choices as a young woman in 1994 were once subject to similar condemnations, but I could make everything right by getting married. I could feign virginity with a fancy white dress, legitimize a bastard love child by marrying the father or some other man. I could become an honorable woman by a simple declaration of the state. If someone tried to shame me, I could call it sexist or chauvinist and rest assured that the name would sting momentarily (although it wasn't the same as being called a whore).

Until recently, we could disregard the dying wishes and feelings of people on the basis of who they loved. We could invalidate families as if they never existed because lovers and special friends had no recognized status under the law. Imagine if you will how the parents who rejected their children could suddenly reappear and override choices and erase every trace of their disapproval. They could rewrite narratives out of whole cloth to reinterpret lives that they had disavowed. Consider having no rights that others were duly bound to respect because you were gay/trans/queer...and to justify that level of cruelty, to have someone shrug and then point to several neatly highlighted passages in their Bible. Ignoring the verses that say do unto others as you would have it done unto you and to love your neighbor as yourself, can you fathom the smugness of someone leaning into their prejudices and then implicating God as the one with the issues (His Word, not ours)? 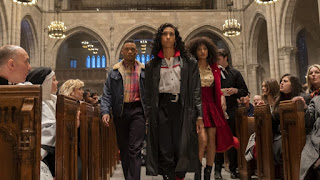 In 1994, we claimed our small towns were all Eden and the dens of iniquity were Sodom (New York) and Gomorrah (San Francisco). However, when hurricanes and tornadoes and flooding brought disaster to those small towns, we blamed the gays. We claimed that their love was more dangerous than our hate, and that our God was displeased by them. We never considered if His displeasure was with us for casting out our children and for our bad environmental stewardship of the earth. Instead, we prayed for their deliverance, not from the clutches of the streets, the prisons, the brothels, or the crack houses...but from the perversion.

That was then. Now we have evolved to the place where we worry about personal pronouns, bathroom usage, rainbow cookies, and who gets to run track.

Now a few thoughts about POSE and the fact that it is ending after only three seasons. It probably could have gone on for another two, but I think that the time jumps have made this abbreviated run inevitable. My biggest complaint is that if it was known in advance that this would be a limited run series, then some of the character development should have been offered on the front end instead of now. There are loose ends that deserve better resolution than what we're getting, which is why we're all so emotionally spent after each episode. Without spoiling anything, there is no satisfying way to resolve much of what we anticipate will happen by the closing credits of the finale. And I don't know how I feel about that.

What I do know is that this show has pushed me to do the kind of self-reflection that hopefully will make me a better ally. I said as much two years ago and I meant it. The thing about calling oneself progressive is to evolve. We have to accept that the world is not static and that the complexities of living among human beings is ever changing. Little boys want to play dress up and little girls want to build cities with primary colored Legos. There is a lot we need to normalize, such as allowing our children to be freer than we were. It means creating space for people to feel that their lives matter. How much beauty and creativity is lost to despair and premature death?

Back in 1994 when there were fewer letters in the acronym, if someone compared the LGBT struggle to the Black experience in America, we would shut it down especially if the person making that assertion looked like Neil Patrick Harris. What in the world did Doogie Howser know about struggle? And that has been the great awakening POSE has brought about--in every possible way the Black and Latinx experience is perpetually marginalized, even among our gay/trans/queer siblings. To appear palatable, the LGBT struggle focused on mainstream identity and acceptance, so when it became wearing flannel, driving a Subaru, and adopting children America relented. Straight actors dressing sharper (gay) or messier (lesbian) were fine as long as they kept us laughing. Thus, by the time we get to depictions of being trans, we get Kathleen Turner lowering her already husky voice in Friends or Jeffrey Tambor in a bad wig and matronly clothes in Transparent. It's quirky and weird, and uncontroversial like the dedicated PRIDE aisle of merchandise at Target.

POSE doesn't deal with the warm fuzzies. There are light moments, humor, and of course the theatrics of the ballroom, but there is also grit and violence like the death of a celebrated queen killed by a john. For those who couldn't find acceptance from the coffee shop/J. Crew retail mainstream, they did what our people have done since the beginning and created beauty from what had been thrown out or left in the gutter. In some cases, it was about challenging norms: designer Willi Smith transformed street-wear into haute couture and singer Sylvester infused gospel into his dance club anthems. Alvin Ailey added jazz and blues to the ordinary movements of Black and Brown bodies through life and called it American dance theater. And designer Patrick Kelly took inspiration from mismatched buttons and an old racist icon, the gowliwog, to create subversive fashion. That all four of them died from AIDS-related complications is what POSE sought to remind us. The high cost of living can be fatal.

More than 25 years later, if we are finally saying that love is love, then so too is hate. Suppression is oppression and violence. We cannot force people to contain, edit, or hide themselves because beauty does not flourish in the closet...it languishes there, collects moth holes, and rots. Creativity must be seen, heard, and experienced in order to fully exist. In the end, we all come to the place where living free is...LIFE. 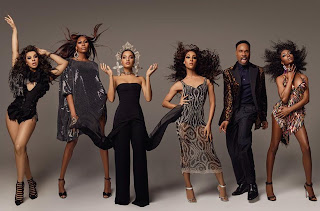 Posted by Ayanna Damali at 9:27 AM