Twas the day after the Christmas and I spent the afternoon on the sofa with a bottle of sparkling wine, chicken strips, and a few hours of kid-free silence. So naturally, I did what every other Insecure fan should have been doing in preparation for the series finale later that evening--I caught up on the episodes that had I missed or half-watched from this last season.

Now, because I am mindful that there are Busy Black folks out there who aren't fans or maybe haven't had a chance to watch the finale, so I won't spend that much time this Monday quarterbacking the finale. Watch it, come to your own conclusions, and then come back here for my take on what I hope will be the impact of Insecure for the long-term. 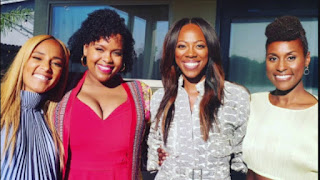 1. Conversations with our families about estate planning - This really hit home for me. My parents wrote their wills some twenty years ago, long before there was a notion of the chronic health issues we have faced for the past ten. My Mom, on the sage advice of Suzie Orman, had the foresight to invest in long term care insurance, which has made been a lifesaver in every possible way. While my Dad is still old school with respect to his faith in life insurance and bank savings, it was the financial planning that my Mom initiated that has really made this season of their lives manageable for us as their children.

There's so much more to say on this topic, because Black people can be inconsistent when it comes to death. On the one hand, we deal with it as a part of life, yet it amazes me just how reluctant our families are to plan for anything other than the funeral. I don't want to think about dying either, but if these last two years have taught us anything, it is that we need to have contingencies in place to deal with the unexpected. TALK TO YOUR PARENTS! Get their passwords. Have them walk you through their finances. Ask them how they want things to be settled. And talk to your siblings so that everyone is on the same page. Ain't nothing worse than drama and tension on the front pew that never gets resolved.

2. Embracing imperfection by dropping the Black superwoman trope - The name of the show was Insecure. A lot of y'all missed that. Some of you were very critical that Issa didn't have her shit together from the beginning. Some of you probably thought highly of Molly until she realized how much of a hot ass mess she had been for four seasons. Some of you were more concerned about Tiffany wearing your sorority colors than you were about the vulnerability she showed as a new mother suffering with post-partum depression. You might have missed the fact that Kelli was sober this entire season, which was a good thing considering that she pissed her pants during Coachella and got into all kinds of nonsense whenever she imbibed. Y'all were siding with Lawrence's irresponsible fuckboi declaration that Condola blew up his life when she got pregnant (which we're going to revisit a little later).

Life is messy and not even fictional people are perfect. Thank goodness! 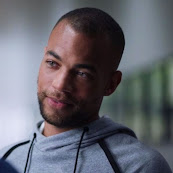 3. Addressing the stigma of mental health, especially among Black men - We saw Molly with a therapist, and I know that the religulous among you will argue that all she needed was Jesus. But I'm sure He would have sent her to a therapist too. Despite the ultimate outcome of his story arc, Nathan was one of the most valuable characters, working through his issues with others and with himself. Unlike most stereotypical depictions of mental illness (the homeless vagrant or the drug addicted loser), it was refreshing to see a high functioning, yet flawed individual who owned his issues.

4. Establishing and maintaining mature co-parenting relationships - So we've reached the hill where I plant my flag--Lawrence, the dude who perpetually let life happen to him finally grew a pair! The fact that it took his fast-talking friend Chad to blurt that out at him for it to finally sink in that he needed to make some choices and man the fuck up (and you thought that was only about his on-and-off again situationship with Issa)...

And one of those choices was to be more present in the life of his son with Condola. She didn't get pregnant--they were fucking. Birth control goes both ways, but sometimes it fails and one of those little swimmers is gonna go all the way (we all saw Look Who's Talking). Given that Lawrence was rather promiscuous generous, I'm surprised that he hadn't created more babies...but y'all aren't ready for that conversation.

Instead, let's keep the focus on the fact that if more folks took responsibility for their actions, the world would be so much better for the children that result. I say that as a lawyer who used to represent parents in their custody disputes. I say that as a woman who has read some of the really shitty takes that some weekend Dads have expressed about paying child support. I say that as a mother with equal disdain for the toxic Moms who feel entitled to erect insurmountable barriers to healthy co-parenting because they have irrational trust and control issues.

Look, parenting is hard within a marriage, let alone between two households. We only got one full episode, a HUGE blow-up, and a few tranquil scenes scattered among subsequent episodes, but I assure you, it took a LOT of work to get him to that happy ending.

5. Blackness is Beautiful - I mean, we know this but I don't think the rest of the world always gets to see it presented that way. Sure, we've had sitcoms with all-Black casts that have been unapologetically Black in the past, but this time we got an experience that showcased Black Los Angeles as well. We saw Black people at art galleries, at outdoor festivals, planning events, attending Coachella, hiking, hanging out on the beach, owning businesses, and doing all of the bougie stuff that white folks assume we don't do. We drink coffee too, but in every other sitcom, we'd be the sassy barista or the silent busboy. In any other sitcom, we'd see a few Black faces in the crowd and that would be touted as inclusion. For once, it was great to see us as the foreground and the background. It was significant to depict various aspects of Black life that weren't confined to any one space within the community--the Dunes apartment complex in Inglewood was just as integral as Molly's downtown office or Crenshawn's warehouse workspace or Black alumni weekend at Stanford.

It matters that Issa Rae, the actress, writer, and producer was an aspirant just ten years ago when we first encountered Misadventures of Awkward Black Girl back in 2011 on YouTube. Like most people who became fans of that effort, who could have foreseen that it would lead Rae to the point where she is today? Not just in her career, but also the other Black actors, writers, and directors that she took along with her for the ride: Stella Meghie, Melina Matsoukas, Prentice Penny, Natasha Rothwell, Jay Ellis, and Yvonne Orji. I am thinking about Tracy Oliver, the antagonist on the web series, who is now a budding media mogul in her own right. There is also Robin Thede, the writer and producer of the hilariously funny and Emmy-nominated A Black Lady Sketch Show. I am thinking that when Rae stated that she was rooting for everyone Black, that meant EVERYBODY.

Of course, the predictable backlash to this will be to point out that there is no such place as Black LA if we only make up 8% of that city's population. Some snooty TV executive, probably the same guy that canceled Girlfriends without a series finale, will wonder aloud where in Los Angeles they found that many Black people and whether it was truly representative if there were not as many Latinx or Asian Americans depicted (because it is perfectly acceptable to accuse us of excluding others). Surely, token efforts to integrate shows like the original Sex and the City or Girls, which celebrated a very specific demographic of empowered white woman (the Christines and Kristins) would have more impact. Just greenlight a reboot or a pre-boot with a Black girlfriend and set one of the episodes outside of their typical exclusive enclaves of privilege. Send Miranda Hobbs to a Black church in Harlem with her law school professor. Because that isn't racist...

But it ain't progress either.

I would love for the legacy of Insecure to be a more sustained movement towards inclusion in Hollywood--more diversity in directors, writers, production crews, etc. It would be great, but I lived through the 80s and 90s. Ground-breaking popular Black shows still get marginalized while mediocre mainstream shows live on in syndication. I still believe that our stories deserve to be told and that there is plenty of space on the red carpet for more diversity, but I don't want to wait another 30 years just to make incremental advances. Because Issa Rae decided not to rest on her dreams, someone else needs to wake up and follow suit.

Are you waiting on a chance, or are you taking any?

Read that again, look at the calendar, and get then serious about making that next move. If you saw the finale, that was a personal message in a bottle that even if the ground is shaking beneath your feet, trust yourself...Everything is going to be, Okay?!

Posted by Ayanna Damali at 2:16 PM