I really did not want to use ten to fifteen minutes of your valuable time on another angry rant about these Stunt Queens voters keep sending to Washington, nor did I intend to spend at least four hours writing one, but it needs to be said. Because some of these meaux faux y'all be sending here...

I thought that I could just rattle off a few paragraphs in disgust on the FB page and maybe reach the same six curious people that regularly see my posts. After all of these years I still can't outwit the algorithm, and I have accepted that. Which is one of my New Year Resolutions--to stop worrying about the internal sabotage and just set my sights on growing my base in other ways. And that is one of the main reasons why I am so vexed...

I don't use my little corner of cyberspace to say anything outrageous or misleading. I make carefully thought-out and intentional statements. My reasoning is usually sound. Even when I am fueled by emotion, I am neither mean-spirited nor a bully. I am also not a dumb bitch. But apparently that is what it takes to be heard. Or get elected to Congress these days.

Perhaps you might be reading this and thinking, well why are you complaining then? If you think you are so smart, why not run for Congress so that you can be heard? Hence, this rabbit hole lecture on why this country is doomed if y'all don't get serious about saving this democracy. 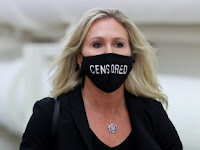 Earlier today it was announced that Rep. Marjorie Taylor Greene (R-GA) would be permanently banned from using her personal Twitter account to spread misinformation about COVID (and other assorted lies and conspiracies). I had typed out six extemporaneous paragraphs on my Facebook page to get to the point where it stopped making sense to argue that I don't care about her, because I do. Therefore, I decided to migrate that rant to this space where I can flesh out and explain exactly why it matters that elected officials like Greene deserve to get singled out and exposed as vivid examples why you just can't send every crazy loud mouth to Congress.

As a factual introduction, I need to debunk the arguments that Greene is being unfairly silenced or censored. She is not. She still has plenty of communication avenues to share her insanity, including access to her official Twitter account which is tied to her position as an elected Member of Congress. Presumably, she can continue to tweet all kinds of nonsense and foolishness because it serves the public interest and her constituents to know that she is batshit insane and stupid. My best guess is that Twitter will flag her comments with a disclaimer if they contain false or misleading information, which is what was done with the former DESPOTUS when he was accused of inciting violence after George Floyd was killed.

The issue is not whether she can say whatever she wants, but where she can say what she wants. The First Amendment offers this beautiful declaration that the people ought to be able to express themselves without fear of government sanction. There have been several cases argued over the years that have provided some guidelines for how that speech is regulated, so I won't delve into all of that here. Just know that the right to free speech is subject to certain reasonable time, place, and manner restrictions, as well as considerations for content. The operative word contained in that amendment is Congress.

Twitter is not Congress. It is a communication platform.

When you signed up for any of these various social media platforms (Facebook, Twitter, Instagram, WhatsApp, Tumblr, and even an old school platform like Blogger or MySpace), there was an agreement that most of us skipped reading. In essence, it said that we didn't own the space, but that we were being granted access to use the space. Therefore, it is a misconception to believe that we have the right to use these spaces in any manner we want.

Now for the most part, we know that the content police overlook a LOT of what goes on (so I won't digress into a side rant about how these same platforms are used for bullying and various criminal enterprises), but they are. Knowing that social media is internally regulated, it is problematic when someone in a high-profile position like Marjorie Taylor Greene (MTG) or the DESPOTUS with millions of followers abuses the privilege of access. They have the ability to influence how people think or behave just by offering an opinion or sharing misinformation or promoting propaganda.

When we call social media a communication platform, we are literally saying that it is the online equivalent of a step ladder and a megaphone. It is a podium, a stage, or a pulpit with a microphone and giant loud speakers. I've addressed this previously, but it bears repeating and emphasis--be wary to whom you pass the mic.

For lack of a better pop cultural reference, MTG is that bully in the racoon hat from A Christmas Story. She lurks in the alley to jump out to terrorize people, whether it is a young activist with whom she disagrees on the appropriateness of guns in schools or her fellow lawmakers whom she taunts for wearing masks. Having been stripped of her committee assignments for her excessive trolling barely six weeks after being sworn into her term, she spends most of her time loitering in the hallways and tunnels, devising a workout alternative to CrossFit in the Members gym, and auditioning for right wing media outlets as insurance in case she doesn't get re-elected.

In other words, she is a waste. I cannot emphasize how utterly disgraceful it is for this woman to even have an official Twitter account, let alone an office and paid staff. The fact that she occupies a seat in Congress from which she accomplishes nothing other than to promote herself is beyond words. I don't care how or why she got elected. I just know that she didn't question the legitimacy of the votes that sent her here back in November 2020. Yet, she has been a vocal and visible proponent of the Big Lie that somehow there were illegitimate votes cast from her state that resulted in the ouster of MAGA Man, the hero to whom she has pledged her allegiance. Because it sure ain't to the same Constitution we both swore to uphold and defend.

To be clear, my disdain for her isn't just ideological. There are several Stunt Queens serving in Congress and I get increasingly frustrated with every single one of them, from both political parties. At the end of the day, the job is to represent the people who elected you, not to spend half the time engaging in silly Twitter fights or negotiating a primetime appearance on cable news or a Sunday morning talk show. The personal affront of their existence is why I have chosen violence as my opening salvo this New Year.

And because I don't have a congressional vote. The District of Columbia has a non-voting Congressional Delegate who can introduce legislation, vote in committee, but she must appeal to her Colleagues to vote on behalf of the citizens of this city. Therefore, I couldn't position myself to run for political office on behalf of my beloved hometown or its 700,000+ citizens even if I wanted to (and no thanks, I would rather fight from the outside). If I had the temperament, I guess I could run for City Council or Mayor thanks to Home Rule charter. But with powers limited to the purview granted by Congress, and the way I cuss...

A year ago, the world witnessed how partisan elected officials disregard the citizens of DC as expendable. While MTG and her co-conspirators in the Insurrection Caucus encouraged the rioters as they breached the Capitol, the DESPOTUS refused to engage the National Guard to quell the uprising. No concern for the lives of office staff, facilities and maintenance workers, or the Capitol Police and there was no effort to protect the residents of the surrounding neighborhoods if that mob had continued their rampage beyond the Capitol grounds. When the Mayor, the City Council, and various experts cited the limitations of Home Rule in invoking the mechanisms to protect the City in a historic hearing on Statehood, their pleas were dismissed along partisan lines.

Thus, it incenses me that this woman and I, same age and with roots from the same state, are not treated equally as American citizens. I worked in that same Capitol building more than 20 years ago. I can't even enter the Longworth Building, where her office is located, to transact business at my credit union branch because of her seditious antics. If I participated in a peaceful protest to urge passage of the John Lewis Voting Rights Advancement Act on the street, how long before I would get arrested? She lost use of her personal Twitter account, but she can still reserve time to take to the floor of the House of Representatives to spew conspiracy theories and racist rhetoric to all of America, thanks to the C-Span cameras. Yet, no matter how eloquent, rational, and right I am in my indignation, I would be lucky to reach 25 people with this rant. I might get a few RTs, but that rarely happens in the eleven years I've been blogging...

So, ban that broad because anything less than pulling the cord on her bullshit is to concede that what she allegedly has a right to say is more important than the impact of what she says. She can't shout FIRE in a crowded theater and then shrug when folks get trampled. She sought this attention and the exposure, so she must use it responsibly or lose the privilege. And face the consequences same as her MAGA Man who lost his account too. What is good for the goose is also good for the gander.

Finally, I hope not to spend this much time and energy on Marjorie Taylor Greene again in the foreseeable future. She will continue to piss me off, but the next time, I will take action instead of offense. She represents a district in Georgia that might be hard to flip given redistricting shenanigans and partisan election law changes, but there are four declared Democratic challengers and one Republican. Surely any one of them can do a better job of serving in Congress. Statewide, I must work to re-elect my Morehouse Brother Rev. Raphael Warnock to the Senate and to elect my Spelman Sister Stacy Abrams to be the first Black woman to serve as a Governor. We need to register voters and organize for other local elections. I need to save up a little bail money, in case I run into some good trouble (although my Daddy has pledged that won't happen if he can help it). Let's not get distracted by her nonsense because that was clearly the job she was sent to do.

Posted by Ayanna Damali at 8:03 AM