Of course I could not let this day pass without any commentary.  Although I am not wearing my special tee shirt as planned and I may not get to watch The Wiz, I just had to acknowledge the significance of this day.  It is the day that Michael Jackson became immortal.

I remember every detail of the day two years ago--the youngest brother was just leaving my house and I was headed to ballet class.  While packing my dance bag, the news flash came that MJ had collapsed and had been rushed to the hospital.  In the car ride over to the dance studio, radio stations were already playing his music although there were conflicting reports about his status.  In dance class, I was too distracted to focus and kept thinking, what in the world would it mean if Michael Jackson was gone.

And now we know.  Two years later, and I totally understand how Elvis fans feel every August 16th.  But instead of mourning, I celebrate!


As someone who has had a complicated perspective on MJ as an adult, on June 25th, I choose to remember the entertainer I loved.  I remember playing the Thriller album every day after school.  I remember discovering the Off the Wall album and then playing that one every day as well.  I remember the poster of him wearing the white and yellow outfit and precisely where I positioned it on my bedroom wall.  I remember thinking that the 13-year age difference between us would be insignificant once I reached 20.  I remember writing a letter to the MJ fan club with my suggestions for a Pretty Young Thing video.  I remember how lucky I felt to go to the Victory Tour concert in 1984 at RFK Stadium and how we had seats in the absolute back row.  To this day, I still believe that my cheering silhouette is a part of the concert footage for Billie Jean (wait til I find it to prove it to you :)

Then I got to middle school and Purple Rain came out...and then all of a sudden, MJ seemed way too elementary school.  Then I fell in love with New Edition and then LL Cool J, and the MJ posters were replaced.  When I got to high school, he released Bad and my love for him was rekindled briefly until my heart was broken by not being able to secure tickets to the Bad Tour.

And then I went off to college where I spent a lot of time listening to more Prince, more hip hop, lots of Sade and smooth jazz, as well as various New Jack Swing artists.  My friends and I all dug MJ again when he released Dangerous and the sexy videos that accompanied it.  For several weeks, we mimicked the Remember the Time routine as we had done with Thriller and Beat It a decade earlier.

But then the molestation charges came and he hastily married Lisa Marie Pressley.  It looked every bit like a publicity stunt, supported by a lot of strange PDA moments and TMI interviews, most infamously with the Oprah.  Then there was another oddly-timed marriage and the baby dangling incident in Germany.  And by the time the next round of molestation allegations surfaced, I had lost faith in him.

In the end, if we were to measure what MJ did above and beyond his musical legacy--AIDS research, hunger in Africa, the environment, the United Negro College Fund (yep, MJ never forgot that he was black), and his unwavering love for children, it is much easier to forget all of the insanity.  Two years ago, the man died, but the legend lives on. 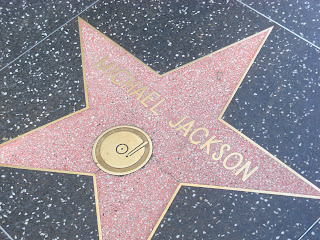 Posted by Ayanna Damali at 6:30 PM

Email ThisBlogThis!Share to TwitterShare to FacebookShare to Pinterest
Labels: remembrance