Sometimes, you have to change the menu, so this week's Fried Chicken is being served on what would typically be a Red Beans & Rice Monday.  Actually, since awards shows tend to air on Sundays and the post-itis commentaries are most timely on a Monday, then we will go with Red Beans and Rice for $200, Alex...

Fried Chicken it is!

What I did watch instead of the BET Awards was Soul Food for the umpteenth time.  And after mourning Big Mama and wondering what in the heck happened to Vivica A. Fox's career, I then watched Jungle Fever--another movie that I've seen at least ten times.

Now you probably disagree that these two films should be described as bad black films; however, before you accuse me of being a bourgie snob, I'll ask you to think back to the last truly excellent black movie you saw...

And I'm betting that your answer was Love Jones, which came out nearly 15 years ago in 1997!  (Take a moment to collect yourself because it has really been that long). 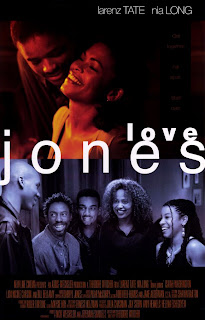 This is not to say that there have not been several pretty good or even quite enjoyable black films since 1997*.  I really enjoyed Undercover Brother and I thought The Best Man was pretty good.  And there have been plenty of great movies with black actors in them, but let's face it, we reached the mountaintop with Love Jones and we have not made it back since.  Even the great Spike Lee has fallen short of late (did anyone get through Miracle at St. Anna and could you please explain it to me?)

When it comes to bad black movies, we watch, knowing how awful they are, and we justify their existence because there are so few alternatives.  Similar to being on a diet, no matter how many calories you are trying to count, if you are truly hungry, you are going to eat the fried chicken!  You'll try to justify it by looking for raw veggies later or by drinking several glasses of water, but the damage has been done--and you enjoyed every crispy, crunchy bite!

I will not recount, nor will I debate the merits of black movies that some would argue challenge my hypothesis because the choices either come from Tyler Perry's magnum opus or from whatever else another random black director released.  And umm, well...the best I could think of was Baby Boy**.

Now, lots of non-black films are equally craptastic, if not worse, and we pay good money to see those too.  For some unknown reason, Jennifer Aniston still has a career (and again, wondering why not Vivica)...and so does her ex-husband Brad Pitt (which now makes me wonder about Leon).

But like a good two-piece meal, I will eat/watch if my options are limited.  I watched Idlewild again last week because nothing else was on, and because it falls into the 'enjoyable' category--not horrible, but definitely not that good.  Heck, I will even admit to having watched a Tyler Perry film on cable when there was nothing else on and I couldn't sleep because I was detangling my hair in the middle of the night and the husband was snoring too loudly...

* 1997 was a good year for movies in general, and saw the release of four major black films including LJ, SF, Eve's Bayou and Amistad.
** I know my selection of BB is controversial...but this is my blog! (And I concede that Antwone Fisher, Dreamgirls, Ray, The Pursuit of Happyness, and The Great Debaters are all better than 'pretty good' films).
Posted by Ayanna Damali at 4:24 PM