I finally get to do a recap of an award show!  But only a partial one since I only caught the last half hour...So this will be a recap of my weekend instead (I know, you can barely contain your excitement).

Clearly the biggest news of the weekend was not Hurricane Irene.  She came, she dumped a lot of water on us, and she took out a lot of tree branches.  But in the DC area, that could have been any heavy thunderstorm.  Still, I did my Busy Black Woman best to be prepared for the worst case scenario, which was losing our power for ten hours.  Thanks to my strategic planning, we now have four 50-pound bags of sand, a three-gallon cooler full of filtered tap water, lots of non-perishable snacks, and a bucket of Harris Teeter fried chicken.

And we know that the biggest news was not the cancelled MLK Memorial Dedication, since a lot of the activities took place with a few minor changes before Irene made landfall.  The Very Important People who attend galas and luncheons and prayer services and special fraternity dedication ceremonies got to do all of that stuff and then promptly left town.  The rest of us mere commoners got to see the Memorial all week anyway since it opened last Tuesday.  The husband and I went down there last night, and like every other monument, it was teeming with tourists and their cameras, which means I will be cranky in a few weeks because of the unnecessary foot traffic jams caused by picture-posing clumps of people standing in the middle of the sidewalk.  So the only thing we missed was another speech by President Obama...darn!

In other words, it is a really beautiful monument: 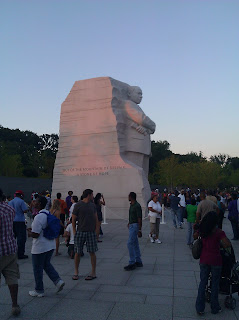 It also is not big news that downtown DC sucks on Sunday nights, so we made our way to Logan Circle for dinner at a swanky Italian spot.  After we were seated, I glanced at my Twitter feed to learn that I was about to miss the Video Music Awards (VMAs).  And it dawned on me that I really need to pay closer attention to the TV schedule so that I don't miss every award show...

Then I saw it.  The very next tweet.  The biggest news to hit us since last Tuesday's earthquake and the false rumors of a Will and Jada divorce:

Once we got home, I watched the last half hour or so of the VMAs, which included that very bizarre presentation by Cloris Leachman and the cast of Jersey Shore.  And then there was the Lady Gaga/Jo Calderone odd impersonation of Danny Zuko or Bob Dylan or the Fonz (or maybe all three).  And while I wondered what the heck Russell Brand was really trying to say in tribute to Amy Winehouse, the great Tony Bennett took to the stage and I forgot for just a minute that this was the Teen Choice equivalent of the Grammys.  And then I was confused as to why Bruno Mars performed an Amy Winehouse tribute and not Adele, who was sitting right there all made up for something clearly more formal than the VMAs.  And then the perfectly bland Katie Holmes presented the final award of the evening to the perfectly ridiculous Katy Perry, and again as the camera panned over to Adele, I wondered what award show she was all dressed up to attend.  Then Lil' Wayne's irrelevant-not-worth-the-effort-to-hyperlink-tight-jeans-wearing-azz took to the stage and then it was over.

Of course, if you were looking for a real recap of the show, you can check last night's Facebook newsfeed or CNN, The Washington Post, The Huffington Post, or any other news outlet since we all know how Irene turned out.  Then again, the biggest news is that Beyonce is now a Busy Black Mama-to-be, so here is her confirmation performance, if you will:

Posted by Ayanna Damali at 2:51 PM