(This should have posted two weeks ago, but you know how things get sometimes.  And for whatever reason, it felt as if I was writing in circles :)

On Sunday the 14th, we celebrated the birthday of pioneering Academy Award-winning actress Halle Berry with a poll on the Busy Black Woman Facebook page of our favorites among her various film roles.  And by chance, BET treated us to one of her earliest roles in the film Boomerang. 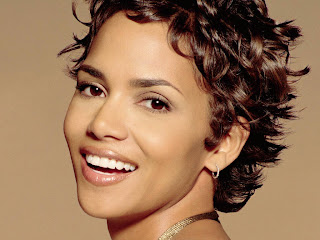 Or, I might have chosen Boomerang, which may or may not have been among the choices offered, but that is what the husband voted for once he realized there was a poll.  If you were not old enough to see R-rated movies in the 90s or if you were living under a rock somewhere, this movie was Eddie Murphy's last really funny film.  It featured Halle as the "nice girl" opposite Robin Givens as the "not-so-nice girl".  I will not spoil it for you by telling you how it ends, but I will say that Halle made two major contributions to this film: (1) the line that essentially launched Toni Braxton's career and (2) her signature ear-length bob (because before there was the Rachel, there was the Halle haircut).

And that brings me to the point of this article--can we "boomerang" back to the 90s?


But before I go there, let me take a moment to share what actually inspired this sentiment: on Facebook that same week, one of my friends mentioned that her daughter referred to the 80s as the time when old people were young.  I responded that for those of us who were young in the 80s, we felt that way about the 60s.  A few LOLs and a little bit after LMBO and ROTFL it hit me--I am one of those OLD people!

Not that I am all that sentimental for the 80s...(ok maybe a teensy weensy bit) since I can blow an entire day on a marathon of I Love the 80s, reruns of The Jeffersons and The Golden Girls, and classic R&B videos on Vh1 Soul.  But most of the mainstream pop culture 80s wistfulness occurs in the vacuum of a typical John Hughes film--too much big-haired acid-washed suburban rebellion.  Sure, everyone enjoyed Michael Jackson, The Cosby Show, and two mediocre Karate Kid movies (the third one too turrible to acknowledge), but it was not until the the 90s when America finally began to acknowledge that her black and brown citizens were educated, had jobs, pursued romantic relationships, and did not all have relatives who appeared on COPS.  These things were not the exceptions, but the rule.

I grew up in the 80s, but I lived in the 90s--the decade when I went away to college, when I met the husband, and when I actually believed that life could not get any better than what it was at the time.

The following nostalgic rose-colored flashbacks have been brought to you by the real-life sense that the older I get, the better things were way back when.  Sadly, my twenties are becoming a distant memory--I am already at that point when the stuff I loved from the 90s dates back to almost twenty years ago: we were wearing oversized Africa medallions paired with baggy jeans and black combat boots; we discovered MAC cosmetics; and supergroups such as Bell Biv Devoe, Boys II Men, En Vogue, A Tribe Called Quest, Pearl Jam and Nirvana hit it big or were just about to do so.  It was the era of the best of Spike Lee and the promise of John Singleton.  On TV shows like Beverly Hills 90210, In Living Color, and quirky prime-time dramas Northern Exposure, Law and Order, and Twin Peaks were must-see TV.  Mercifully, a few of our faves from the 80s were about to be canceled (most notably the prime-time clunker Dallas and the formulaic family sitcom The Hogan Family), but also such ground-breaking fare as the interracial day-time soap opera Generations, the young cop drama 21 Jump Street which introduced us to Johnny Depp, Head of the Class which featured Robin Givens, and thirtysomething a show that took me 20 years to finally get!

Oh, and one last thing: Bill "I feel your pain"Clinton.

So is the moral here that life was better in the 90s?  Perhaps from a certain fictional viewpoint, life was better in the 90s.  But then it also got better in the new millenium, and despite a rough start to this new decade, my hope is that if I am blessed to be able to reminisce about this era of my life, things will have been even better.  Life moves pretty fast, and sometimes you have to look back to fully appreciate where you are, to more or less paraphrase Ferris Bueller.

And so to bring us back to where we started, here is one of my favorite scenes from Boomerang:

Posted by Ayanna Damali at 1:49 PM