Staying in Your Lane and Other Holiday Observations

Today is the Friday after Thanksgiving. For some, it is the beginning of your Christmas/Holiday shopping; for others, it is the day when you travel back to the homes you left earlier this week. There are plenty of things you might be doing right now--holiday decorating, making lists and checking them twice, TV binge-watching, cleaning house, or otherwise enjoying the day. Whatever you might be doing today, I hope it does not include licking wounds from any hurt feelings you might have received yesterday.

Meaning, I pray that you did not make the mistake of doing or saying something that was unappreciated. Pretty much from now until New Year's, you need to avoid hitting the third rail of holiday gatherings by saying, seeing and doing anything offensive. Try not to be like the Hub, whom I had to drag on the Book of Faces yesterday for making the unbelievable suggestion that I substitute Sriracha for red pepper flakes in my collard greens!

(If you are reading this and maybe do not get why this was absolutely the stupidest thing he could have said, let's just say that he should have stayed in his I-didn't-grow-up-eating-greens lane.) Look boo, I know you think you done learned a little bit about soul food by watching the Neely's, Sunny Anderson, and G. Garvin, but that don't mean you know anything about cooking greens! Sitting there on the sofa making blasphemous flavoring suggestions...and then got the nerve to try and 'splain yourself by listing the ingredients of Sriracha, as if that matters. Dude!?!

See how I did that...how I went from mild-mannered wife to Busy Black Woman with an Attitude? 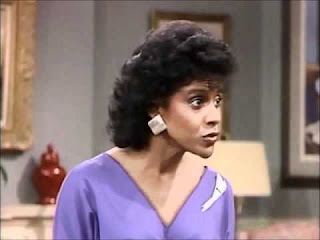 How he's lucky I found the red pepper flakes (hidden behind something in the cabinet because he still does not respect my shelf organizing system) and he only suffered some minor ribbing?

And what's funnier is that he was not the only offender yesterday. I won't name names, but some of y'all had some dry, over-cooked turkey because you let the wrong person take charge of the bird. Somebody thought they were being helpful by bringing a less-than-appetizing side dish to the table. In the words of someone else's FB post, Thanksgiving is not the time to be experimenting; yet, somebody wanted to impress the family with some new dish she saw on Pinterest. Nor is it, contrary to a rather misleading assertion from the New York Times, the opportunity to provide a "grown up version" (read alternative) of a classic dish like macaroni and cheese.

Naw folks, you don't go improvising when it comes to the most anticipated family meal of the year. Somebody's mama set the precedent eons ago by staying up all night to produce the most sumptuous meal, and daggonit in her memory, you will not mess with the formula! You will not bring a store-bought pumpkin pie. You will not substitute white sugar for brown in the yams. You will not set a vegan dish on the table and not expect to take all of that crap back home with you. You will not offer any credible excuses for why something got burned. If you don't know how to cook, just say so and bring a bottle of wine or a liter of soda.

And even if you have been savvy enough to avoid those landmines, then don't mess up by asking questions about new hair, how many tattoos, whether someone plans to get married, when did someone else finalize their divorce, who/where is the daddy, or can we watch something else other than football. Don't even discuss the election unless you know in advance that everyone at the table voted for the same candidate. Don't brag about the half-marathon you ran that morning, not bring anything, and then take home a shopping bag full of leftovers.

Too late? Did you already commit one or more of these sins? Well, lucky for you this is a holiday season that runs through January so you'll have other opportunities. You will remember next time not to wear something too new, too cute or too tight (unless you are under the age of seven). You will remember not to debate that relative who gets all of his news from the left-wing radio station. Because you aren't seven or younger, you will not wrinkle up your face while asking what is in this (instead you will scoop a small dollop onto your plate, take a taste, politely excuse yourself to go use the microwave, and then dump it in the trash). You will pace yourself, not drink too much, help clear the table, and pray that Auntie doesn't remind everyone how you were the one who brought the burnt corn bread at the last gathering.
Posted by Ayanna Damali at 5:23 PM