We hosted the Toddlersaurus's 2nd birthday party on Saturday and this year, I have no complaints. In hindsight, I accept that last year's party went about as well as could be expected and hereby rescind every negative and frustrated emotion I have attached to that event. Because I have now accepted one of the great lessons of life: Kids just want to have fun. And they will find a way to do so, regardless of the amount of money, time and effort spent.

Yet, it took another visit down the rabbit hole for me to get this. I had been so disappointed by the execution of my whimsical plans last year, so knowing that there was a second literary trip to Wonderland, I decided to revisit the theme. And for the record, I had a good plan: we had craft tables, a photo station, an interactive story time, and plans for a game of kiddie croquet. We rented a community center so that we could have adequate space for kids to move about and play, which also gave us a suitable indoor alternative in case of bad weather.

So of course, it rained. Again. Despite weather reports ALL WEEK that called for rain in the evening, not during day. So it was worth the month and a half of waiting it took for the permit request to be approved, with just two weeks to move full speed ahead. Which was just enough time for the Hub to order the food while I did everything else. However, it was not enough time to see to certain minor details, such as ordering personalized M&Ms in our theme colors to give away as favors. (For perspective, I spent two months obsessing over the same party theme last year and didn't even consider such details.)

So I improvised. Instead of personalized M&Ms, I found an unopened bag leftover from Easter. And my child, who has never had access to that much candy in her entire life, just inhaled them and ran around in circles. Which meant she never made it to the craft tables. However, several of the other kids did participate in the crafts, and none of them minded that the rose bushes I asked the Hub to draw looked nothing like the rose bushes from the Alice in Wonderland template I showed him. I won't say what they looked like before or after the party...

My photo station went unused until one little girl decided to don the Queen of Hearts cape. She also waved around a toy sceptre and proceeded to act the part of some Disney sorceress that I'm sure she's seen a thousand times, which was fantastic! But no one else ventured over to admire any of the cool props I ordered from Amazon. Or to pose with the picture frame I designed with different motifs from the story--the one that the guy at the art store got me to pay a five dollar cutting fee for a job I probably could have done myself with my old x-acto knife. Totally neglected. 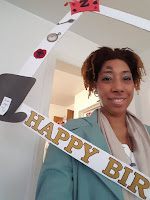 I never even got a picture of my child with any of the handmade props I designed because she never broke stride from running around in circles. And as for all of those homemade props and decorations, including the clever arrow signs? Completely unnoticed alongside the reused decorations from last year's party.

The night before the party, I was packing the trunk with the decorations and other things and left it open while I went into the house for something. I guess I took too long because when I went back to the car, some kind asshole had relieved us of the juice boxes and a case of iced tea. Right there in front the house with the front door wide open and with Hub right there in the living room. And me right there in the backyard emptying the dirty water from the cooler that I didn't use because I ran out of time to clean it. Yep.

I could keep on going but because my blissfully hyped daughter spent the entire party running around in circles, followed by an entourage of other happy, restless children including the cousin that she rarely sees, nothing else really matters. Apparently it was everybody's nap time, so those non-personalized M&Ms in the wrong colors worked like a charm to keep them awake and busy until my story lady arrived. By the time she was all set to read, everybody's sugar high had begun to wear down so they had just enough energy to barely pay attention. Of course, my child sat still for exactly 30 seconds before she wiggled herself down from my lap to the floor, where she spent the remainder of the time scavenging for more stray candy and goldfish crackers.

I guess this is why they say the best laid plans of mice and Type-A moms...because the rain never stopped (so no croquet, although it wouldn't have mattered because our balls and stakes had disappeared with the juice boxes). My grand scheme, careful attention to detail--none of it mattered. The children had a great time, as did my Dad, who has texted me at least three times to tell me so. My Mom was able to sit through all of that chaos and not get agitated. I didn't lose my temper with the Hub at all. The rec center guy was kind enough to give us an additional 15 minutes to finish cleaning. I had a great crew of friends who came to help us set up, and another great crew that helped us to clean. The Toddlersaurus received a lot of love from folks who braved the weather just to spend two hours watching a group of kids do what they do best.

As for me, back from my adventures in the rabbit hole, back from the other side of the looking-glass? I'm good. And since we keep getting bad weather, next year's theme will be from the Wizard of Oz...
Posted by Ayanna Damali at 8:36 AM