I imagine that there is/was a Jim Vance in most other major metropolitan areas--a local legendary newscaster known for his authenticity, humanity, and plain-speak. The cool guy who remained that way even as the years brought gray hair, fresher faces, and new technology; yet we continued to look for him because he was the guy we knew and trusted. 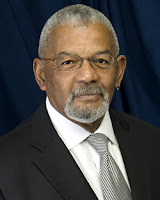 If none of those names resonates for you, that's okay. You probably aren't from DC or maybe you haven't lived here long enough to know why those names are so significant.

Having grown up in a city that most of the rest of the country does not quite understand (which is a discussion for another time), I just want to remind you that we are a distinct place with a local culture. So your congressman who lives here three days a week and then rails about how hard it is to live in Washington? Nope, he doesn't actually live here. Neither do the folks who move into the White House, so as much as we loved Barack Obama, he only just started living here after his term ended.

Because if you grew up here in DC, or if you have lived in this area for any length of time (more than say, 10 years), then you know why everyone is mourning the death of Jim Vance this past weekend.

I am not an obituary writer and I never knew the man personally, so I could not begin to write anything eloquent enough to shed any light on why his impact was so great on this little city. But I can share an anecdote that might illustrate how he endeared himself to us over the years. It was about 20 years ago that Vance served as the Master of Ceremonies for a benefit concert for my Dad and brothers' high school alma mater. He was super cool and handled the task with aplomb. He strolled to the microphone and introduced the headliner, the incomparable Phyllis Hyman (another DC favorite) and could be seen clapping and dancing along with the rest of us during the show. He served as the MC for the next several years, and we looked forward to seeing him as much as the acts, so the year he didn't MC was the last year they held the benefit.

I can tell you that whenever we saw him outside of the job, maybe on the street or at a local function, he was exactly as normal and down-to-earth as he appeared on television. A little over a year ago we saw him at the inauguration of my alma mater's new president in Atlanta, and at some point he spotted my daughter engaged in some typical one-year old toddler behavior. He seemed quite tickled by her antics, and when we saw him again at the end of the program, he offered us that reassuring smile that all veteran parents give to newbies...too bad I was too frazzled and shy to ask him to pose for a photo with us because I KNOW he would have obliged.

I have read the various tributes and accolades and I am cognizant what his passing means to our community, to his colleagues, to his family and friends, and to his profession generally. In addition to sitting behind the anchor desk for as long as I can remember, he was the last man standing from his era as many of his colleagues and peers faded from the scene due to retirements, management changes, and sadly even death. The last time DC mourned a local newscaster like this it was George Michael, Vance's very good friend who passed away a few years ago. From my recollection, Vance offered up a rather stoic on-air tribute but I remember it being classic Vance--he understood the job that he had and the tone that he need to strike in order to do what must have been the unthinkable. It was well-known that Michael had saved both Jim Vance's life and his career back in the 80s.

Those well-documented personal struggles made him even more like us in ways that perhaps we are only now coming to appreciate. His issues were never airbrushed or spun to be anything other than what they were, which is why we regarded him like that favorite uncle who doled out pearls of wisdom while cracking on his wife, right before asking her to bring him a plate. Because we knew him like that, it was no surprise that his image was chosen for inclusion among the various local faces now immortalized on the mural outside of the historic Ben's Chili Bowl uptown. How did we not think of honoring him like that before now?

Thankfully, he got to see how much his city loved him last month at the dedication of the mural. And so we say goodbye to a pioneer of local broadcast journalism, always dapper, poignant, and an all-around cool dude. Be sure to say hello to a few others that have been missed around this way: Max Robinson, Melvin Lindsey, Glenn Brenner, Tim Russert, and of course your BFF George Michael. Godspeed.
Posted by Ayanna Damali at 12:32 AM