I was not a big fan of the circus because I am allergic to animals. When I was a kid there was nothing I could take to relieve my misery, so for years I suffered through our annual family excursion to the DC Armory. I swore just two years ago that I would never go back...only to abandon that position when I was offered free tickets (and because now I have pretty good meds).

After the events of the past seven months, I am actually looking forward to going this year. I want to see my Toddlersaurus all hopped up on excitement and cotton candy, but also because I will be checking to see if there are any job openings for jugglers. Of course the competition would be stiff since every other Busy Black Woman has this same skill, officially known as multi-tasking; otherwise known as getting as much done as can be done before someone tosses in another ball/egg/meeting/knife.

I started writing this yesterday morning before I took my daughter to the circus in the evening. Initially, I was reacting to some of the typical nonsense that I encounter, but after seeing the show last night and noting that there were no juggling acts, I had to reconsider what I could actually offer a circus should I decide to make good and run off to join one day.

Since juggling is no longer a talent and obviously wild animals are not my thing (and rather politically incorrect, I might add), I think that with the right amount of conditioning, I could try contortion. Last night, I saw such unnatural body twisting that at one point, I covered my eyes...until I realized that in my efforts to accommodate the needs of so many, I often manage to twist myself into various odd and abnormal shapes.

I could also try some of the daredevil stuff. Busy Black Women have to be fearless pretty much all of the time. I have alluded to this previously, but when faced with the big decisions, somebody has to make the tough calls. To go in without backup, without a safety net, or with minimal support, especially when no one else wants the burden, so I know that I can could make performing a death-defying stunt look easy.

The modern equivalent to juggling is probably the act which featured performers suspended in air by sheets while balancing objects in their mouths. I can't even explain what they were holding, but whatever it was, it was pretty remarkable to watch how these delicate-looking objects never fell. In the Busy Black Woman context, we might compare it to balancing work and family. Imagine yourself tangled up with everything you have to do at your job while holding up your family by just the skin of your teeth. Doesn't that image reflect how life feels at times?

My daughter's favorite part of the evening was the Afro-Caribbean dancing, which seems easy enough but actually represents the hardest thing for Busy Black Women to do--to just let go and enjoy life. Dance, shake, roll, jump, and shout my sisters! For every amazing feat you successfully execute, do a happy dance. And for those stunts that do not work as intended, try again and then do your thankful dance, or just shake it off and dance. You deserve to enjoy life, even in the midst of all its craziness.


See you next year at the circus! 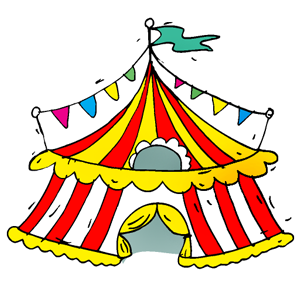