I had an epiphany this morning in the midst of an untimely Toddlersaurus eruption. And several hours later, I am thankful to her meltdown for my sparkly cool fingers and toes. As for my great awakening--I am DONE with feeling like I'm one of the worst mothers in the world. And I am done with feeling guilt that because the Hub has more patience, he is the better parent. Because that's bullshit. He is the indulgent parent, and this morning before I left him at home with a half naked child who should have been on her way to dance class, I told him as much. Because if she climbs up on my television set one more time...

This morning began with me doing dishes, making coffee, setting out her breakfast, fixing her snack, and then getting myself ready to dash out of the house to take the kid to her "dance class" (which is really just a movement class where I get to dress her up in a tutu and watch her run around for 40 minutes). The Hub was working from home today. So as I was busy in the kitchen, they were in the living room together--he at his computer and she at her table. I announced to both of them that we needed to get ready for dance class after I finished up in the kitchen. Which was the first mistake I made, but we will revisit that a little later.

Fast forward to the point when we had only a 15 minute window to get her dressed and strapped in the car to leave, and I had to call downstairs for a second time for her to come up to her room. The Hub carried her upstairs, then she hurled herself onto the floor while he was standing in the doorway asking her to calm down. Of course because Mommy was already annoyed that we were behind on time, I barrel into her room to tell her that we need to change her clothes for dance. Her response was to bite into her pajamas and collapse into a pile of clothes in her closet. You get where this is going...

In response, I told her that if she refused to get dressed, then we would not go to dance class. Then I turned to the Hub to add that I could go to the nail salon instead. She calmed down a little so I ask him (who was still watching from the doorway) to hand me her special light up shoes that matched her tutu. But she got a second wind and began to kick me, so I declared that we would not be going to dance class today, nor would she be allowed to watch any of her favorite TV shows. And then I went downstairs to gather my things. I can't recall how she ended up downstairs with me, but she noticed that I had made good on half of my threat, so she began to moan the name of her favorite show and then climbed onto the TV. 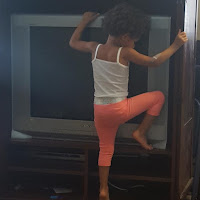 Then the Hub came downstairs with her tutu and her special shoes. She was still screaming at the top of her lungs and had worked herself into a frenzy. He intercepted one of her trips from the living room to the kitchen with a pacifier, and the next thing I heard were pleas to allow him to dress her so that he could take her to dance.

I was livid. The color I chose for my hands was called Cosmo with a Twist.

Veteran parents who are reading this have already noted the various tactical errors that were made. We ran short on time, I was rushing, I interrupted her favorite show, and once the decision was made that she would not go to dance class the rest of the nonsense was just feeding the flames of her inferno. But this was not just about me because the Hub knew from my initial announcement that there needed to be some sense of urgency about getting her ready to leave; yet, he made NO effort to assist me until the very last minute. And then to turn around and suggest that after all of that drama, she should still be allowed to go...yeah he's lucky that I only went to get my nails done today.

I have been struggling with epic Toddlersaurus behavior BY MYSELF for weeks. I wrote about spanking her in public for the first time last month, but then came last week, and dear God I lost count. I have been googling, praying, and asking for insight from others and I keep getting, she's two, as if somehow that excuses everything. But then the beginning of my breakthrough occurred this weekend.

First, I found out that the Niece had received a severe punishment for misbehavior at school. I found out at the last minute which impacted plans I had made for the weekend, but then I spoke to my brother. And hey, I'm not entitled to keep my plans with a child that isn't mine. Second, I had a text exchange with my college BFF after I spent a good part of Saturday night pissed about cleaning up the living room from all of my daughter's scattered toys. I expressed my frustration that the Hub NEVER cleans up after her, nor does he make her clean up after herself. She offered a few suggestions, but then asked me what consequences did we impose on her for not behaving. And it dawned on me that I know how I have tried to discipline her, but can't say what his definition would be. Third, we had a very emotional experience in church involving another person's child. All was happily resolved by the evening, but the stress and trauma of that made me assess a few things. Particularly because my daughter is two, but God willing one day she will be 16. Finally, on Sunday I went to get her from the church nursery and this child was putting away the toys! What??!!!

I love this girl with my entire heart. God knows I do, but I am not her friend. She won't be at home with me forever. She has to venture out into this world, and no one is going to accept excuses for why she doesn't listen to instructions, clean up after herself, or why she loses her mind when told that she can't have or do something. In real life outside of this house, her antics are not cute.

Before leaving this morning for the nail salon, I confronted the Hub with my concerns about how he undermined my effort at imposing consequences for bad behavior, and he didn't quite get my point. So I left; thus, the consequence of not listening to my point of view or failing to recognize how he enables her insanity was for me to leave her with him today. Or to drop her off at his office the week before last, or to have her scream for 20 minutes straight about ice cream that I forbade her to have. And he had to work late, which serves him right.

Look, I'm not vindictive, but I refuse to treat the two year old who is just starting to talk like she has equal rights. I might lose my fair share of battles over lots of little things, but this is not one I plan to concede.
Posted by Ayanna Damali at 11:13 PM