(In the modern age, the equivalent of "the dog ate my homework" is "I forgot to save my file" so this is an attempted rewrite of what was much funnier last night. It may be only slightly funny several hours later.)

Halloween is one of my favorite times of year, right before everything gets super hectic and stressful in preparation for my least favorite time of year (Christmas). And over the years, I have come to love this holiday as the symbol of everything I love about Autumn. I love going to the pumpkin patch. I love picking apples. I love seeing children in costume. I love passing out candy. I love making chili and drinking beer. I love wearing sweatshirts and long sleeves and jeans and boots!

I could go on, but you are reading this to learn about all the things I don't like about this time of year, such as:

1. Sanctimonious religious folks who rail against the pagan origins of the holiday. A few years ago, we took my young cousin trick or treating in our neighborhood, and someone had posted a note on their door about how they were Christians, and as such they didn't celebrate Halloween. And then the note went on to quote several Bible verses and honestly, I kinda wished that I had brought along a carton of eggs...

Because seriously, there is no reason to proselytize by shaming people and their children who just want a few pieces of candy. Just keep your light off. Problem solved.

2. Teenagers who "chaperone" younger kids and expect candy. So that was me, about 20+ years ago, so I am not really in a position to judge. Except, I am judging all 6'4" of you, as you stand there without a costume or even a clever tee shirt. I bet you don't even know these kids. And yes, I saw you push past the smallest kid to thrust that old plastic grocery bag you found in the street in my face. So no, I don't believe that you have a sick sister who isn't with you, and you only get one piece.

3. Houses that have decorations but don't give out candy. For years, one of my neighbors put out plastic jack-o-lanterns on her porch for several days leading up to Halloween, which then mysteriously disappeared the day of and it always left me scratching my head. If you want to decorate for the season and not distribute candy, just put some mums on the porch and call it a night.

4. Trick-or-treating past 9pm. Again, I was guilty of that 20+ years ago, but when you know better, you do better. Halloween is always on the same night folks, which means it is usually on a weeknight. I know it doesn't have established hours, but I would say that a good two hours, from 6 to 8 is just about right. That way the kiddies can get home before too late, it isn't too cold out, and the hipsters can head out to the adult festivities. And I can get down to eating my chili and sorting through whatever the Toddlersaurus won't need to eat.

5. People who drive in from the suburbs to the city with their children. I see you idling in the car with those out of state tags. I thought the reason why you moved out there was to get away from us city folks, so what's up with that? Y'all living in McMansions and driving Escalades...I know someone in your cul-de-sac went to the Costco and bought that same big ass bag of candy I bought. Don't those mega churches out there host Trunk or Treat in those massive parking lots?

6. Howl-o-Ween. I am allergic to every animal except goldfish, but since it would be stupid to put a costume on my theoretical pet goldfish, please tell me why this is okay? 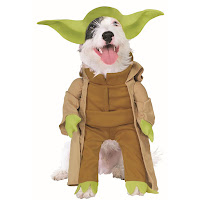 7. The parent who wrote this letter. We all sympathize with those of you dealing with food allergies, and I can only imagine how much of a hassle it is to essentially throw out most of your kid's candy haul. But this passive aggressive mean Mom isht is NOT the move.

8. The folks who give lame treats. Like my Dad, who for years gave out Peppermint Patties and Mounds bars. Or his mother (my Grandmother) who was a dental hygienist and gave apples until the drama about razor blades, and then she just kept the lights off. Now, because of the real struggles faced by parents dealing with food allergies (see #7) and various dietary restrictions, it's hard to know what to distribute. Those kitschy doodads are okay, but I'm not all that excited about traipsing around the neighborhood for novelty eyeball erasers, pencils, and plastic vampire teeth. And NOBODY wants candy corn or peppermints.

Will kids take money? I am willing to lobby Congress to keep pennies in circulation for just this purpose.

9. These ultra PC cultural appropriation arguments on children's costumes. I'm going to defer addressing this issue here until after Halloween, but let's agree that children who want to dress as a specific character should generally be allowed to dress as that character. However, if you are voting age on a college campus at a fraternity/sorority party, none of your attempts at mocking entire cultures are cool (and no one cares that you are 18 and drunk...that isht ain't never clever).

And for the life of me, why y'all gotta go out and re-imagine Wonderland as a strip club  (ok, forget I asked, lol)?

Seriously, PUT ON SOME DAMN CLOTHES! It is late October. Children are outchere in these streets. Underwear is not a suggestion, but a requirement. And how do you walk around in those heels without spraining ankles? #inquiringmindswannaknow

And it's almost midnight, so I will check in again with some Wednesday Fried Chicken to debrief about what I saw tomorrow (later). Happy Halloween my Busy Friends!
Posted by Ayanna Damali at 11:52 PM