Four Golden Girlfriends Living the Single Life in the City

It was last week that we marked the 20th anniversary of the debut of the Sex and the City franchise, which is a pretty big deal (especially when you let it sink in that is has been 20 years). The show was a cultural phenomenon during its six-year run on HBO and led to two reunion movies, several next-generation shows, and brought high fashion brand names to the mainstream such as Birkin, Manolo Blahnik, and Jimmy Choo. 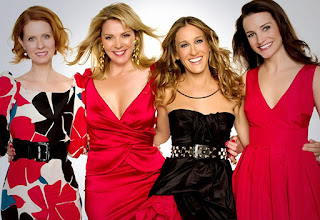 If you are of a certain age, you might be tempted to consider SATC a pioneer of the "girlfriend show" genre...and you would be wrong. I am of a different certain age and by my estimation, the girlfriend show dates back to at least the second season of The Facts of Life, if not earlier. While the first season featured a rather large cast of boarding school girls, by the second season that group got whittled down to four girls for the remainder of its run. I became reacquainted with this classic show during those early days of my daughter's life when I was awake at ungodly hours. Watching TFOL again was absolutely like catching up with an old friend.

Which is exactly the point of the girlfriend show. We are supposed to feel a kinship with four women from different backgrounds who are thrust together by sitcom scenarios such as four girls serving kitchen duty at an upstate New York boarding school. Or four mature women who are semi-retired and living in Miami. Or four career women who live in the city (pick a city, any city). Sometimes there is a slight change to the formula where there might be three friends or a trio of sisters (as was the case for Friends and Charmed). And sometimes the tweak is to center on two friends/sisters and then have the others rotate in and out of the story as necessary (as in Insecure and Half and Half).

While it is tempting to regard the girlfriend show as the female counterpart to the buddy show, it is not that simple. Buddy shows don't follow the set formula of having a certain number of friends (male or female), they rarely delve into the characters for any back story or depth, and at least one of the characters functions as a cartoon foil to the others. Consider how it took six seasons to learn that Kramer's first name was Cosmo (Seinfeld), or that it was a running joke that no one knew what type of job Tommy held (Martin). Buddy shows rely on situational gags for laughs, so that's fat jokes (What's Happening), fart jokes (South Park), and sex jokes. As a rule girlfriend shows rely on the relationships of the friends to drive the humor. That's why I would categorize Will & Grace as a girlfriend show even though it could probably be mistaken for a buddy show in drag.

SATC took the girlfriend show format and tried, for a brief moment, to infuse it with buddy show elements...but that barely lasted through the end of the first season. It was clear once they tried a fart gag, but then spent time discussing it, that there had to be more to these four women than just bed-hopping and brunch. The fact that the show aired on HBO gave the writers license to be more explicit and to use profanity, which paved the way for that same gimmick on shows like Girls and Insecure. Cursing and nudity aside, those shows still rely more on the relationships of the women to each other than to the various men who wandered in and out of their circle. 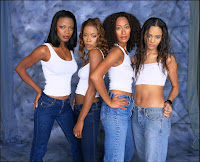 The idealistic portrayal of women's friendships could be deceiving since there was rarely any conflict among the characters that lasted for more than two very special episodes. Real friendships among women in a group dynamic are a lot more complicated. For example, very few women would trust a Blanche Devereaux, Toni Childs, or a Samantha Jones in their sister circle. While we might appreciate the wisdom of a Dorothy Zbornak or a Khadijah James, we would tire of their sanctimoniousness. Blair Warner and Regine Hunter probably would be BFFs if there could be a crossover in the space-time continuum (which actually was a joke on Living Single). While Rose Nyland and Sinclaire James might have been separated at birth, Maxine Shaw and Miranda Hobbs would have been frenemies. Which is the another element of the classic girlfriend show--the characters are practically interchangeable.

This weekend, there was a marathon of every SATC episode and after watching a few, I definitely agree that the show is worth acknowledging. There were topics addressed on that show that are standard for girlfriend shows such as sibling rivalry, death, chronic illness, marriage and divorce, job loss, and of course, relationships with men. I think that the twist it offered to the genre was its focus on these issues from the viewpoint of a character/narrator who shared her observations about life as it happened to her and her circle. It also took the time to develop the relationships among the friends beyond the two-dimensions of the usual sitcom, so we watched the characters change and evolve and could relate to their struggles and triumphs.

Thus it might be more accurate to suggest that SATC pioneered a more modern twist to the girlfriend show...one that owes a debt to quite a few of the shows that came before it and also to changing attitudes about the depiction of women on screen. Sex and the City was possible because of those very special episodes of The Facts of Life; because an upstart TV network took a gamble on four black women Living Single in Brooklyn (and then three Friends doing the same in Manhattan); and also because four women of mature years dished about sex while eating cheesecake on The Golden Girls. Twenty years later as women are still trying to navigate careers, family, and relationships, we know that we can count on our friends. (And I swear I didn't want to end on such a cliche, but it's true :)