Two years ago when the news was announced, I recall that I was in the midst of doing Mommy stuff and also that I was writing another piece about Harriet Tubman on the twenty dollar bill, so I never really wrote a sufficient tribute to Prince. And in the time since, I've felt as if I couldn't truly write the type of tribute that wouldn't seem like something I should have written in the moment (although looking back, I did better than I thought I had). But still...how can I fix that?

Well, I admit that one of the reasons why I didn't write the Prince tribute was my disbelief that the Artist Formerly Known as Prince had actually died. I know that he's physically gone, but there have been all of these signs that his transition was not what we are accustomed to experiencing--yes, we had to process the untimely death of an iconic figure. Yes, there was the tabloid nature of all the details and drama. Yes, I was shocked and definitely felt some kind of way when I sat through the first all-day marathon of music videos. But after the initial shock wore off, we comforted ourselves by wearing purple, by attending dance parties, and by speculating about the rain that lasted for three weeks straight. There were awards show tributes. There were reunion tours announced. There were clever memes of Prince giving us eternal shade. Somehow, we collectively chose to celebrate his life with such creativity and enthusiasm that I'm convinced almost none of us have mourned the way fans are supposed to. 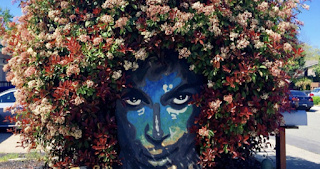 Mind you, I was not a casual Prince fan. I liked Prince until two of my friends from middle school showed me a scrapbook that they had created and then I loved him...and then I became obsessed. And while that obsession waned a bit during my high school hip hop phase, it revved up again in college and lasted through law school until I shifted towards neo soul. And like most people my age who had favorite artists and evolving musical taste throughout the years, I could return to Prince as if I had never switched from LPs to tapes to CDs. I should have been devastated...

Instead, I've contemplated how to frame this tribute, which I started to write back in April for the anniversary of his death, but is definitely more appropriate now for his 60th birthday. It's impossible to fully articulate Prince without falling victim to cliched pronouncements, such as his music was the soundtrack of my teenage rebellion and sexual coming of age. I could write about his artistic genius, but I am not a music critic. I could celebrate him as a consummate performer, but I only got to see him perform live once (I know). And then I thought I could offer my tribute via a playlist of my top ten, twenty, thirty, forty...fifty favorite songs, but that could take 17 Days (ha).

So I find myself back where I was two years ago--completely overwhelmed by the daunting task of trying to put a concrete box around an abstract concept. Which is why I've come to accept that I don't need to put that much pressure on myself. Prince wrote his own tribute.

What I can do is make my top ten recommendations for the casual fan or neophyte:

Posted by Ayanna Damali at 9:12 AM