Let's Try to Be Civil

It would be nice if we could, in the words of the late Rodney King, "all just get along"...but we can't. Not because we haven't tried, but primarily because we all adhere to different standards when it comes what getting along actually means. For some, it means that we treat others how we wish to be treated. For others, it means that we treat them how we think they ought to be treated. So we end up with incidents like the one that occurred last month at a New York City eatery: 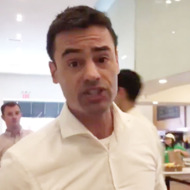 Which brings us to the last news cycle's outrage (actually, we might be two or three cycles removed by now thanks to the Supreme Court) over statements made by Rep. Maxine Waters at a rally where she encouraged people to harass Administration officials in public spaces. For the record, I disagree with her, but I'm not taking the bait when it comes to condemning her statements. What she advocates is silly because nobody has time to be following members of this Administration around the city in their off hours. Folks have lives to lead and more important things to protest. Last I checked, Westboro Baptist Church is in Kansas.

But let's be clear that the officials in this Administration are complicit in ruining the lives of many people, so if Sarah Huckabee Sanders and Kirstjen Nielsen can't eat at particular local restaurants because the patrons/owners/workers disagree with the inhumane policies they defend, well then that's unfortunate. It's difficult for me to find that much sympathy for them; yet, I recognize that if I celebrate how they were treated, then I need to be prepared for the inevitable backlash. Which I am, but I refuse to join the chorus of folks who insist that Maxine Waters owes anyone an apology.

Civility is a nice word that implies two people can approach each other with divergent points of view and then walk away with the warm and fuzzies. Civility is how Sarah Huckabee Sanders was treated when she was asked to leave the restaurant last week (and then had her meal comped). Civility is how all of our past living Presidents interact with each other. Civility is why some parents have to meet at McDonald's to facilitate weekend visitation. Civility is the lesson of the Hamilton-Burr duel. Civility is why there are lawyers. Civility is what this President urged when two groups of protesters were gathered in Charlottesville last summer--just as someone was plowing a car into Heather Heyer, killing her.

Yeah. Civility is what Chief Justice Roger B. Taney denied to black people in 1857 via the Dred Scott decision. Civility is the opposite of how the women who marched for suffrage in 1913 were treated by the jeering and taunting crowds. Civility is not the objective served by signs like this that enforced segregation in public accommodations and education. Now, if these examples are too dated, then how about this incident during the State of the Union address in 2009. Or this example during a campaign rally. Or this tweet written by this President directed to Rep. Waters the other day.

Of course, he continued that line of attack (and lied about what she said), while the Speaker of the House demanded an apology, another colleague called for her resignation, and a fringe trio of protestors showed up at her house. So spare us the faux outrage. Keep your false equivalencies to segregated restaurants because the issue is not really about discrimination, unless we're talking about Latino or Muslim immigrants.