In less than a week, the current President of the United States has managed to disrupt NATO, insult German Chancellor Angela Merkel and British Prime Minister Theresa May, and I'm betting that by the evening news, he will have found a way to disparage Queen Elizabeth II. Are there any more powerful women in Europe left for him to offend?

Well, while you think about that, consider this: My initial intention was to post a mini rant to the Facebook page to juxtapose photos of him with world leaders to renderings of him in balloon form:

I thought it would be a funny joke to end with a reference to the iconic Jack Nicholson's Joker where he complains about Batman stealing his balloons (by the way, I was mildly obsessed with this movie, so of course I recall random stuff like this):

Then something a bit ironic dawned on me--this is also the scene where the Joker has commandeered the Gotham City Centennial Celebration (which had been cancelled because of his terrorism) and promises to give away a million dollars to the crowd prior to staging a public duel with Batman. 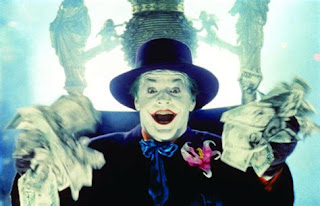 He then gives a rousing speech where he calls everyone a schmuck right before he unleashes poison gas on the crowd via parade balloons.

I am not the first person to compare this President to the Joker. Apparently, Trevor Noah has already done so and Mark Hamill, who voiced the cartoon version throughout the 90s, has revived that character while reading the President's tweets. We were barely two weeks into his Administration when this characterization emerged, and just now another opinion writer invoked Heath Ledger's Joker as an avatar for our times. So it isn't just me, although I might be unique in seeing some eerie parallels between the Tim Burton movie and the present day.

Just this week: he sabotages an important occasion (check, his remarks at the NATO meeting); crowds have taken to the streets (check, in the form of London protestors); he's unleashing poison into the air (check, in the form of regularly gas-lighting the media); and at his side is a beautiful, speechless, barely functioning travel companion (check, because if Melania Antoinette isn't Alicia...) 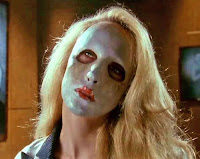 The Hub swears that these references are lost on anyone but die-hard Batman fans of a certain age. And if that's true, then I urge you to watch the movie (which is better than the darker Chris Nolan film, IMHO).

I also end with my initial rant, which was to lament how American women aren't the only ones to be accosted by this President's special brand of patronizing sexism. So far it looks like he minded his manners with the Queen, but it's still early...
Posted by Ayanna Damali at 1:18 PM