Perhaps it is appropriate that on this Independence Day, my soul is not at ease. In the past week, so much has happened to put me in a space of turmoil--such that I haven't felt since 2am on the morning of November 9, 2016.

At that precise moment, I woke up from a restless sleep. My daughter and I had spent most of Election Day with my parents, then we went to hang out with a friend where we had hoped to celebrate the election returns. Of course, by 9pm when it was well past the kid's bedtime, we were staring in disbelief as states were being declared too close to call or worse. Even when the Hub called with obvious worry and concern in his voice, I was still guardedly optimistic. The kid went to sleep, and maybe it was exhaustion that allowed my mind to quiet down just enough to fall asleep for a few hours until I heard the announcement over the radio.

At 2am on the morning of November 9, the ground shifted. I hugged my child and somehow went back to sleep for a few more hours, but by the next day I felt defiant enough to write this. And then a few days later I felt introspective so I wrote this, but then in another few days I was angry and distraught and wrote this. Y'all, I never intended to write much political commentary on this blog, but ever since November 9...

By the time it was Independence Day last year, folks had marched in the streets by the millions all over the world and there was still hope that we could weather this storm if we just kept up our momentum to resist. There was already a revolving door of high profile firings and departures from this Reality Show Titanic. We were encouraged and woke and quoting Frederick Douglass. But then there was Charlottesville and Puerto Rico and the NFL and...

A year later, I'm tired. My contempt for this Administration intensifies with every new disaster, every new policy announcement, every new depravity. In two years this man has been the human equivalent of an aggressive cancer.

I am trying to maintain my sanity and my health in a toxic environment where stronger people have already been taken out. I am trying to remember what we are supposed to be celebrating today while children are sleeping in cages. I am trying to be optimistic about the future as we await the announcement on Monday that will determine how much harder we will have to fight for justice over the next 30 years. Last week I was chastising folks to stop lamenting the end of the world. Today I am in my bed with the covers over my head. I should be getting dressed for a barbecue somewhere...sharing laughs about who is violating the BBQ Commandments or who brought the raisins. Instead, I don't want to leave the house. I just want to eat bacon and shop on Amazon.

I know that the goal of this relentless assault on everything is to kill us. Not merely punish or tame or demoralize, but to kill us dead. That isn't hyperbole. That's what ego-maniacal despots do--Hitler killed 6 million Jews, Stalin killed millions, as did Genghis Khan, Pol Pot, Francisco Franco, and now Bashar al-Assad. How many people have already died in mass shootings, in hurricanes, of broken hearts and destroyed dreams since November 2016?

Of course, as I write this and think about real loss and destruction and catastrophe, I am reminded that this is the price of the values we espouse. People died so that others might live. People have gone through much worse and survived. Freedom requires sacrifice and constant struggle. Reflecting back on how painful it was to face a new normal on November 9, I knew it could get this bad. I knew that a whole lot of us found out that checkers and chess can be played on the same board, but they are not the same game. But we can still mount a challenge to the king, even as a ragtag army of pawns. We did it once before, 242 years ago (and several times after that).

I can waste today feeling sad and despondent over how much ground we've lost, or I can plant some seeds in the ground that we still have (no matter how small the plot). 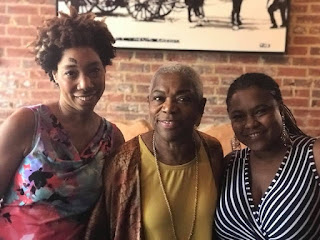 Posted by Ayanna Damali at 3:24 PM