All Hail The Queen

Today is one of those days that we know will come, but when it does, our shock and sadness still catches us completely off-guard. I was in the middle of posting a Facebook post about Madonna (whose birthday is today), and had just posted a birthday shout-out to Angela Bassett minutes earlier (also celebrating a birthday today). I walked away from the computer for just a minute while You Tube was playing Madonna videos when the news was announced.

And now I am frozen. I missed an appointment. I need to be doing the dishes, the laundry, preparing for the kid's first day of school, taking a shower...any number of other pressing tasks, but this news and this transition at this moment in time. 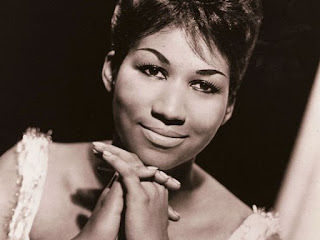 I am going to ramble, so please indulge me a bit as I try to find the right combination of words to pay tribute to a woman whose music has been a part of my life since the very beginning. And actually, can I say that without it reading like a cliche? But seriously, are there any other artists like her who have been just that significant?

Obituary writers are prepared for these moments, and I assume that the spontaneous TV tributes that I watched all morning had been planned since the news broke earlier this week that Franklin was "gravely ill" and under hospice care. If I were a more disciplined writer, I would have already had a list of songs and would have written parts of this in advance so that it wouldn't be so random. But I just didn't want to think about what would happen once she made her transition; thus, this is just another example of how I must do everything the hard way.

Earlier when I was posting my Madonna birthday shout-out, I was stuck on deciding which video to post. I could tell you that is the same dilemma I faced putting this together. Because there isn't just definitive one song. There are too many--too many great ones, too many iconic ones, too many popular ones. So I will begin with what I posted on my personal Facebook page when I first heard the news, the footage of her singing My Country Tis of Thee at Barack Obama's 2009 Inauguration because I've been seeing that all week. Last night before I went to bed, Lawrence O'Donnell ended his program with that clip in tribute to her, and I think it is an excellent starting point for acknowledging her status as a true American icon.

Here is another live performance for the Obamas where she pays tribute to another great American icon, Carole King, at the Kennedy Center Honors. Aretha sings Natural Woman, a song King wrote and that they both recorded, but well...(and yes, I was crying too Mr. President).

And while I can state that Phoebe Snow did an admirable job and Boys II Men did the 90s thing, the theme song to one of my favorite TV shows, A Different World, belonged to Aretha. Ironically, her second husband, Glynn Turman, portrayed Colonel Taylor, whose character was introduced the second season when she sang the theme.

Aretha's only official acting credit was in this 1980 Blues Brothers movie, which I have never seen (but everybody knows that scene). She made another cameo in the second Blues Brothers 2000 movie, also that I never saw, so I'm not posting that clip because there are much better performances to share.

Music videos were the new big thing in the 1980s, and here is one of her offerings from that era, Freeway of Love. I actually searched for Pink Cadillac (which was sung by the late, great Natalie Cole). Same car tho.

It should be noted that Aretha made a cameo in How Will I Know (at 4:00), another video from the same era by another late, great diva. Somehow I forgot they did a duet It Isn't, It Wasn't, It Ain't Never Gonna Be (not hard to see how we forgot about it though). A few years ago, Aretha paid tribute to Whitney in this live performance.

I was a kid in the 80s and didn't realize that was her comeback decade because this clip here is from one of her many appearances on Soul Train. When this clip reappeared on social media recently, we were all tickled that she was so...free. And I had to include this performance of Rock Steady because you realize how big you have to be to have your name replace the Soul Train banner???

You also have to be kind of a big deal to be mentioned in a random ass song that no one remembers the name of (I just typed in "Da Ha Ha Ha, Da Ha Ha Ha Ha Ha"), formerly titled the Rappin' Duke (skip ahead to 3:09).

The 80s were also notable for big collaborations, but Aretha was not featured in any of the notable ones. I guess that comes with the territory of being a diva. She did record this duet with Annie Lennox, which was literally the feminist anthem of the 80s. And speaking of feminist anthems, here is another, A Rose is Still a Rose from the 90s, produced by Lauryn Hill.

This isn't a performance, just a series of appearances Aretha made on Oprah, because Queens have no problem bowing down to each other.

And she had no problem with delivering an outstanding show outside of her designated genre. Remember when she was supposed to perform a duel with Luciano Pavarotti at the Grammy's in 1998? He backed out at the last minute so she sang it solo, and then again for the Pope in 2015.

Of course, she was at home in the church, and like all great church singers, she never forgot those roots. She recorded Amazing Grace in 1972 and performed Precious Lord for Mahalia Jackson's funeral in 1972 (here is the full song). Here is an outtake of her singing He Looked Beyond My Faults.

Her gospel roots are unmistakable in these two great movie soundtrack performances from the 90s: Someday We'll All Be Free and It Hurts Like Hell, neither of which were gospel songs, but I guess nobody told her and I'm not at all mad.

I did not know that the soundtrack to the movie Sparkle was an Aretha Franklin album, but we all know her version of Something He Can Feel, which is the only Aretha song that another group could remake (En Vogue) that actually stands on par with hers. For the record they were a group, and she sings on their version too.

I could not choose one song from the classic era of her hits that earned her the title of Queen, so I chose three (live performances): Chain of Fools, Do Right Woman, and Never Loved a Man (and now I bet you are looking for some brown liquor after hearing these).

And now we come to the iconic Aretha Franklin song, otherwise known as R-E-S-P-E-C-T (written and recorded by Otis Redding first), but as we already know, this is now and forever will be her song. Here is a live performance from 1967 and here is the more familiar original recording.

There are so many other songs that I didn't include, but this is not meant to be an exhaustive retrospective, just my hasty Busy Black tribute to an American icon. Rest well, Queen (and Whitney, go on and give Auntie Ree the next few heavenly solos).
Posted by Ayanna Damali at 6:03 PM