I have more to say about the passing of Aretha Franklin.

Unlike Whitney Houston, whose career I followed from beginning to end (because I was alive during its entire span), I acquired my appreciation for Aretha. But not from my parents, because I do not have memories of them being great fans of hers (like I do with Stevie Wonder, for example). I came to this love for her on my own as a young law school student back when we were all members of the Columbia House music club. I was going through a discovery period of "classic" artists and bought this: 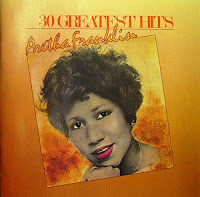 Because for me at that time, Aretha Franklin music was whatever she had been releasing in the 80s, during her so-called comeback era. I knew that there existed this earlier period of greatness that had designated her as music royalty, so I wanted to acquaint myself to that music, the stuff that got played in the basements on Saturday nights on the oldies radio station.

Of course, I was not disappointed.

Right as the news broke of Franklin's passing, I was looking through a sampling of Madonna music to highlight for her 60th birthday. That search was based on her catalog of videos from that early period of her career in the 80s when she was being called the "Queen of Pop". While there is no denying Madonna's star quality and endurance as an icon in her own right, there is a clear distinction between a music video star and an all-around musician and artist. Aretha is, was, and always shall be...(yes, that song is stuck in my head now) The Queen.

In one of my first published online pieces, I questioned whether music (R&B specifically) had lost its soul. That was in 2001 when the video for Lady Marmalade had been released for the film, Moulin Rouge. It's ironic that I thought of that piece, but it contemplates this exact moment in time--the vacuum created by loss of a great artist in comparison to how greatness is defined by modern tastes. How most popular singers of this current era are better known for record sales and provocative award show performances, but it is uncertain whether any of them will be remembered for their music. How many of these singers will be able to rely on their 40 year old hit records when they are long past the age of being able to dance to the original choreography on stage? How many of us who came of age on hip hop or heavy metal are willing to pay good money to see those old heads perform a cover of someone else's music from a different genre (other than Aerosmith and Run-DMC)? In the future, who will be the recipient of a Kennedy Center tribute that brings the Leader of the Free World to tears?

That is the magnitude of the loss of an artist like Aretha Franklin.

And that's why we can't just give away titles to folks on the basis of record sales and concert bookings. Greatness requires more than good looks and media savvy. Greatness is more than the ability to reinvent one's career as popular music tastes shift. Greatness isn't always long-lived, but it is about the quality of the output. Greatness is a heavy burden that exacts an expensive toll.

Aretha Franklin was crowned the Queen of Soul in a 1964 ceremony contrived by a local Chicago radio deejay before her true greatness was even realized. It is safe to say that by the time she was recording the album that would mark her "comeback", she had put in much of the work that gave that title its value. Work in the form of the eight albums she recorded before she switched record labels in 1966, and then in the form of the tremendous output of 1967 to 1976, which would be known as her golden era. She had been a teenage mother, had two marriages, and had weathered various family tragedies, including the death of her beloved father. She had already been a working artist at Arista by the time Whitney was signed.

This is not a dig at other performers, but simply a recognition that Aretha's talent surpassed all of what we would use to define greatness in music today. That's the reason why there have been serious debates on social media about who should be included in a tribute...

(I had been working on this piece off and on since the weekend, and last night I decided to go to bed. I was feeling blocked and uninspired, so the kid and I tucked in to watch TV. I tuned into the VMAs for maybe a minute, and I wasn't following social media, so I had NO IDEA. And I won't even dignify that nonsense except to suggest that it proves my point.)

Aretha was great.
Posted by Ayanna Damali at 8:38 AM