On Sunday, I took the kid with me to Target in an effort to wear her out by bedtime. I knew the risks of taking an overly stimulated child who hadn't napped all day to a crowded big box retailer on a Sunday evening when apparently everybody else had the same idea, so I made a trip to the toy aisle in order to keep things calm. I had no intention of buying anything, but the kid (who now has a clear understanding of wanting things on store shelves), made her way to the doll section and reached for a Barbie. It was a Black Barbie, and while she was searching for a button that would make it sing or talk, I happened to see these:

And they made me smile. My daughter and her peers have so many options that were unavailable to previous generations of young girls, and I commend mainstream toy companies for finally realizing that children of color deserve to see themselves reflected in characters and merchandise. We've been saying this for so long, but diverse representation matters. It is phenomenal that little black and brown and Asian girls get to see representations of themselves, just as it is equally important for little white girls to see their peers. From Doc McStuffins to Mulan to Moana to Tiana to Jasmine and even that fairer-skinned Pocahantas (yeah, I noticed), Disney has made great strides in offering diversity. Mattel has done the same thing with Barbie, and while there isn't a classic movie catalog or a theme park to reinforce these images, who would have thought that Barbie would ever rock a fro? 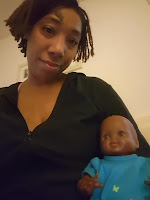 Let's be clear, these companies have made these dolls to attract our business. They know that if they do not offer us dolls that look like our children, our dollars will go elsewhere. My parents never bought me a Barbie doll because she was white (remember, it was the 70s and I have an African name) so they were very intentional about those types of things. By the time black Barbies became a thing, I was no longer interested and the one Barbie that slipped through the cracks ended up with an asymmetrical hairdo. Here is the black Zuri doll I had as a child, sold by Shindana, a black toy company that operated in the 70s and 80s (and yes, my daughter is named for her).

In turn, I have been very intentional about the dolls I have purchased for her and my nieces. Disney's Princess Tiana debuted the year my niece was born, so naturally I bought one for her. This past Christmas, I bought my other niece the black doll from the preschool American Girl line and bought my daughter a black doll from the toddler American Girl line. I expected to wait a few years before investing in the next level doll, but guess what my daughter will receive at some point whether she asks for one or not (because how can I possibly not buy her the Latina astronaut doll of the year)?

So yes, I'm all in and spending big bucks and praying that my child doesn't get creative with a permanent marker or a pair of scissors one day.

Representation doesn't just matter with respect to toys. This Sunday while we were all watching Black Girls Rock 2018, the revamped Miss America contest debuted and crowned a black woman named Nia from New York. There have been black Miss Americas for a while now, but I am old enough to remember when Vanessa Williams made history. While we have all been debating whether Serena Williams was the victim of sexism or of her own bad temper, I remember a time before the Williams sisters dominated the game. They are now old enough to be beaten by younger players who grew up with them as role models. In a few weeks, there will be a lot of little Black Panthers on your doorstep. As some are questioning the existence of black mermaids, I am already prepared to purchase everything Zendaya once that live-action movie is released.

Yeah, my kid also loves Anna, Elsa, Cinderella, Rapunzel, and those chicks from Descendants, along with Harley from Stuck in the Middle, Andi from Andi Mack, and Zuri (of course) from Bunk'd. She loves Abby Cadabby, who is a pink fairy monster on Sesame Street, Pinkalicious, and Pinky Dinky Doo (yes, I just caught onto the pink theme). She loves Miss Elaina and Katerina from Daniel Tiger, Peg from Peg+Cat, and JoJo Siwa. How ironic that my very strong-willed and determined child identifies with other very strong female characters, regardless of race or species. (Mind you, our limited universe of fictional female characters consisted of Miss Piggy, Lady Elaine Fairchild, Wonder Woman, and one Smurfette.)

Finally, this topic has really hit home for me as I look around and see all of the women who have emerged on the political landscape as candidates and leaders, as commentators and analysts, and as activists and advocates. Last week I saw how a woman my age with my name running for Congress with this very same message won a primary election against the odds. It matters when women are in positions of power. It matters when women speak truth to power. It matters that women are bringing folding chairs with them to demand room at the table.