The Birth of a Radical

Today marks one of those solemn anniversaries that we must commemorate, even as some would prefer that we allow it to fade. When I say some I mean those who say that these memories are too painful, that exposing them to such pain is unfair. The some who wince and whine "that was so long ago" or "why dredge up the past when we've come so far"...

Those same some who blame victims who die under suspicious circumstances. 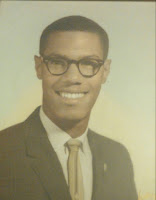 Nevertheless, today is my Dad's 71st birthday. Fifty-five years ago, on his 16th birthday, an act of domestic terrorism occurred at the Sixteenth Street Baptist Church in Birmingham, Alabama that resulted in the deaths of four girls who were inside the church, two other young people who were killed in related incidents, and severe injuries to at least 20 others.

My father and so many other young people, were radicalized by that church bombing. They took to the streets to join civil rights protests (having only just participated in one of the largest to take place in Washington just weeks earlier). At the end of a tumultuous decade of activism that included sit-ins, freedom schools, voter registration efforts, anti-war protests, and the election of Richard Nixon, many of those young people continued their work in different arenas. My Dad went into academia, while others went into business, entertainment, journalism, public service, and other fields.

Looking at those four faces frozen in time (which I have done many, many times), I think of what could have been had those young women not be killed in that church. What if the casualties had been four adolescent young men or four older deacons? What if the church members had heeded the warning call and evacuated the premises? What if one or more of the bombers had a sudden change of heart about bombing a place of worship? What if...

When we recall these historical tragedies and ask these questions, we realize that the answers are complicated. We might not be where we are at this current moment. We wonder about what could have been and realize that even horrific incidents serve a purpose in shaping those of us who survive. Their deaths were not in vain.

For years, my Dad told me how this incident impacted him as a young man. How he transferred to Howard University from Merrimack College to be more involved in the movement. How he met Stokely Carmichael and rode with him to Mississippi during the summer of 1966 against my grandmother's wishes. How the events of 1968 left him disillusioned. How he and his friends gravitated to Pan-Africanism which is how their children have African names like Ayanna, Mossi, Sekou, Massai, and Nia. How his commitment to black political empowerment meant that he refused to move to the suburbs, even during the crack epidemic.

How I believe that when the young people from Parkland, Florida led a march on DC earlier this year, mobilized by the senseless tragedy at their school, people like my Dad (their grandparents) saw shadows of themselves.

To the some who question why we insist that we will never forget those four girls, I note how we insist on remembering the nearly 3,000 who died on September 11, 2001. That despite the claims of our current President, who somehow believes that he did everyone a favor by merely being born, we will remember the nearly 3,000 lives that were lost in Puerto Rico after Hurricane Maria. We will remember those lives lost during Hurricane Katrina, at Sandy Hook Elementary, in Chicago, and those who die daily in this opioid crisis. For every tragic death that we recall--whether in war, natural disaster, senseless violence, or even by accident, on those dates radicals are born.

Radical parents who run for elected office in their child's memory. Radical classmates who advocate for legislation to avert future tragedies. Radical children and siblings who march in the streets. Radical artists who write lyrics and paint murals and film documentaries to express our pain. Radical educators, journalists, entrepreneurs, and activists.