I was in packing mode on Sunday morning as my family prepared to vacate our hotel room and as always, it was my job to manage that aspect of our departure. I think it was shortly after the Hub took the bags and the Kid down to the lobby for check-out that this news was the lead story: 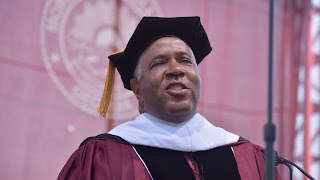 It took me a minute to process what I had just heard, but again, when struggling to make the late check-out, one must focus on the task at hand. It was not until we were on the way to the airport that I took time to really absorb the significance of this gift. Mind you, I had heard of Robert F. Smith because as one of a handful of Black billionaires, his money moves are always BIG news. When it was announced that he would be the commencement speaker, I figured it was in an effort to coax enough money from him to fund some new construction and add his name to a building or two on campus. Because that is what insanely rich people do.

Except, in the tradition of insanely rich Black people who get invited to speak at Morehouse College, there is always a twist. Somehow, these young men inspire rich Black people to invest in them personally. Oprah did it. Ray Charles did it. The comedian who used to be America's Dad did it (well, actually his big investment was at Spelman, but his late son was a Morehouse Man and he gave them a substantial gift as well). There are so many names among the Who's Who of Black folks that have supported Morehouse in some way that it is easy to lose track.

So before you read any further, let me simply say that if you intend sing in the chorus of haters who: (1) complain that certain HBCUs always receive these types of gifts; (2) are pissed that your graduation speaker only offered advice; (3) are mad that his wife isn't Black; and/or (4) just live to complain because that is the only way you get attention, you can stop here.

Let's be very clear about what Brother Smith (now that he is an honorary Morehouse Man) did in pledging to pay off their student loan debt. He gave those young brothers a clean financial slate upon which empires could be built. He helped their parents. He improved their credit ratings. He cleared the pathway for young brothers to follow dreams instead of chasing dollars. He saved marriages, delivered healthy babies, funded new business ventures, greenlit screenplays, built clean water wells and schools in Africa, fed starving artists, burnt mortgages, funded new treatments for cancer and other chronic diseases, closed the digital divide, and otherwise changed life trajectories in all kinds of untold ways. Brother Smith applied venture capital principles and determined that a $40 million investment in these 396 young men would reap greater benefits than etching his name on the facade of a building.

But enough about him because there are so many news articles circulating today about this man that I doubt he will get a full night of sleep in the coming weeks. Folks will be coming out of the woodwork for his money. However once the hooplah does subside, I hope he has inspired a renewed interest in HBCU philanthropy by the so-called Talented Tenth. But not just among the summer in the Hamptons/Martha's Vineyard set, but it needs to challenge all of us achieving Negroes to #HBCUJustGive.

I know, I am a scratched record with respect to that point, but the beauty of this gift is how it should inspire more of us to touch young lives through alumni giving. I may never be able to write a check for someone else in an amount that would change their life, but who can say that I haven't already? Perhaps the modest amount of money I have donated paid someone's overdue rent or maybe it helped someone else cover the cost of books for a semester. College costs a lot more than just tuition, and it is possible that the amount of money my classmates raised since December could have paid for a full year, including room and board, and other expenses.

Those are examples of the type of support that we can provide on the front end or during the course of matriculation for some students. Our support is also needed by the institutions directly in order to expand academic programs, fund special initiatives, or even to rehabilitate/replace crumbling infrastructure. My freshman year dorm still doesn't have air conditioning, which I could laugh off as a rite of passage...or I can acknowledge the fact that it has been 29 years since I endured that late summer Georgia heat and we weren't dealing with climate change then.

Thus, the fundamental question raised by Robert F. Smith's generosity is what can I do.

My answer: I can continue to use this little soap box of mine to encourage small scale philanthropy. And I can put my little bit of money where my mouth is and continue to make donations to my own alma mater as well as to advocate giving for other HBCUs. I can work with my classmates to increase our fundraising yield for 2024 because when I think about the minor miracle that was performed in six months:

If you are a hater who kept reading, ask yourself what you could do instead. How could you bless the life of a young person if you re-channeled that negative energy? If you believe that this gift was somehow unearned, look in the mirror and ask what grace you have been given in life to get you to this point. If you are critical that this was a show-boating maneuver, then I'm wondering what country you've been living in for the past two and a half years. If you are salty because you are still repaying loan debt, I can't offer much comfort from the same sinking ship, but would you really wish this burden on others? If you are waiting on another billionaire bailout, let me know what Betsy DeVos offers by way of loan forgiveness.

You do not need to be rich to make a difference. Generations of Black people with far less than we have today built these institutions with skills and ingenuity. Our job is to sustain and expand for the generations that follow us. So in the words of the man who kept another alleged billionaire out of the news cycle for a good 24 hours, "We are enough to take care of our community." #HBCUJustGive
Posted by Ayanna Damali at 9:00 PM