In celebration of Star Wars Day - May 4th (as in May the Fourth be with you...), I decided to update this piece a little.

A while back I wrote an entire piece recently about a old movie that I used to love, by the end of which I came to the conclusion that after all of this time, the object of my affection was really its star Christopher Reeve. And I still love him because it's hard to get over crushes that you've carried around for decades (even when the object of that crush is gone). So let's take a moment to appreciate another 80s-era icon whom I also love even more, who is still with us, and whose appearance in the most recent Star Wars trailer got me to shouting Hallelujah... 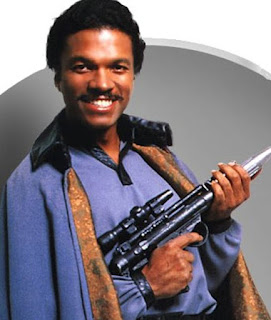 Still old enough to be my Daddy, which is why the entire notion of having a crush on him all of these years seems a bit crazy. It isn't when you consider that in my early youth, there were not that many Black action heroes. There were not that many Black leading men. In fact, when I think back to the 80s to compile a list of Black heartthrobs, this is who made the cut:
Todd Bridges
Haywood Nelson
Kristoff St. John
Kevin Hooks
The dude who guest starred on the Facts of Life as Tootie's boyfriend
(And damn, I had to think really hard to come up with this list...)

Important Edit: The Hub raised the issue of scarce Latino and Asian heartthrobs during this same time period, and it was agreed that I needed to include a few honorable mentions: Bruce Lee (who was dead by this point); Bruce Li, the doppelganger; Mario Lopez (who was not a star until the end of the decade); and Menudo.

Mind you, there were other Black men on television and in the movies, but I'm sorry, nobody was checking for Mr. T. And while Carl Weathers had been on the scene since the 70s in Rocky, I just don't remember him getting that same level of sex symbol attention. I definitely did not think of Eddie Murphy as an 80s sex symbol (not even in that red leather outfit), so unless one made an effort to notice other Black actors such as Clifton Davis on Amen, the brother from Matlock, professional athletes (dare I say O.J. Simpson), or LeRoy from Fame*...it was all about BILLY DEE.

* or Michael (Michael DeLorenzo from the same show)

The way I remember it, we went to see The Empire Strikes Back at the movies one summer with no idea that Hans Solo had a Black friend. I won't make the obvious leap to suggesting that we didn't think there were Black people in space, because we knew better, but that thought would not have been entirely unfounded given the times. And despite the betrayal that should have made us hate Lando Calrissian it did just the opposite. Every Black boy left the theater wanting to be Lando with a light saber even though he wasn't a Jedi (before the appearance of Mace Windu). And those of us who were too young for unpure thoughts wanted Lando to be our Daddy...

If there was a need for a romantic Black male lead, it was Billy Dee because Sidney Poitier and Harry Belafonte were too old, James Earl Jones looked exactly as he does now, and Greg Morris wasn't around enough for us to fully appreciate. Sure there were other good-looking Black men who got our attention, but no one memorable appeared on the scene until after 1984. I have no idea why that becomes the magical year when things changed, but suddenly we had options. We got Denzel Washington as the young Black doctor on St. Elsewhere, Blair Underwood and Jimmy Smits as lawyers on L.A. Law, and Philip Michael Thomas as a detective on Miami Vice. We had Black super-couples on our favorite soap operas. There were guys our age with regular TV gigs like Malcolm-Jamal Warner, Carl Anthony Payne, and Alfonso Ribeiro. And there was New Edition!

By the end of the decade, Billy Dee sightings became rare and unexpected, like when he showed up as Harvey Dent in Batman or as Berry Gordy in The Jacksons. By the 90s, there were plenty of good-looking Black leading men all over Hollywood, so Billy Dee didn't have to work as hard. Instead, he could stretch himself in a role that allowed him to be a cranky recluse or old player, or as a parody of himself as an eternal lady-killer (so it only made sense that he would be the mentor to Tim Meadows' The Ladies Man).

I'm not really heading anywhere with this piece except to acknowledge the original Daddy Mac/Most Interesting Man in the World because it occurred to me that as I have been writing remembrances and appreciations and revisiting pop culture icons from my past, Billy Dee is still alive and deserves that same love. He still looks good, still has that swagger...and hey, if they pulled Harrison Ford and Mark Hamil out of mothballs for these sequels, why not Billy Dee too? And even if he only gets to be in the new Star Wars movie for a few scenes before they kill him off, that's just enough to get me to the movies.

Posted by Ayanna Damali at 6:23 PM